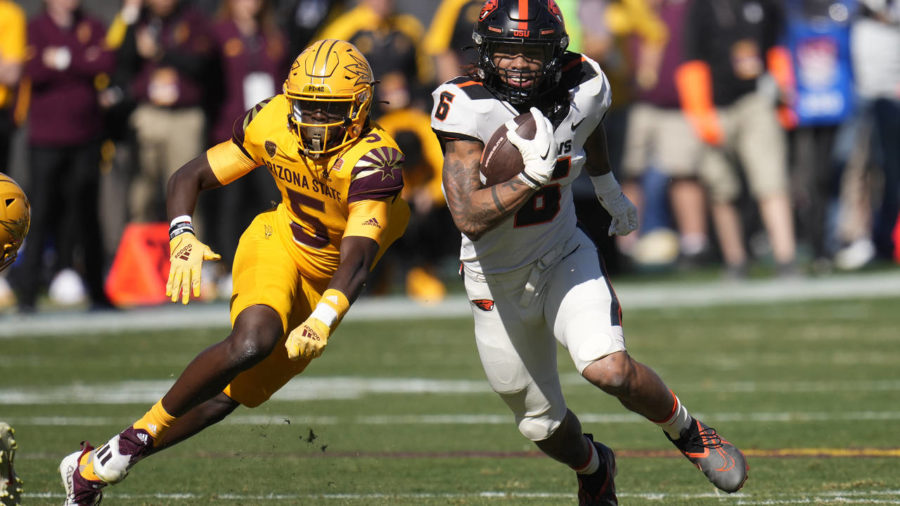 (Tempe, AZ)  This was the final home game of the 2022 season for the Sun Devils and homecoming as well.

The Beavers of Oregon State came in already bowl elegible at 7-3, so they were looking to upgrade their status in the bowl pecking order.

Oregon State in the twenty times they’ve played in Tempe has only won twice. Sun Devil Stadium has been a thorn in their side.

The Devils, 3-7 will be to play the spoiler. This has been a tumultuous season in Tempe with two different head coaches. 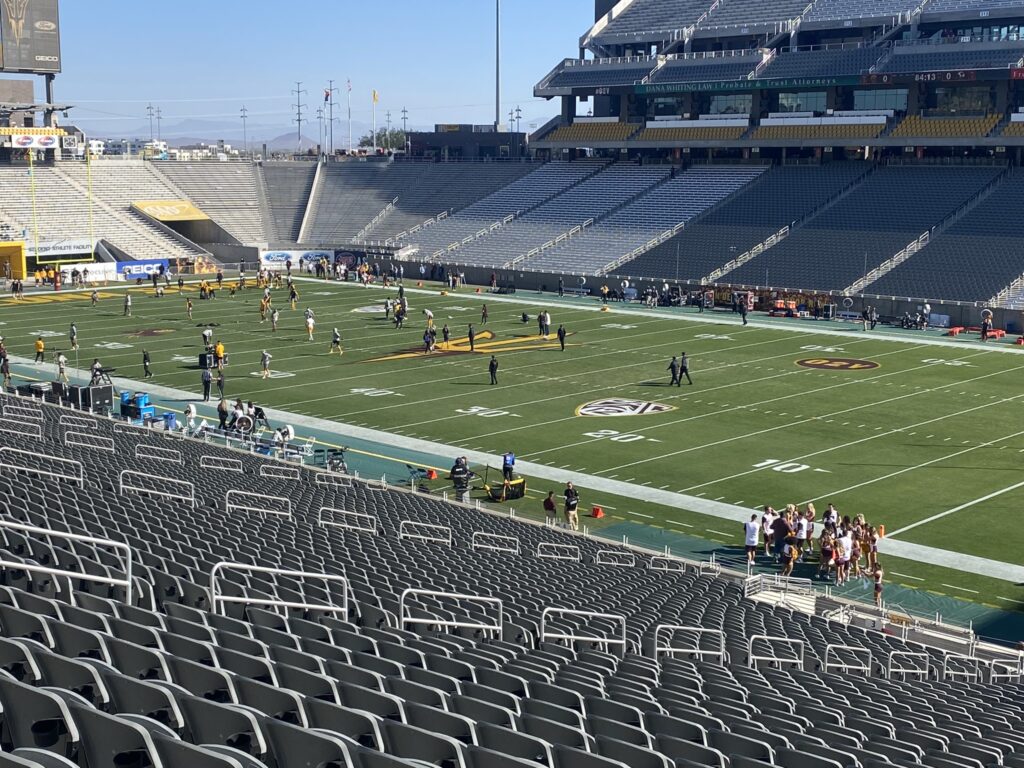 Beavers got on the board on their first possession as Damien Martinez ran it in from the five yard line. They didn’t have much problem dissecting the ASU defense. 7-0 OSU midway through the opening  quarter.

The Sun Devils drove the ball on their second possession and got to the OSU fourteen but Carter Brown’s chip shot field goal attempt hit the right upright and fell back into the end zone.

In the second quarter, Oregon State moved the ball efficiently with a balanced rush/pass offense.

OSU missed a 44 yard field goal attempt sailed wide right, a big stop defensively for the Devils as the score remained 7-0 with 11:53 left in the first half.

Arizona State had little problem moving the ball between the thirty’s but would bog down trying to get to the red zone.

Both teams had issues on offense sustaining drives early in game. 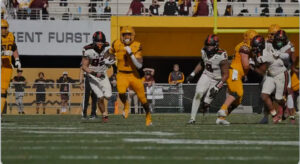 X Valladay popped off a thirty nine yard run and then two plays later ran a misdirection play with a nice cutback into the end zone to tie the game at 7-7 with just under two minutes left in the half.

Passing was spot on in the Beavers drive as they used their tight end for thirty five yards to move into ASU’s side of the field and followed it with three plays 21 yard pass to Jack Velling to go up 14-7.

Oregon State got the ball first in the second half and with the aid of a pass interference penalty deep in Sun Devil territory scored on a 10 play 83 yard drive with Damien Martinez running the final 11 yards to extend their lead 21-7.

Beavers on defense made key adjustments and ASU offensive attack was forced to use short passes and few rushing plays because of the two touchdown deficit.

Oregon State in workman like fashion chewed up the clock keeping the Devils offense on the sidelines most of the third quarter.

Third string quarterback Gulbranson put the apparent nail in the coffin at the end of the third quarter with an 8 yard run untouched by the porous ASU defense to go up 28-7.

The Devils playing uninspired ball seemed reluctant to have any sense of urgency down three touchdowns. 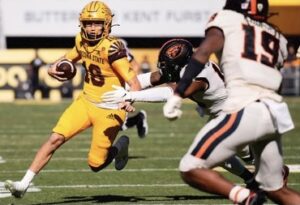 Valladay’s effort was one of the few bright spots for Arizona State. He went well over 100 yards rushing and 1.000 yards on the seasons.

To sum up the play of the Sun Devils, an OSU punt was muffled by Javen Jacobs following a nice defensive series stop. There’s no reason to try to field a punt going away with your back to the play inside the twenty yard line. After the muff, the Beavers pounced on the ball but settled for a field goal to make the score 31-7 for the visitors with 9:38 left in the game.

Beavers missed a short field goal with just seconds remaining but it didn’t matter as time ran out and Oregon State won its first game 31-7 in Tempe since 2009.

There certainly was a lack of extra effort and execution today for ASU. To only score a single touchdown when Valladay ran for 109 yards on 13 carries and Bourguet completing 20 passes but only for 122 yards is well under the point production needed to win.

Oregon State took away the downfield pass all day, forcing everything short.

ASU didn’t adjust well to everything the Beavers threw at them. Coach Aguano seemed like he and the staff were two plays behind.

With only 276 total yards for the game and only 13 first downs, OSU had the Devils by the tail and wouldn’t let go. The Devils had no answers.

Arizona State will limp into Tucson for Friday’s Territorial Cup wondering what happened here at home.

With both Arizona and ASU having down seasons, the final game will give one school a bit of a relief and bragging rights for the State.

No bowls for either school, so you can bet the Territorial Cup will be their season. Neither wants to be on the short end of the final score.