The Aztecs managed three hits for the first game but came back to earn a one-sided victory in the second game. Sophomore Sierra Gentry and freshmen Mya Cabral (Pueblo HS) and Alese Casper led the offensive charge.

Game 1: Paradise Valley CC Pumas 8, Pima CC Aztecs 0 (6 innings): Cabral and Casper each went 1 for 3 and sophomore Chandler Arviso finished 1 for 2 as the Pumas scored six runs in the 5th inning and two in the 6th inning.

Freshman Paige Adair took the loss (16-3) as she pitched five and two-third innings giving up eight runs (two earned) on seven hits with four strikeouts and one walk.

Game 2: Pima CC Aztecs 12, Paradise Valley CC Pumas 4: The Aztecs trailed 2-0 going into the 5th inning but rallied back in a big way scoring five runs in the 5th, four runs in the 6th and three runs in the 7th.

Gentry hit a two-run RBI double to score Casper and Prieto to make it 9-2 in the 6th inning. The Aztecs loaded the bases again in the 7th as Cabral and Arviso hit RBI singles to help Pima’s cause.

Casper picked up the win (3-5) as she pitched a complete-game giving up four runs (four earned) on 10 hits with one strikeout and one walk.

The Aztecs are back at the West Campus Softball Field on Tuesday when they host South Mountain Community College in an ACCAC doubleheader. The first game starts at 1:00 p.m. 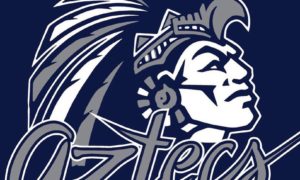