(Indianapolis, IN)  For a four-set match, this was an instant classic despite the fact the Park University Gilbert volleyball team ended up on the losing end of a 3-1 (20-25, 28-26, 19-25, 24-26) score against Marian University at the MU Arena in Indianapolis, Ind., in the opening round of the NAIA Volleyball Championships.

“I cannot be prouder of these girls,” said Buccaneer head coach Shawn Close. “This loss is going to sting and will be especially painful for the players who won’t be back next year. But they should hold their heads up high for what they have accomplished in such a short period of time.”

The first set saw the Buccaneers get off to a slow start falling behind 9-4 before a 7-3 run closed the deficit to just one. This is as close the Bucs would get in the set as Marian won the next two points and managed to maintain the advantage for the remainder of the set, building the advantage back to a six-point lead before finishing with a 25-20 win.

The second set was a back-and-forth affair with Park Gilbert leading by as many as four for a good portion of the set before 4-0 run by Marian gave the Knights a two-point lead. Then down 24-22, the Buccaneers saved two set points with a kills from Railey Druxman and Makenna Busse knotted the match at 24 and forced a Marian timeout. The Knights then got a kill from Jai-Lyn Norwood to give them their third set point. Park answered with a crosscourt kill from Maggie Scranton to erase it.   The Bucs then got their first set point off of a kill from Busse, but Skyler Van Note from Marion responded to tie it once again.  A Van Note attack error gave the Bucs their second set point and the Bucs converted with an ace from Druxman, and the match was knotted at a set apiece.

The third set might be the story of the match for the Buccaneers. Park controlled play for most of the set and led 16-14 before Marion went on a 7-0 run with four of the points coming via a Marian block. The Knights are sixth in the country in blocks per set and used their prowess in this area to take control of the set. The Buccaneers were never able to recover and lost the set 25-19 as Marion finished on a 11-3 run.

In the fourth, the match could not have been any closer, after Marion took the lead early, Park worked its way all the way back to tie the match at 16. Then the match was tied at 17, 18 and 19 before the Bucs went on a 3-0 run to take a 22-19 lead and force a Knights time out. Out of the time out Marion responded with a 4-0 run of its own to make it 23-22.  Park then came right back to take the next two points and had set point to send the match to a fifth set.  But Marion would end things on a Madison Brooks kill to tie the match, then Norwood slipped a kill past the Bucs block and then an attack error by the Bucs ended their season. 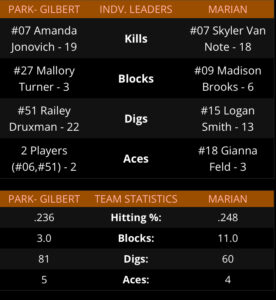 Park Gilbert lived and died by its aggressive nature all season. Tonight was no different. The Bucs had more kills than Marian (64-57) on fewer attempts (157-165) but committed 11 more attack errors (27-16) and three more service errors (7-4).  The Bucs defense was stellar with 81 digs, fifth most in school history in a match. Marion turned the match with its play at the net posting 11 blocks to only three for Park.

Individually. Jonovich had 19 kills which ties the third most in her career, a feat she has now accomplished six times. Jonovich also had a season high 10 errors as she hit a season low .180. She also added 14 digs for her ninth double-double on the season. Busse had 14 kills and hit .619 in her final match as a Buccaneer. Druxman posted her eighth double-double with 11 kills and career high 22 digs. She hit .219. Annika Wallace (27) and Jenifer Lauer (22) combined for 49 of the Bucs 60 assists. Druxman and Lauer both had two aces in the match.

Marian moves on to pool play in Sioux City, Iowa while the Buccaneers bid farewell to a 2022 season which had its ups and downs but ultimately was the most successful season in its short history.  The Bucs set the school record for wins with 24. They are in the top 10 in the national rankings in attack percentage. They are in the top 20 in kills per set, total kills and service aces.  They were 23rd in the country in assists per set. Jonovich won Cal Pac Conference Player of the Year and is a virtual lock to earn her second NAIA All-America nod. 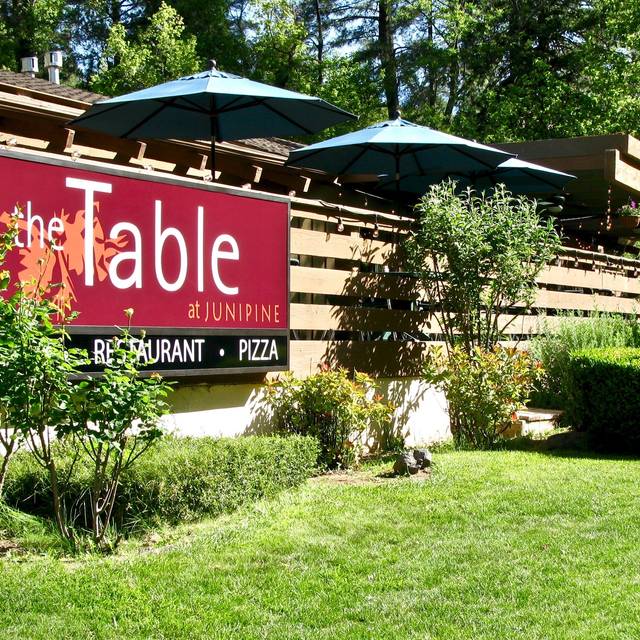