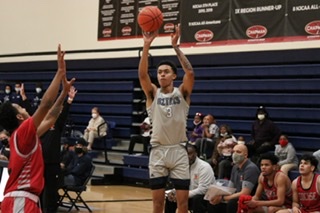 The No. 9 ranked Aztecs (Division II) fell to No. 25 Cochise College (Division I) 87-78 as Pima returned to ACCAC conference play.

The Aztecs held on to a 70-66 lead and called a timeout with 7:10 left but the Apaches closed out the game on a 21-8 run. Cochise took their biggest lead of the game at 84-74 but sophomore Daniel Moody (Walden Grove HS) hit a three-pointer to bring it back to a single digit deficit and Pima called timeout with 1:43 left.

The Aztecs held a double digit lead of their own early in the game at 19-7 with 13:48 left in the first half. Pima clinged to a 44-40 lead at halftime but Cochise outscored them 47-34 in the second half.

Freshman Itury Kitt (Eastpointe HS) was the other Pima player in double figures as he finished with 11 points.

The Aztecs will be on the road for the next three games against ACCAC Division I teams. They’ll play at Eastern Arizona College on Saturday at 4:00 p.m.