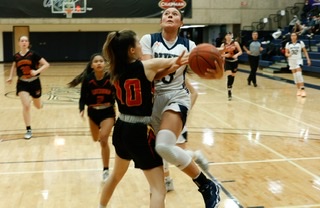 (Tucson, AZ)  The Pima Community College women’s basketball team (12-4, 5-2 in ACCAC) got back to ACCAC conference play on Wednesday as it hosted Cochise College (6-9, 3-5) at the West Campus Aztec Gymnasium.

The Aztecs led 48-47 to start the fourth quarter but the Apaches went on a 15-3 run in a little over six minutes to put Pima down by double digits at 62-51. The Aztecs called a timeout with 3:48 left.

The Aztecs put together a 7-0 run with freshman Matehya Aberle’s basket, two converted free throws by freshman Luisayde Chavez (Rio Rico HS) and a three-pointer by Chavez to cut the deficit to 62-58.

The Aztecs called another timeout with 2:07 remaining. Aberle scored another goal to cut it to 62-60 but the Aztecs couldn’t tie it up and Cochise scored the final points of the game.

Aberle led the Aztecs with a team-high of 15 points to go along with nine rebounds. Chavez finished up with 14 points and nine rebounds.

The Aztecs will hit the road for the next three games as they face off against ACCAC Division I teams. They will play at Eastern Arizona College on Saturday at 2:00 p.m.