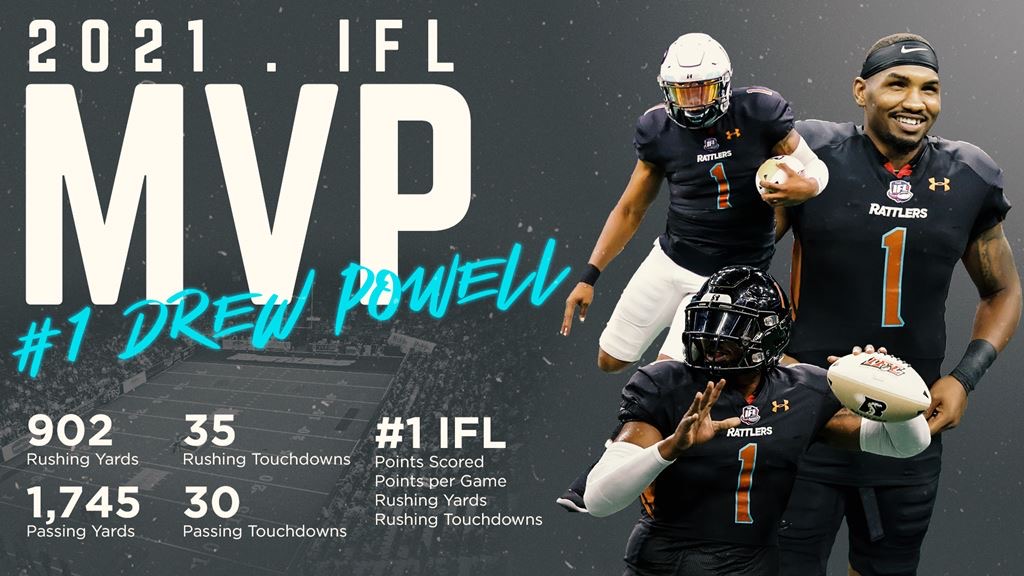 Drew’s efforts have not only led Arizona to a 14-2 overall record, but the 2021 United Bowl on Sunday.

The honor is Powell’s second MVP award of his career (Iowa 2018).

“Drew has been a constant leader on and off the field for our organization,” Head Coach Kevin Guy said. “He is a dynamic quarterback and has a very strong work ethic”

Behind QB1, Arizona imposed its will on the ground with a league-high 63 total rushing TDs, which resulted in the best overall rushing attack (117.8 YPG) of all IFL teams in 2021.

A testament to his league dominance, Powell throttled in multiple rushing scores every game but three this season and scored more than three rushing TDs in seven of the 16 games played.

In the passing game, Powell lead the league in completion percentage (69.4 YPG) and placed second in quarterback efficiency (165.1). Drew’s passing TD total (30) was good for third best, and his total passing yards (1,745) slotted him at No. 4 in the IFL.

“I have really enjoyed working with Drew and watching him continue to grow his brand,” Guy said. “We appreciate everything he’s done for this organization and in the community.”

The two-time MVP has one final test left, and that’s lead the Rattler offense against the best scoring defense in the 2021 United Bowl to close out his incredible season on Sunday.