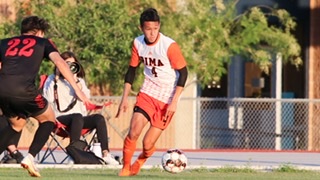 The No. 2 ranked Aztecs defeated the Artichokes 1-0 handing them their first loss of the season.

Sophomore Brian Vu (Rincon HS) broke a scoreless tie early in the second half as he scored in the 46th minute with an assist from fellow sophomore Minho Cha.

The Aztecs’ defense was able to hold Scottsdale to just two shots on goal for the game. The Aztecs finished with four shots on goal and sophomore Juan Suarez (Desert View HS) had two saves.

The Aztecs are back at the West Campus Aztec Soccer Field part of the Chapman Automotive Sports Complex on Tuesday when they host Yavapai College. Game time is set for 7:00 p.m.