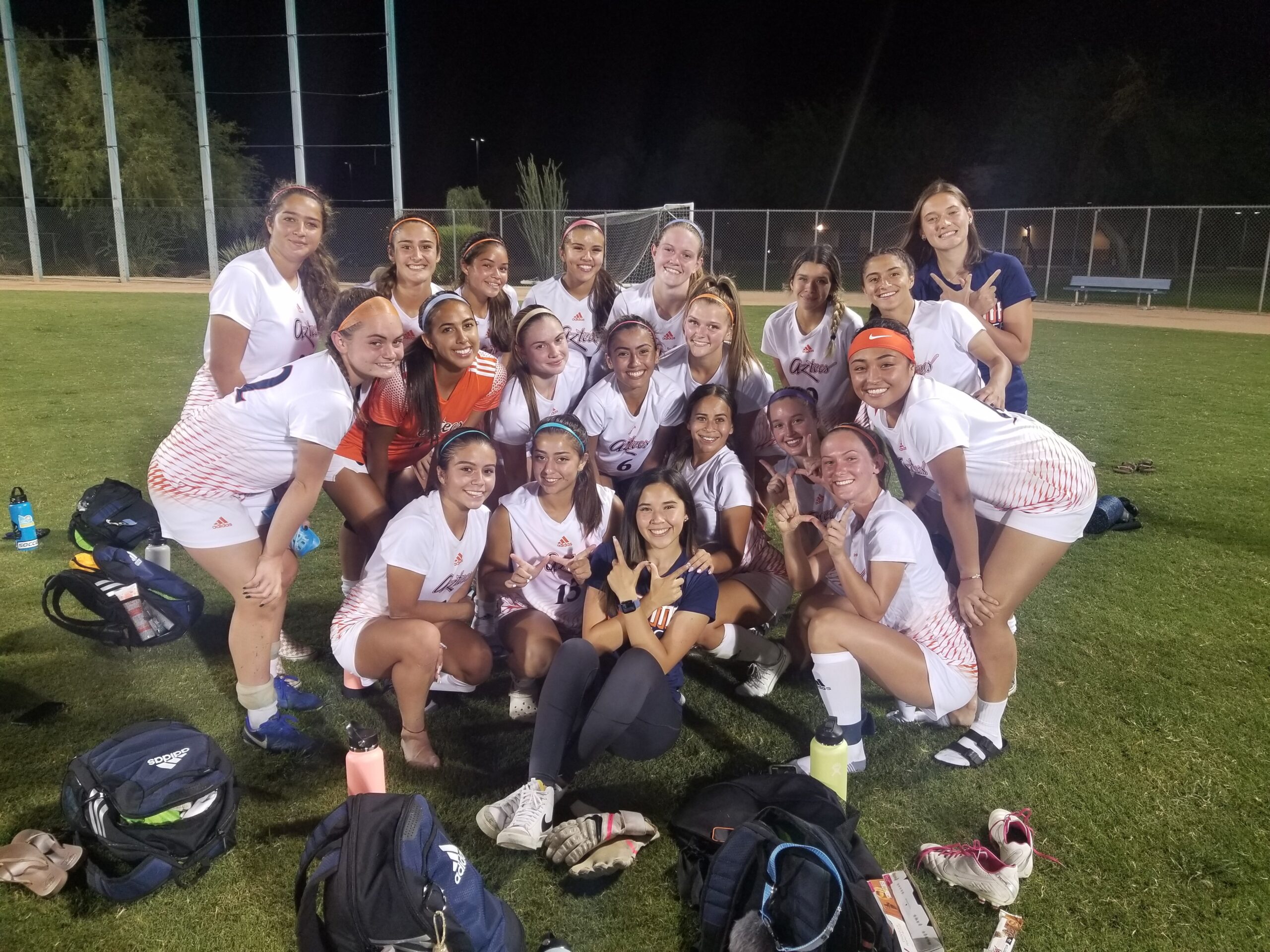 The Aztecs defeated No. 1 ranked Phoenix College 2-1 snapping the Bears’ 14-game winning streak. Phoenix went undefeated at 14-0 during the 2020-21 season, capping it off by winning the NJCAA Division II National Championship.

The Aztecs got on the scoreboard in the 31st minute when freshman Mari Acosta (Sahuarita HS) scored on a cross pass from sophomore Kaitlyn Bassett (Sabino HS). The Aztecs led 1-0 at halftime.

Sophomore goalkeeper Angelina Amparano (Salpointe Catholic HS) made a tremendous jump save that hit the top of the goal-post and got cleared out to keep it a one-goal advantage.

The Aztecs went up 2-0 after Bassett had her second cross-pass assist of the game. Sophomore Alyssa Kopach (Ironwood Ridge HS) scored the goal in the 68th minute. The Bears got on the board a minute later with a goal by Bailey Norris to cut it back to a one-goal difference.

“It was a very important goal for us, it was all of us working together,” Kopach said. “Kaitlyn (Bassett) got it on the left side and crossed it over. It kept us going and kept us in the fight the whole time. Last year was a hard season for us to get our chemistry together and coming out our first game to beat the national champs, is a great feeling.”

“It was a great opportunity knowing we were playing the national champions. Not everyone gets to have that opportunity as their home opener,” Amparano said. “I was just glad that we came out with the win. We showed up big and made Tucson proud.”

Amparano believes this win will help set a standard for the entire season.
“Knowing that we can score on a good team, that’s really good for the whole season. I was losing my voice and yelling the whole game and telling them ‘no shot’ and seeing who’s open and who needs to get marked,” Amparano added. “That’s the best thing I can do for my team is being the eyes that they don’t have behind them. I’m really glad we came out with the win. This is a really big confidence booster; we just beat the national champions. It sets the pace that we can beat anyone in the conference.”

The Aztecs will play at Glendale Community College on Tuesday. Game time is set for 4:30 p.m.