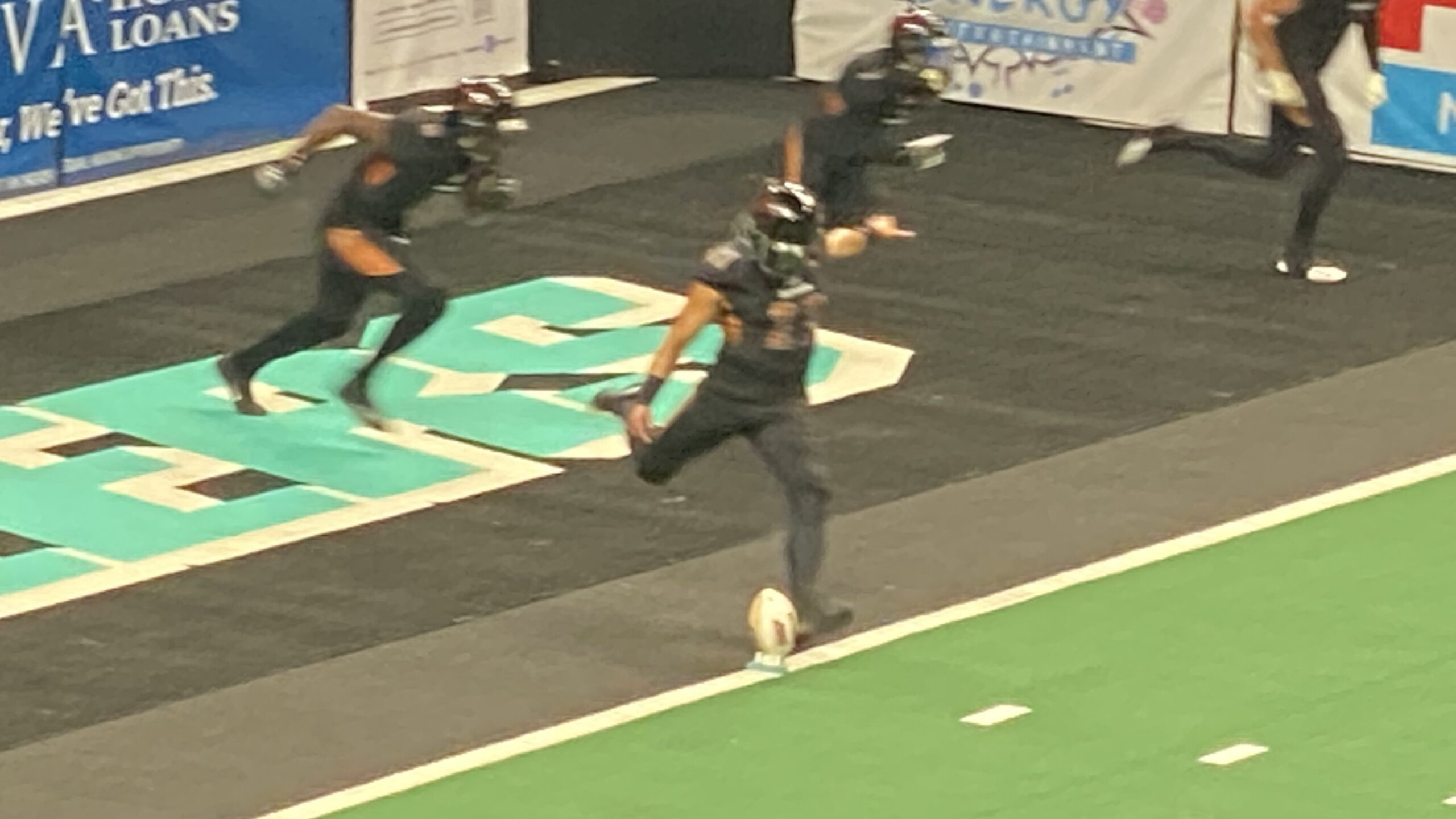 (Phoenix, AZ)  Today in the Snake Pit, the hometown Rattlers took on th Sioux Falls Storm in a first round IFL Playoff Game.

The Snakes came in as the #1 Seed and will have home field through the Playoffs.

Both teams were quite familiar with each other. In 2017, the Rattlers defeated the Storm in the United Bowl, 50-41. The next season 2018, Sioux Falls and Arizona met in the semifinals, and it was the Storm who prevailed in overtime by a score of 69-68. In 2019, Sioux Falls beat Arizona in the United Bowl after mounting a second half comeback, 56-53. 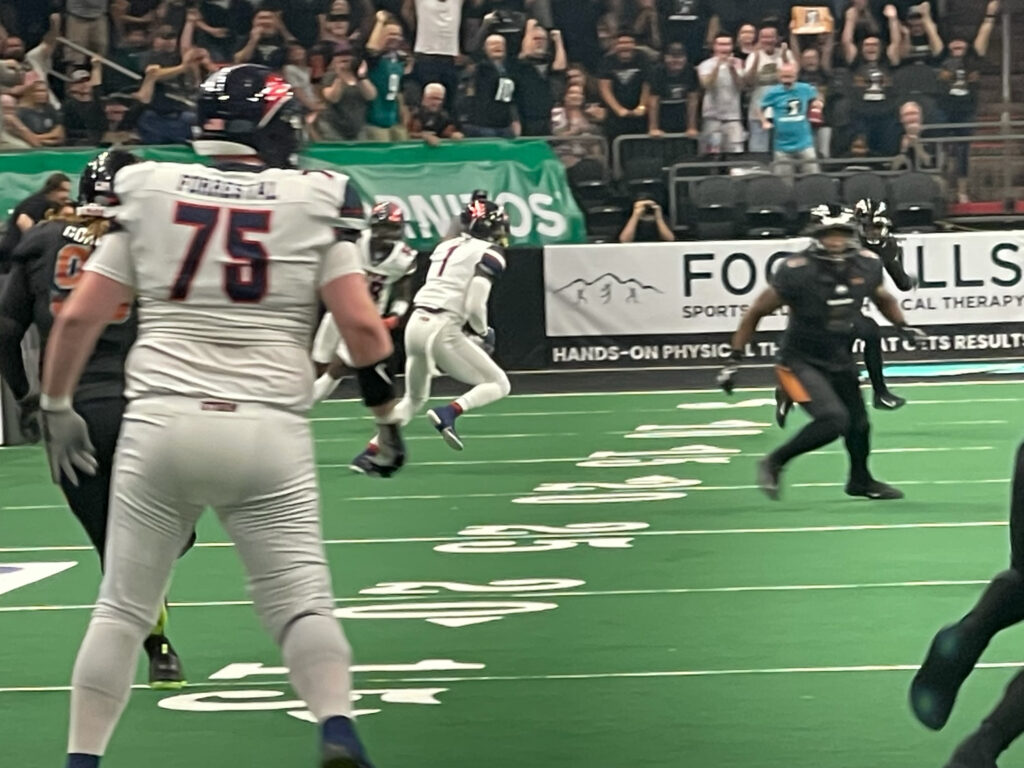 It didn’t take long for the crowd to explode as the Rattlers’ Dillion Winfrey picked off a Tommy Armstrong pass and two plays later, Arizona scored on a Drew Powell to Jarrod Harrington pass in the end zone. The point after was wide, Snakes up 6-0 at the 11: 09 mark if the first quarter.

Then, the Storm found the key and three plays lager they tied the score at 6-6 with Lorenzo Brown hooking up with Alonzo Moore from twenty six yards out. Their PAT failed with 7:26 left in the first quarter. 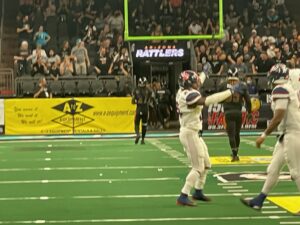 The fast and the furious pace continued as the ensuing kickoff was nearly taken back all the way. Snakes were in good shaped at the thirteen yard line of Sioux Falls.

On second down from the six, Powell took it around the left end from the six yard line to score and put Arizona up 13-6  with 3:04 left in the opening quarter

Both defenses were on their heels at times in the first quarter as both offenses found their groove after a slow start by Sioux Falls;

Just as the first quarter came to a close the Snakes took over on downs as Sioux Falls couldn’t convert on a fourth down pass.

The Rattlers had a slight edge on total yards 43-37 and surprisingly held the Storm to just one first down in the opening quarter.

First play from scrimmage for Arizona, Powell found a wide open Troy Pelletier in the corner of the end zone from twenty five yards out. Zona up 20-6. 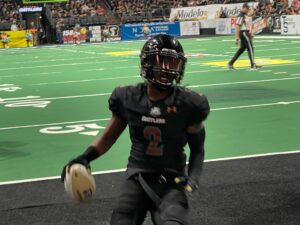 Powell kept the offense clicking and was putting a lot of pressure on the Sioux Falls defense.

Nick LaSane scored as Powell went through his progressions and found the running back open at the last second. The Rattlers extended their lead 27-6 with 3:19 left in the half.

With a minute left in the half the Storm’s running back Nate Chavious broke a couple of tackles and took  it to the house from thirty three yards out. Snakes led 27-13.

A minute on the clock is an eternity in Indoor Football as the Snakes scored on a Powell to Haley pass with just fifteen seconds left to go into the locker room with 34-13 lead. 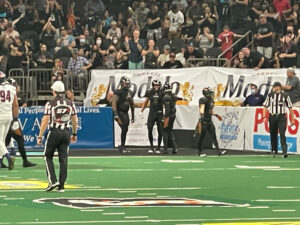 On the last play of the half Sioux Falls kicker Douglas Parker kicked a forty seven yard field gold to finish off a wild first half, 34-16.

The Rattlers came out in the third quarter a bit slower and had to convert a forth and inches to keep the drove alive.

Jamal Miles took a nice misdirection handoff and scampered in from the two yard line and give Arizona a 41-16 lead with 9:49 left in the third quarter.

Sioux Falls keep that drive alive as well as other first half Rattlers drives with costly and untimely penalties.

The kickoff as taken by Chavious coast to coast, but a holding penalty negated the sixty nine yard run. Arizona’s defense held and got the ball back.

Powell threaded the needle down the left sideline to Miles in stride to put the ball at the Storm’s six yard line. After a holding penalty, LaSane caught a pass in the flat to score and the Snakes were cruising 48-16 with 3:46 left in the third quarter.

Using most of what was let of the third quarter, Sioux Falls scored Nate Chavious ran the ball eleven yards for the score and the two point  conversion was also good as a result of an Armstrong rush. 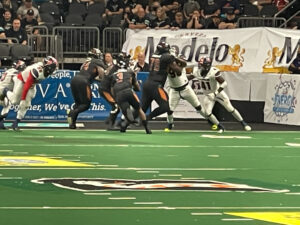 Only cutting he lead in half, the Storm was still trying to get back into striking distance.

As the final stanza opened, it only took Powell 1:35 to get the Snakes back to the end zone via a seven yard keeper and Arizona was back up by thirty one points, 55-24.

Sioux Falls offense knew that trading touchdowns with the high powered Rattler team was fruitless, nevertheless they continued to grind out yards and at the 8:33 mark Moore caught a pass from Armstrong and scored from the ten yard line, but the PAT once again failed, Arizona still had a commanding lead 55-30.

Back came the Rattlers who again wasted no time as backup quarterback T.J. Edwards ran in from ten yards like a pinball with his first touchdown of the game as he spelled Powell going down the stretch, Snakes 62-30 with 8:33 to go.

On the following Storm possession, Chavious broke free in the middle of the field and scored on a twenty four yards out. Still trying to gain an advantage the two point conversion pass was incomplete.

The game point total had reached 98 and that scoreboard read 62-36 with six and a half minutes left. 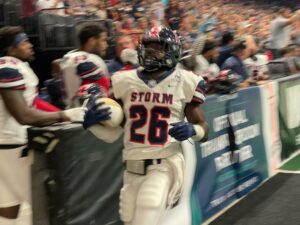 The Rattlers score their final touchdown when Edwards scored his second touchdown from the one yard line as he jackknifed like a pinball to put the point total over one hundred 69-36 after a 2:13 possession.

Brando Sheppard scored the token touchdown with under a minute left on a fourteen yard pass, but the Arizona victory was a foregone conclusion.

Arizona from the start hit on all cylinders as they scored on every possession in the game.

There were 39 points in the final quarter, most of any quarter. The most glaring factor was the Storm’s inability to stop Powell and the Arizona juggernaut.

So the Snakes move on the IFL’s Second Round as the Duke City Gladiators try to up end the league’s best team. Game time is 3:05 pm next Sunday.

Attendance was 5,802 in the Footprint Center. 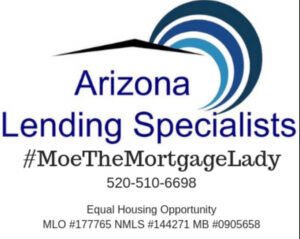