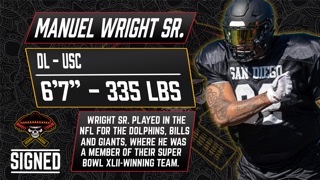 DL Manuel Wright Sr. (6‘7″, 335, University of Southern California) joins the Sugar Skulls for his rookie season in the IFL, after having spent time playing for the Dolphins, Bills and Giants in the NFL. In 2007, Wright Sr. earned a ring as part of the Giants’ Super Bowl XLII-winning team. Prior to his NFL career, Wright Sr. played two seasons at USC, where he appeared in 20 games and recorded 31 total tackles, five passes defended and two fumble recoveries. The two-time National Champion was a Pac-10 Honorable Mention selection during his junior year in 2004.