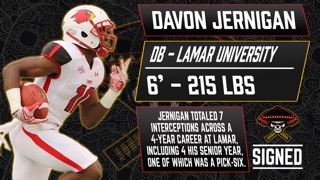 DB Davon Jernigan (6‘, 215, Lamar University) joins the Sugar Skulls for his rookie season in the IFL, after having last played for Saskatchewan in the Canadian Football League. Prior to signing in the CFL, Jernigan spent a four-year college career at Lamar, playing in 42 games and amassing 211 total tackles, 20 passes defended and 10 tackles-for-loss. Jernigan added seven interceptions throughout his college career, including four during his senior year, one of which was returned for a touchdown.