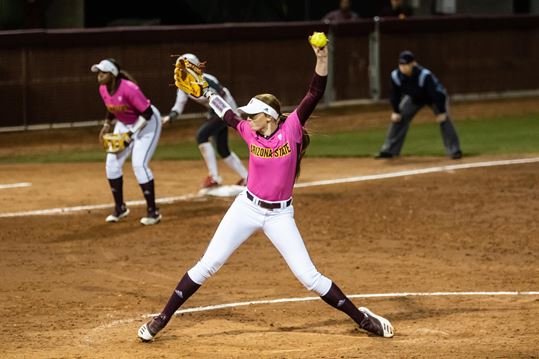 (Tempe, AZ)  The No. 22/23 Arizona State softball team opened the Littlewood Classic with an upset of No. 10 Kentucky as the finale of a two-game sweep, including Illinois State. The Sun Devils shutout the Redbirds 3-0 and outscored the Wildcats 3-2 in their first loss of the season on Friday night at Farrington Stadium.

Junior transfer Madison Preston earned her first start and third win of the season in Friday night’s ‘W’ against UK. She threw five strikeouts in 14 at-bats through four innings.

“I thought they fought. I think that’s the biggest thing and that’s something we talk about: that you’re not always going to feel your best, but what are you going to give us out on that field,” said head coach Trisha Ford. “I thought they fought like heck out there. We had some great defensive plays, and here we are. It’s good to win a tight one.”

Game 1: ASU 3, Illinois State 0
ASU landed on the board first in the bottom of the first after Kindra Hackbarth singled to right field and eventually stole second base. Her twin, Maddi, hit an RBI sacrifice fly to right field to bring Kindra home for the first run of the game.

Meza stayed busy, striking out six batters through the top of the third. With two outs in the third, K. Hackbarth doubled to left field. Bella Loomis sent her first homer of the season out of the park in a two-run home run that brought K. Hackbarth home from second base.

With a three-run lead, Meza came up clutch for the Sun Devils, forcing the Redbirds to leave five runners on base and keep them scoreless.

Game 2: ASU 3, Kentucky 2
The top-25 matchup started as a pitchers battle with ASU starter Preston pressuring Kentucky into ground-out situations. ASU’s offensive production commenced with a left line hugger from Kiara Kennedy for a double. K. Hackbarth sent a double deep to left-center, collecting the RBI on Kennedy’s earned run. Loomis then singled and advanced to second on a throwing error in UK’s right field, opening the lane to home for K. Hackbarth. The third inning concluded with a 2-0 score in ASU’s favor.

Preston and the ASU defensive continued to burn through the UK lineup, driving the Wildcats to leave three runners abandoned on base. At the top of the fifth, Meza entered the game as a relief for Preston, who finished the night with three hits, three walks, in 17 batters faced. She now boasts a 1.88 ERA and a perfect 3-0 record 27 strikeouts in six appearances.

A single up the middle and sacrifice bunt granted Kentucky a runner in scoring position. With a single to left field, UK’s runner on second rounded third base to step on home plate to bring the score to 2-1. ASU immediately answered back with their third and final run of the evening that saw Loomis score off a wild pitch with Alynah Torres at-bat. Kentucky attempted to close the lead, scoring one more run in the top of the sixth, but ASU’s pitching staff held onto the one-score lead.

Up next:
Arizona State (6-2) continues hosting Littlewood Classic on Saturday, Feb. 15 and Sunday, Feb. 16. The Sun Devils return to the field for their second doubleheader against Detroit Mercy (0-4) at 4:30 p.m., followed by a second game against No. 10 Kentucky at 7:00 p.m. at Farrington Stadium in Tempe, Ariz.