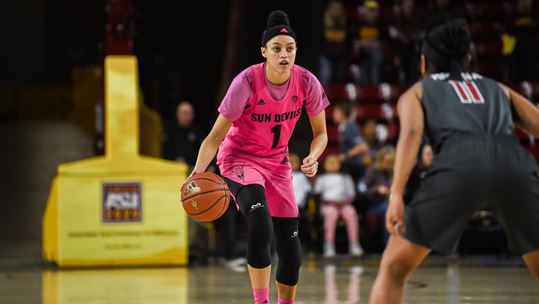 (Tempe, AZ)  Senior Reili Richardson scored 13 of her team-high 22 points in the fourth quarter to help the No. 22 Arizona State women’s basketball team hold off Washington State 62-59 on Friday night.

The Sun Devils shot 88 percent (7-8) in the fourth quarter and made their final five shots to come away with the win.

Tapley and Jayde Van Hyfte tied for the team lead in rebounds with six boards each.

After leading by as much as 12 in the first half, the Sun Devils took a 29-21 lead into the locker room.

The teams traded several baskets several times in the final period, resulting in a pair of ties and seven lead changes over the final 10 minutes.

With the score tied at 50-50 and 3:20 to go in the game, Richardson made two consecutive 3-pointers to put the Sun Devils ahead 56-50. The senior then closed out the game by hitting 5-of-6 free throws over the final 28 seconds.

Friday’s win snapped a three-game losing streak – all against Top 10 opposition – for the Sun Devils. Richardson played a big role in ASU’s last win prior to Friday as she scored 19 of her career-high 24 points in the second half and overtime, including the game-winning 3-pointer, in ASU’s 76-75 win over USC in triple overtime on Jan. 31

The Sun Devils conclude the weekend on Sunday (noon MST) when they host Washington at Desert Financial Arena.