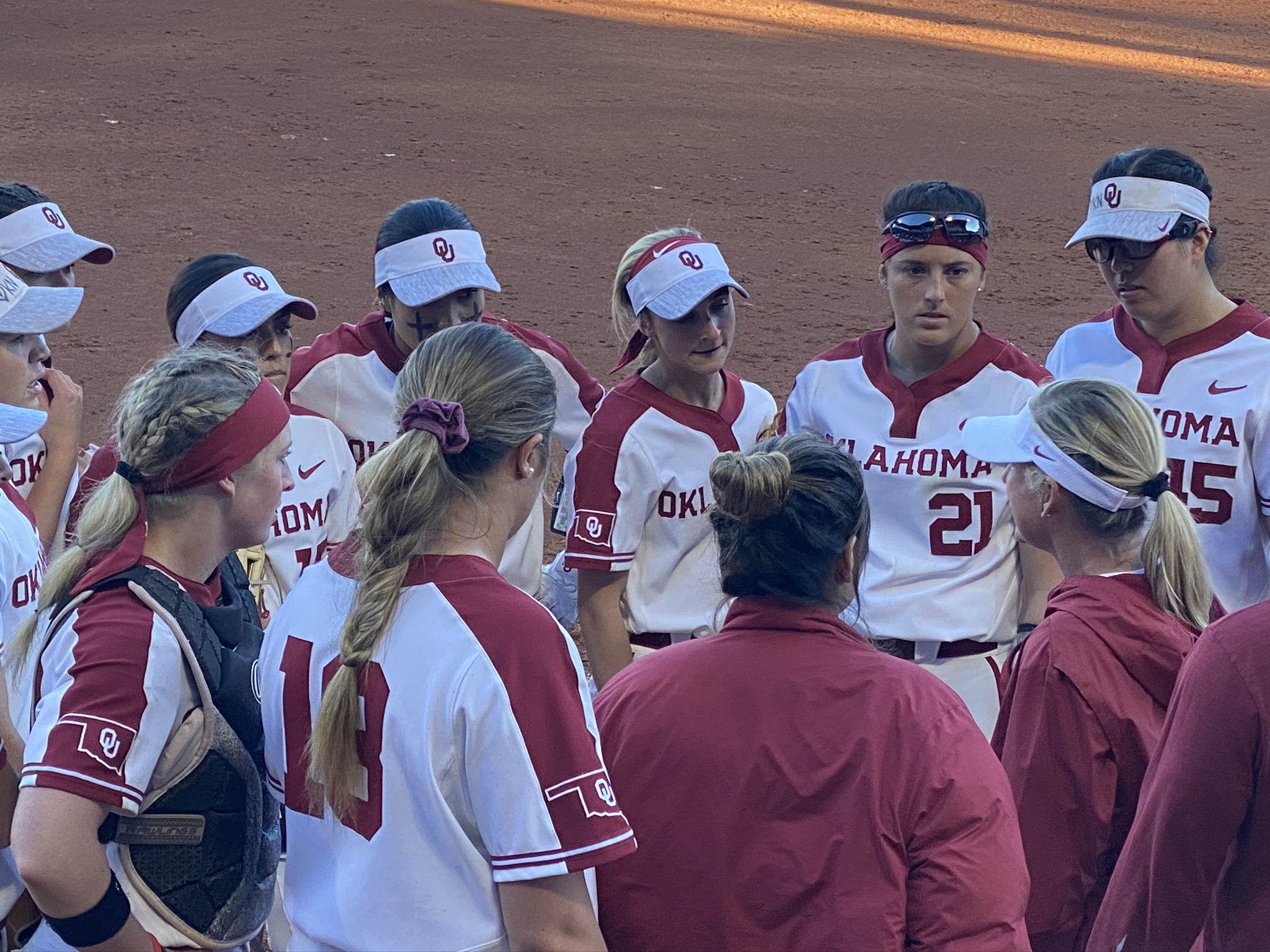 (Tucson, AZ)  The marquee matchup of the early season pitting the #3 Wildcats and the #4 Oklahoma Sooners at the Hillenbrand Classic.

These two teams may meet up again at the Women’s College World Series later on in the Spring.

Power on power, great pitching versus great pitching. Surprisingly, Mariah Lopez who transferred from Oklahoma to the Cats didn’t start against her former team.

Alyssa Denham started the game for the Cats and Oklahoma countered with Macy McAdoo.

Both pitchers had command of their stuff and each team went down in order in the first two innings.

Oklahoma’s  Alycia Flores got the games first hit, a comeback off the glove of Denham that ricocheted to Jessie Harper at shortstop and there was no chance getting her at first. Flores was left on base after a Denham strike out and Harper finished off the inning on a ground ball out. 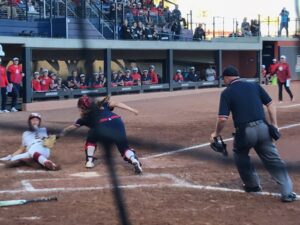 In the top half of the fourth inning, the Sooners strung together three hits and Grace Lyons doubled in the right center field gap to bring home the first run. The trail runner was thrown out at home on a pinpoint throw from left field by Isabella Dayton to end the inning.

Jessie Harper got the Wildcats even at 1-1 with a homer to right field on the bottom of the fourth inning,

Denham got into more trouble in the top of the fourth and with two on and no outs, Taylon Snow hit a check swing single to left to score Eliyah Flores, 2-1 Sooners. Mariah Lopez began warming up in the bullpen for the Cats.

Denham came back strong by striking out the next two batters to end the inning. 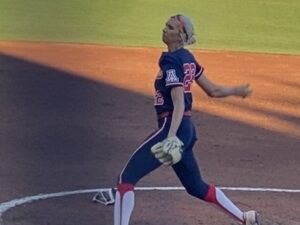 In the home half of the fifth inning, Hannah Bowen led with a walk, but Peanut Martinez hit into a 5-4 fielder’s choice. Bella Dayton hit a sharp grounder to the shortstop who tried to go to second base to get Martinez but the throw sailed into right field and both runners were safe.

With two on and only one out, Janelle Meono tapped a dribbler to the shortstop who went to third to get the lead runner for the second out. Alyssa Palomino-Cardozo singled to right field scoring Dayton to the score at 2-2.

Reyna Carranco followed with a single up the middle and two RBI scoring Meono and Palomino-Cardoza to give Arizona a 4-2 lead.

Three big runs sorted  off an error and timely hitting with runners on base.

In the top of the sixth, Lynnsie Elam took Denham pitch out over the center field wall on a solo homer drawling the Sooners within one run at 4-3.

One final chance for the Sooners In the top of the seventh. Flores led off the inning with a single to right field and the tying run was on base. 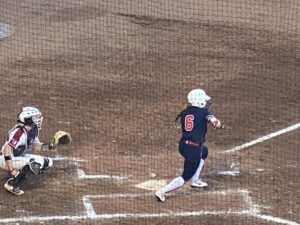 Raylee Pogue doubled in the left center gap but was almost picked off as she overran the bag.

That was all for Denham as Coach Mike Candrea chose to put in Mariah Lopez to shut down her former team. Lopez inherited runners at second and third. Snow hit a soft grounder to Carranco who chose to go home rather than to first and her throw was late as Oklahoma tied it up 4-4. A double play and a pop up to Izzy Pacho ended the top half of the innnig.

Peanut Martinez led off the bottom of the seventh with a hard line drive right to the Oklahoma third baseman for the first out. Dayton  followed by popping up to the first baseman for the second out. Meono finished the inning by grounding out to the shortstop.

Extra innings was in order. Arizona got their four runs off only four hits, while the Sooners had eight off of Denham.

With the international tie-breaker rule in effect, the last out from the previous inning was placed at second base.

The key matchup of the game was Lopez pitching against Grace Lyons, arguably the Sooners best hitter and one of the top hitters in the nation went down on a nasty rise ball to finish off the top of the eighth inning.

In the Cat’s half of the eighth Meono was placed on second base and Palomino-Cardozo was intentionally walked to put the two on base. Carranco bunted in front of the plate, but with the Oklahoma first baseman charging the plate no one covered the bag and everyone was safe loading the bases.

Harper hit into a Fielder’s choice as Meono was erased at home on a bang-bang throw. Malia Martinez hit a hard liner to first base and Harper was doubled off to end the Wildcat threat still tied 4-4.

Lopez struck out the side in the ninth inning as Oklahoma went quietly.

With the bases loaded in the top of the tenth,  Grace Green flies to left but the ball was misplayed and Snow and Donihoo scored to give the Sooners the lead 6-4.

In a questionable call, Dayton laid down a perfect bunt that stayed in front of the plate (which is a fair ball) but was called a foul ball. Candrea came down the third base line and gave the umpire an earfull. Dayton then flied out to left. Cats advanced the runner to third and Palomino-Cardoza came up with two outs representing the trying run, but popped out to the pitcher.