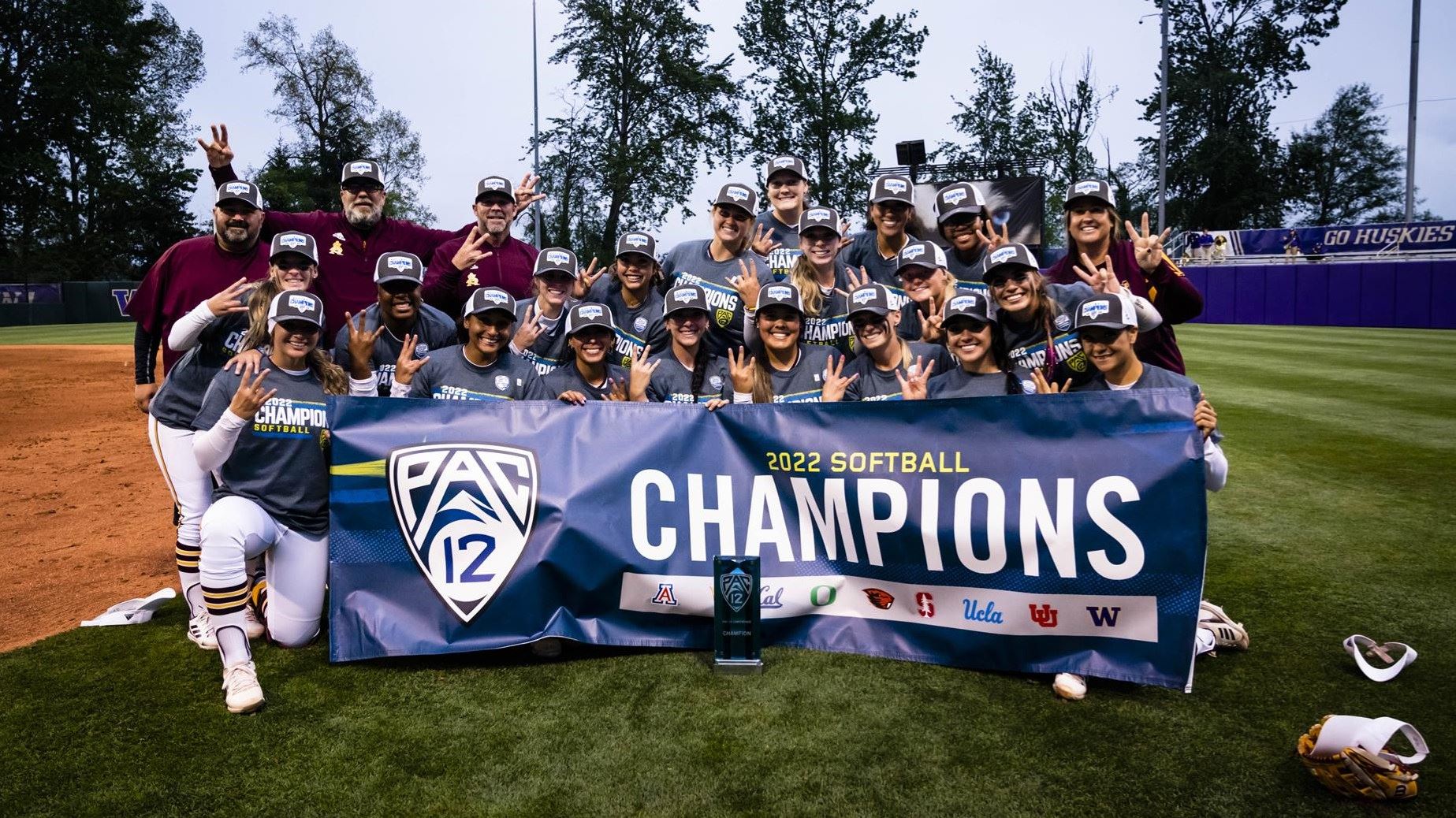 No. 4 Arizona State (38-9, 19-4) evened the series thanks to an impressive game two win, clinching a share of their first Pac-12 Title since 2011. 2022 Pac-12 Coach of the Year Trisha Ford guides the Sun Devils to their program record 19th conference win.

A resilient effort allowed the Maroon & Gold to pull out the victory, reclaiming the lead with an emphatic offensive outburst in the seventh inning. Clutch run-scoring singles by Jessica Puk and Yanni Acuña tied the game and gave the Sun Devils a lead respectively, but it was a devastating three-run blast off the bat of Cydney Sanders that sealed the Pac-12 Championship.

Freshman right-hander Mac Morgan got the start in a big moment, and she delivered 5.2 of effective innings for her team. Lindsay Lopez came in to earn her 12th win of the season in relief, working a 1-2-3 inning to trigger the celebration.

Keen Sun Devil eyes were at work in Seattle this evening, as ASU reached a new season high as it drew 10 walks. This is the first time 10 walks have been drawn by the Sun Devils since last March against Montana.

Junior Alynah Torres continues to be an impact for ASU in the leadoff spot as she got the Sun Devils on the board in the top of the third inning in her 14th home run of the season. UW then scored in their half of the third inning to tie the game, 1-1.

Both teams were scoreless through the fourth and fifth innings, and in the Huskies’ half of the sixth inning they hit a three-run homer to take their first lead of the game. In the top of the seventh, graduate Jessi Puk tied things up with an RBI to bring in Rollin. With two on base, freshman Cydney Sanders hit her 18th home run of the season in a three-run homer to pull ASU ahead 8-4.

This is the first Pac-12 Championship for the program since 2011.

Only the third time they have ever won the conference, also previously winning in 2008.

Arizona State will receive the automatic bid into the NCAA Tournament as the Pac-12’s representative. 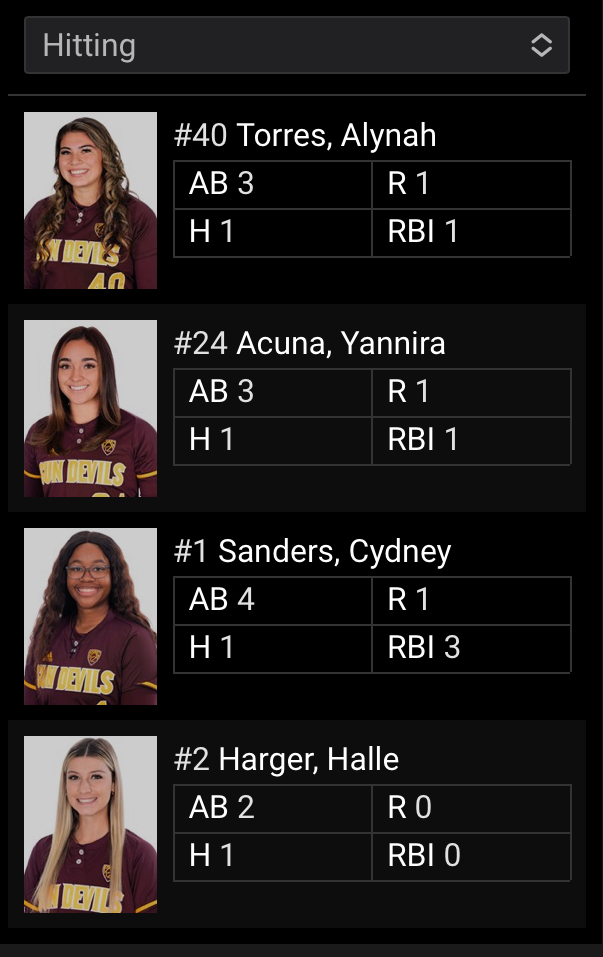 FIRST INNING
The Sun Devils got started right off the bat with leadoff batter Alynah Torres being walked. Cydney Sanders picked up the second early walk of the evening for ASU to bring Torres to second, but both batters were left stranded on a double play.

Mac Morgan got the ball and was ready to compete from the opening pitch. She immediately retired the Huskies’ best hitter Baylee Klingler to open up the inning on a groundout to short. She also set down the next two batters easily, first getting a lazy fly out to right before striking out the following Husky to put up a zero in the first.

SECOND INNING
With two down, Halle Harger singled down the right field line to get on base and reached second after Jessi Puk was hit by a pitch, but both runners were stranded going into the bottom of the second.

In the Huskies’ half of the second frame, they walked their leadoff batter to get on base for the first time of the evening. The Sun Devils then got the next three outs, which included Morgan’s second strikeout of the evening.

THIRD INNING
ASU got on the board off a homer to left field off Torres to give the Sun Devils the 1-0 edge. In the bottom of the third, the Huskies had a home run to right center to tie the game up 1-1, but kept the game tied as ASU got the next three outs.

FOURTH INNING
Arizona State had back-to-back walks for Emily Cazares and Jazmyn Rollin in the top of the fourth to have runners on first and second with no outs. Cazares advanced to third with Rollin advancing to second off a wild pitch. Mailey McLemore came into pinch hit for Puk and she singled to left field to bring in Cazares and Rollin to give ASU the 3-1 lead.

With two outs, Torres was walked to get on base advancing Puk, who came back in as the base runner, to second. Yanni Acuña was hit by a pitch to load the bases for the Sun Devils, but a popup left all three runners stranded going into the bottom of the fourth.

The Huskies got on base off a walk with one out as UW had a second batter reach base off a fielder’s choice, but a groundout kept the Sun Devils ahead going into the fifth.

FIFTH INNING
Rollin walked for the second time of the evening with two outs in the Sun Devils’ half of the frame. Kristiana Watson came into pinch hit for Harger, and she was also walked to bring Rollin to second. Next up to bat was Puk, who was hit by a pitch to load the bases with two outs, but all three runners were left stranded off a foul ball.

Morgan had a quick inning in the circle to keep ASU ahead 3-1 going into the final two innings as she picked up her third strikeout of the evening.

SIXTH INNING
Acuña walked with one away in the top of the sixth and made it to second on a stolen base. With two down, Jaz Hill reached base off a walk, the ninth of the evening for the Sun Devils as Acuña and Hill were left stranded on a strikeout.

Lopez came in in the bottom of the sixth with two outs with the Huskies having runners on second and third after a UW double. The Huskies took the lead off a three-run homer to right center to lead 4-3, as Lopez got out of the inning on a groundout.

SEVENTH INNING
Looking for a push in the top of the seventh, Rollin was walked as the leadoff batter. Fundamentals were excecuted to perfection, as Halle Harger advanced her to second with only one out. Enter Jessica Puk, who came through with a  to center field, which brought in Rollin to tie the game at four. Bella Loomis singled to center field, advancing Puk to home to give the Sun Devils the lead. With Loomis and Acuña on base, Cydney Sanders hit a three-run home run to give ASU the 8-4 lead going into the bottom of the seventh.

Lopez struck out consecutive batters to get two quick outs in the bottom of the seventh and the Huskies had a batter reach first on a hit by pitch, but a pop up to second base gave the Sun Devils the 8-4 win to tie the series.

This is the third conference championship Trisha Ford has won as a head coach in her career, previously taking home the 2015 & 2016 Mountain West Regular Season Championship while at Fresno State.

Arizona State won their 19th conference game, the most in single-season program history. It surpasses the previous total of 18 put up during the Women’s College World Series run in 2008 and again in 2012.

Move to 9-3 in true road games, one of the best winning percentages in the nation away from home.

The Sun Devils have still not lost back-to-back games all season.

Since Pac-12 play began in March, Alynah Torres leads the conference in home runs, now with 12 of 14 coming against some of the nation’s top pitchers.

ASU came into the weekend 4th in the nation in home runs per game with an average of 1.98 per game and matched that with a pair today.

2022 Pac-12 Player of the Year has struggled against Sun Devil pitching, as she went 0-for-4 today and is now 0-for-7 in the series. She has not had consecutive hitless games this season and the last time she was held without a hit in two straight contests was against Oregon in 2021 (4/17-4/18).

The ten walks and 13 total free passes both represent a season high, coming in a crucial game. It is the first time ASU has had ten walks since last March in a game against Montana.

QUOTABLES
Senior utility player Mailey McLemore
On staying ready when being called up as a pitch hitter:

On her approach toward Lynch:

On coming through for the team:

“It was awesome, especially in a tight game like tonight, I love being able to come in and help out.”

On being a senior and playing in a clinching game:

“It’s awesome. No greater feeling, everyone contributed and everyone is excited what we can do.”

On getting the start in such a big moment

“Getting a start like that was truly a great opportunity for me. I was excited but I know I had to keep my calm to know I was going against these tough batters.”

On supporting her teammates and fellow pitchers

“It’s always important to have your teammate’s back when they have yours. If they’re going to work for me, I’m going to work for them. Even when it’s not your opportunity or when your opportunity is over, you always have a role to play for your other staff members because pitching is hard mentally and physically and it takes everybody to win a game.”

On what Pac-12 Championship means for the team

“It means a lot to all of us, we all wanted it so bad and no matter how hard the games are, we all knew we wanted this for each other and ourselves and our coaches.” 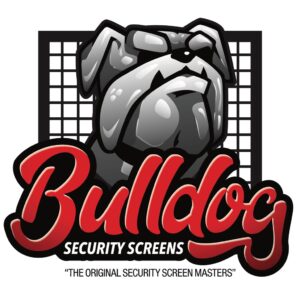