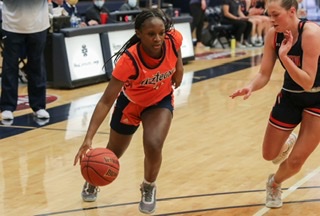 (Tucson, AZ)  The Pima Community College women’s basketball team (14-7, 7-5 in ACCAC) took control in the fourth quarter on Wednesday in its game against Phoenix College (6-12, 2-7).

The No. 13 ranked Aztecs collected an 80-58 victory after outscoring the Bears 27-14 in the final quarter. The Aztecs’ biggest lead of the game was 22 points.

Freshman Angel Addleman (Palo Verde HS) scored 13 of her team-high 17 points in the second half. She scored eight straight points in the fourth quarter. She also had seven rebounds, five assists and two steals.

The Aztecs return to the West Campus Aztec Gymnasium on Saturday when they host Glendale Community College. Tipoff is set for 2:00 p.m.