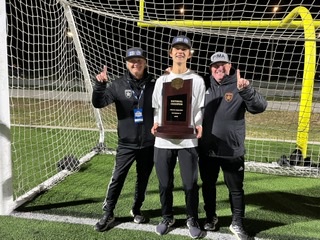 The men’s soccer staff was named the Southwest Region Staff of the Year on Monday.

“As everyone knows, to be successful in anything; life, business or athletics, it always takes great people. No one can do it by themselves,” Cosgrove said. “This award recognizes that it takes a lot of coaches and support staff to be successful.
“Pima College is very lucky to have Paul-David Seldis, Anatole Levallois and Rene Huerta working with our student-athletes.
“This award extends out to our Athletic Administration, our Pima College Administration, our Athletic Trainers and all our Academic Support Staff.”

The Aztecs won their first 14 games of the season and finished 19-1-1 overall. They were runner-up in the NJCAA Region I, Division II Tournament. Pima received the No. 2 seed in the NJCAA Division II National Tournament and went on to beat Muskegon and Southeastern Community College in pool play. The Aztecs beat Georgia Military College in the National Semifinals and advanced to No. 1 Community College of Baltimore County Essex to capture their second NJCAA National Championship winning 2-2 (5-3 in a shootout).

Cosgrove had a new coaching staff this season. His previous staff of Javier Holguin, Alex Rangel and Gabe Mendoza, were part of the 2018 United Soccer Coaches Junior College Division I National Staff of the Year after that team captured the NJCAA Division I National Championship.