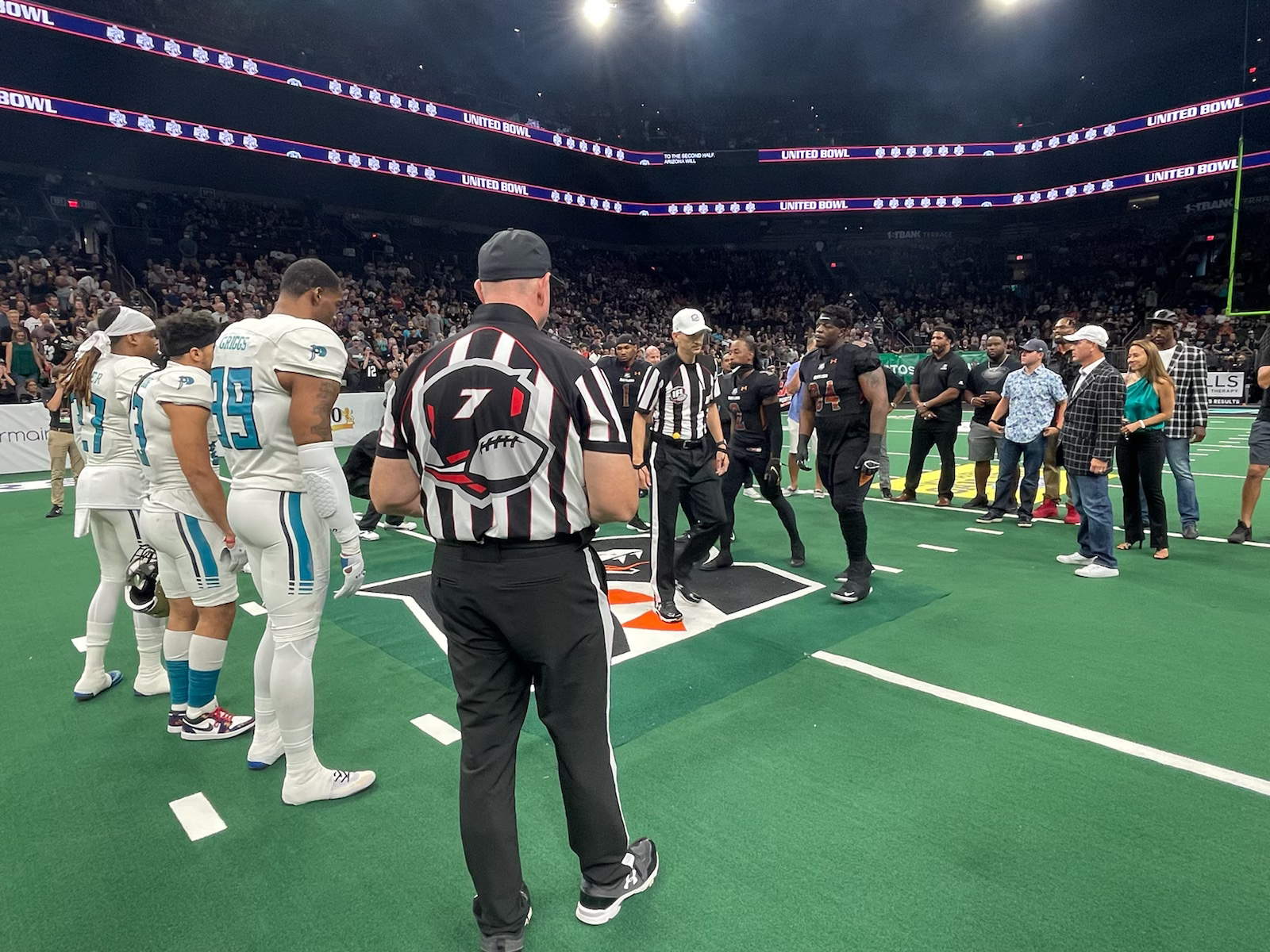 (Phoenix, AZ)  The Snakes came in trying to win their second United Bowl in three tries today against the Massachusetts Pirates at the Footprint Center. Arizona came in with a sixteen game winning streak in the the arena, which has had three different names (Talking Stick Arena, Suns Arena and now the Footprint Center currently) since their last loss June 23rd, 2018. 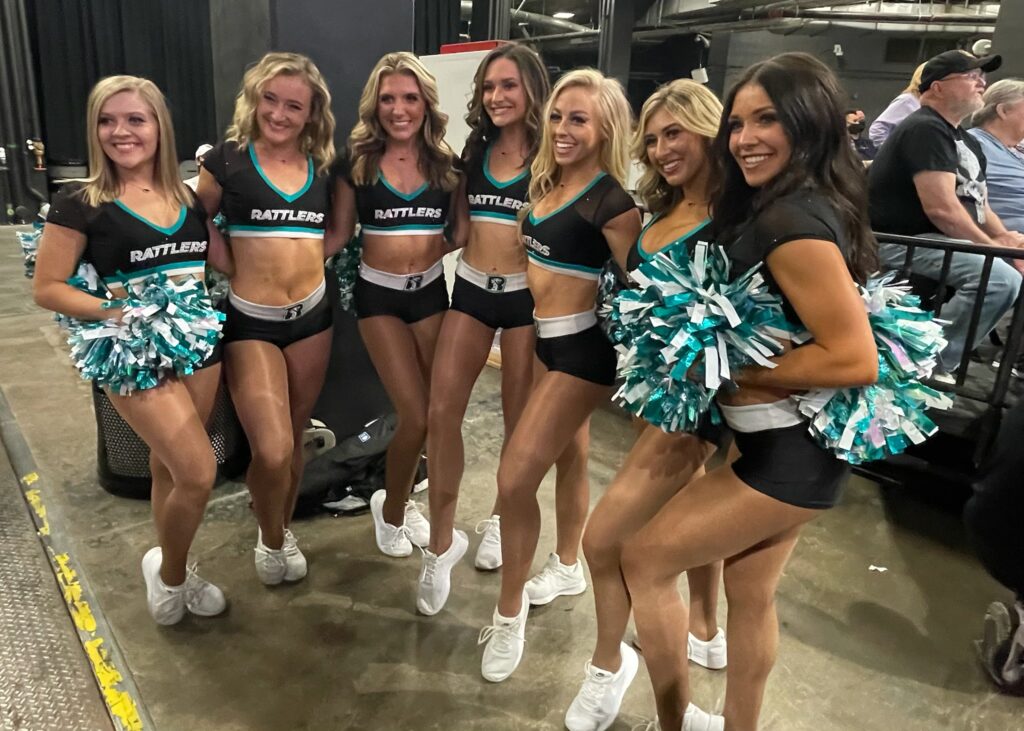 After the pregame pageantry, a moment of silence was given to honor the heroes that lost their lives in the 9-11 attack twenty years ago.

Arizona won the toss and got the ball, driving it down the field on just three plays, but 2021 IFL MVP Drew Powell was intercepted that the goal line with just 1:36 gone off the clock.

With a bit more patience, the Pirates methodically moved the ball down the field and scored from the two yard line on a Justin Stockton run to the front corner of the end zone. Massachusetts up 7-0 at the 7:36 mark of the opening quarter. 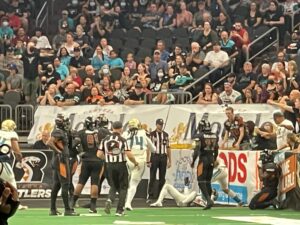 The Ratters started slow as they have in every championship game they’ve played since the United Bowl began in 2017.

Moments later, IFL Defensive Player of the Year Dillion Winfrey picked off a Bennifield pass in the back of the end zone to give the Snakes the ball back. 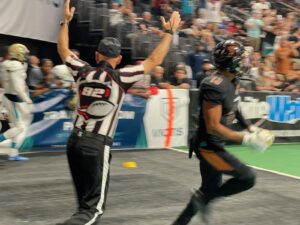 Arizona got on the board on the last play of the final play of the first quarter on a twenty three yard bullet from Powell to Braxton Haley, but the PAT was missed, so the Pirates kept the lead at 7-6 heading into the second quarter.

Dillion Winfrey picked off Bennifield in the end zone, but Powell gave the ball right back to the Pirates on the next play, trying to force it into double coverage around the twelve minute mark.

Pirates got back on the board with 3:48 left till the half with a twenty yard strike to Thomas Owens in the order of the end zone. Massachusetts up 14-6.

A critical fourth and goal from the one yard line saw Powell with a second, third and fourth effort got him into the end zone. The following two point conversion will be talked about for awhile as Powell handed off to Haley on a jet sweep to the left when he stopped, pivoted and threw the ball back to Powell on a razzle-dazzle play that paid dividends and tied the score 14-14.

As the IFL goes, never leave time on the clock as Hartley kicked a thirty yard field goal in the final play of the half to put the Pirates back up 17-14 as both teams headed to the locker room.

Arizona in the first half seemed a step slow and tried to force things often when they weren’t there, hence the two first half interceptions/

Massachusetts subsequently showed they weren’t intimidated by the home crowd or the #1 seeded Snakes.

The Pirates took the second half kickoff and marched down to the Arizona three yard line. On a third down and goal from the six, Bennifield couldn’t find an open receiver, so he kept it up the middle to score and extend Massachusetts’ lead 24-14 with 7:10 left in the third quarter. 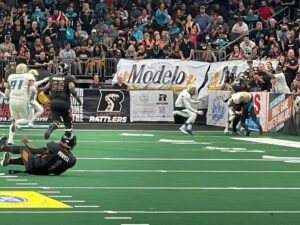 Powell found a wide upon Jamal Miles on a thirsty two yard fly pattern  and struck back in a single play. That brought the Rattlers within three at 24-21 at the 5:39 mark.

The pressure was still on the Snakes defense to make some stops. After the onside kick that the Pirates recovered at the Arizona seven yard line, Justin Stockton seemed to be hemmed up for a loss but evaded four Rattler would be tackles to take it down to the one yard line.

Arizona caught a break with a couple of penalties that took the ball back to the fourteen yard line. Two big defensive plays forced a twenty five yard field goal. More importantly, Arizona kept the deficit under a touchdown 27-21 as the quarter ended.

If you looked at the stats through three quarters, the Rattlers only had seven first downs to Massachusetts thirteen. Time of possession weighed heavily in the favor of the Pirates, 32:26 to 12:34. In spite of the mismatched numbers, Arizona was only down by six points.

Powell sensing a bit of urgency, drove the team down and scored on a four yard keeper, but the Snakes couldn’t stand prosperity as another Lacayo extra point was wide and instead of their first lead of the game, Arizona was in a dog fight tied 27-27 with 8:56 left. 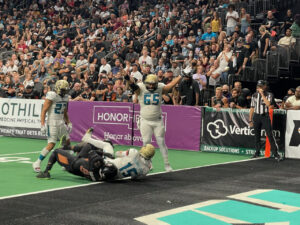 Sensing blood off the missed PAT, Massachusetts took little time to score the go ahead touchdown at the 5:51 mark to keep the pressure on the Rattlers.

Under two minutes left and the Ratters with the ball, Massachusetts defense started pounding Powell on their tackles.

A do or die fourth down play from the Pirates’ twelve yard line with Arizona need a first down or touchdown, went down in flames as a Powell threw it in the end zone with no receiver within ten yards of he pass. 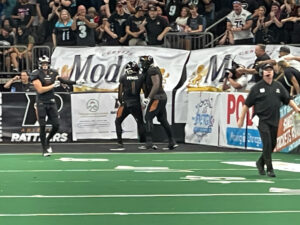 Pirates with the ball and the lead and only :44 left were forced to kick a  thirty six yard field goal with was blocked. Defensive lineman Nikolaus D’Avanzo took the ball down to the Pirate two yard line. Powell did the rest and this time, the PAT was dead center. All tied up at 34-34.

As IFL games go, there was still a chance for Massachusetts to win with :04 left, but a forty two yard field goal attempt wasn’t even close and we went into overtime.

Overtime in the IFL is the same as the NCAA. Ball on the twenty and alternating possessions.

Arizona got the ball first and a defensive holding on a third and goal from the nine yard line, but a fumble by Powell all but did in the Rattlers.

Massachusetts got the ball and just needed a field goal to win which they got from thirty one yard out to take the 2021 United Bowl 37-34. 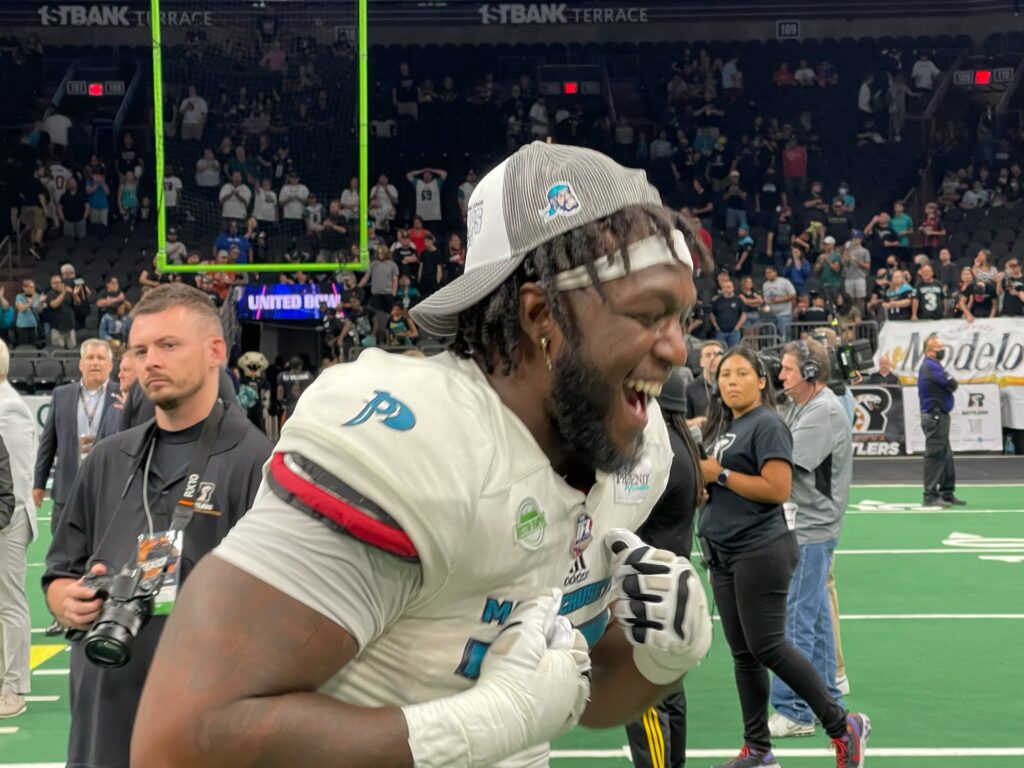 The biggest takeaway is that Powell was self admittedly pressing and tried to take on too much.

The absence of their best offensive weapon Jarrod Harrington out with a leg injury was huge as he and Powell hooked up all season long.

The kicking game was dismal with two extra points and a short field goal missed leaving five points off the board.

Finally, a slow start by Arizona made them chase the Pirates all game long. Only being able to tie the score twice, one of the missed extra points prevented the Snakes from taking the lead 28-27. Little things like that can make a huge impact on a game, especially in a Championship Game.

The sun will rise tomorrow and Arizona will be one of the teams being chased in the IFL, but for now the Massachusetts Pirates have the Championship and bragging rights for the year.