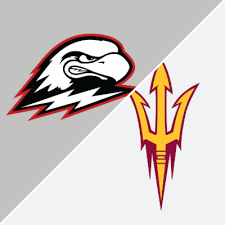 (Tempe, AZ)  College football was back in full swing after a very abbreviated 2020 season due to the Covid Crisis.

Herm Edwards began his fourth campaign with the Sun Devils amidst a cloud of controversy with the NCAA.

None of that mattered tonight as the Devils came in a forty five point favorite over visiting Southern Utah.

The Thunderbirds were hammered in San Jose by the Spartans 45-14 in their season opener last Saturday.

ASU came into the season as a co-favorite by some publications to win the Pac-12 South along with USC.

After getting the ball at the thirty five from the opening kickoff going out of bounds, cornerback DeAndre Pierce intercepted aSouthern Utah’s Justin Miller’s pass at the thirty seven yard line and took it down to the three yard line. The first play from scrimmage, tailbak DeaMonte Trayanum scored the touchdown. The PAT was blocked. Sun Devils 6-0 scoring in the first twenty four seconds into the game, 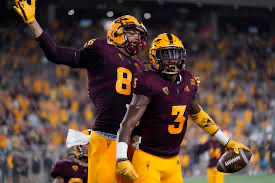 ASU tailback Rachadd White busted off left tackle and scampered twenty six yards and the PAT was successful this time as the Sparky took a quick 13-0 lead not even halfway through the first quarter.

It only took six plays to go seventy six yards in 2:37. So far, the opponent withstanding, the Devils offense looked efficient.

A targeting penalty on defensive lineman Tyler Johnson to the helmet of SUU’s Miller disqualified him for the remainder of the game at the midway point of the opening quarter.

After bing aggressive on defense in the early part of the game, ASU got back to back penalties to keep Thunderbird’s drive alive and SUU found themselves at the Sun Devil ten yard line.

Things continued to go south for ASU as they fumbled the ensuing kickoff and the Thunderbirds got the ball on the Devi’s thirty three yard line.

ASU’s defense immediately redeemed itself with an interception by linebacker Darien Butler.

Now it was the SUU’s turn to shoot themselves in the foot as Daniels gained twenty one yards on a keeper and a personal foul took the ball an extra fifteen yards to the Thunderbirds thirty three yard line.

The drive stalled, but Devil punter Eddie Czaplicki was downed at the one yard line after a forty one yard kick. SUU did nothing and the ball went right back to the Sun Devils. 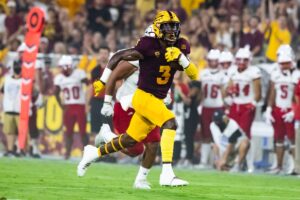 White scored his second touchdown from the one yard line and ASU got the point back off the blocked PAT earlier by converting the two point. ASU 21-7 with 11:09 left till halftime.

The most noticeable thing to this point was that Arizona State can move the ball down the field and score quickly.

The next drive validated that as Daniels drove the team seventy five yards in six plays in 2:35 capped off by a DeaMonte’s twenty yard run up the left sideline for the touchdown. ASU 28-7 with still 5:15 to go until halftime.

The Sun Devil defense stepped up again as SUU was on one of their best drives at the ASU seventeen yard line before Darien Butler picked off Miller’s pass and a Daniel’s kneel down to end the half.

The Devils defense was strong up front as they held Southern Utah forty one yards rushing and a smidge over two yards per carry.

The second half continued to be ASU right away as “Tricky” Ricky Pearsall slashed his way from the twenty six yard line to score, as the Sun Devils again took the ball in under four minutes. ASU 34-7. 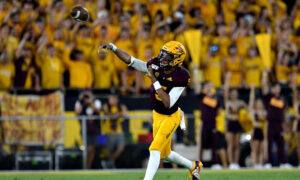 Daniels was injured and had to leave the game around the four minute mark of the third quarter.

Enter 520 Sports Talk 2018 Player of the Year Trenton Bourguet from Marana High School. He’s a red shirt sophomore who worked his way up from walk-on status. 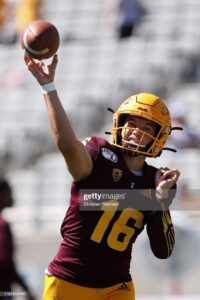 Southern Utah got back on the scoreboard at the 1:22 mark when David Moore III ran twenty one yards after Daniel’s injury. ASU 34-14.

The game seemed to slow down about midway through the third quarter into a lull as the spark on both sides seemed to wain.

With Daniel’s out, Coach Edwards had Bourguet more or less run a controlled offensive sets. This was great experience for the redshirt sophomore as Daniels’ lack of size may be his only negative as the season wears on. How much pounding will he be able to endure over the course of twelve games.

The Devil’s defense kept up the pressure and Southern Utah as last week against SJSU, had no answer. It may be a long season for the Thunderbirds, depending on how stiff their competition will be in the Big Sky Conference.

Bourguet took ASU seven plays for 34 yards with Daniyel Ngata scoring from the nine on a hard rush up the middle. ASU 41-14 with 8:11 to go in the game.

Even with the defensive starters on the bench, ASU appeared to have a lot of depth on that side of the ball.

At this point in the game, all the Sun Devils did was to keep the ball on the ground and let the clock run and why not, all of their points were scored via the rush. The Thunderbirds couldn’t keep ASU from advancing the ball and the chains.

The Devils got to the three yard line, but decided not to score again on the final play of the game. Final Score ASU in an expected route 41-14. 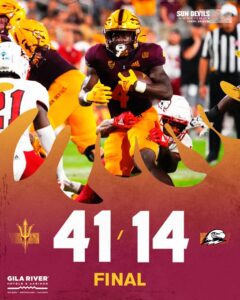 Arizona State gained 222 yards on the ground on 40 attempts for a 5.6 per carry average.

Finishing up a yard short of 200, the passing attack was successful enough to keep Southern Utah off balance. Daniels, Bourguet and Pearsall combined a 14-18 effort that netted 199 yards.

This was a perfect game for the Devils to gain confidence and work their offensive and defensive game plans without many adjustments. Arizona State showed it had balance both offensively and on the defensive side of the ball.

This offense can score quickly and get big chunk of yardage along the way. The defense is aggressive, and at times too aggressive getting penalties for their rough style of play.

Up next is the University of Nevada=Las Vegas on September 11th, who’s preseason ranking by CBS Sports at #123. Subsequently, ASU cones in at #24.