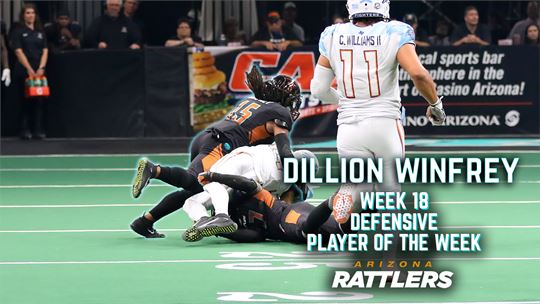 (Phoenix, AZ)  Arizona Rattlers defensive back Dillion Winfrey has been awarded the IFL’s Week-18 Defensive Player of the Week’ honor, for his efforts in Arizona’s 55-38 home victory over the Frisco Fighters on Saturday, August 21.

The standout defensive back finished the regular season as the IFL’s leader in interceptions (11) and passes defended (31).

Winfrey’s ‘Week-18 Defensive Player of the Week’ (DPOW) nod is the second award for him this season and the third DPOW award (2019) of Winfrey’s IFL career.

The game can be viewed on the Indoor Football League’s YouTube channel.