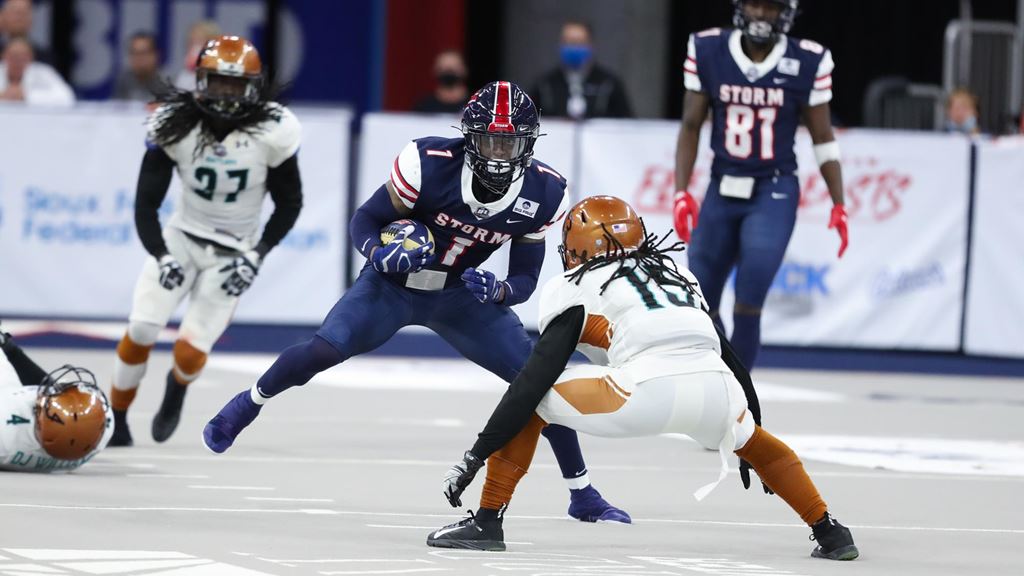 The Arizona Rattlers went with Darrell Monroe as the starting running back against the Storm after a dominant performance by Nick LaSane the previous week, and Monroe delivered. Averaging over five yards per carry, Monroe scored two rushing touchdowns as he punished the defense for 74 rushing yards.

Wide Receiver Jarrod Harrington made his presence felt against the reigning champions, hauling in two touchdown catches and burning the Storm all over the field. Harrington came away with nine catches for 112 yards. Quarterback Drew Powell targeted Harrington on both of his passing touchdowns, in addition to scoring two on the ground. Powell threw for 193 yards, along with a pair of interceptions on the day.

The Rattlers held the Storm’s rushing attack at bay for the majority of the game. The Storm, led by Nate Chavious, ran for four touchdowns last weekend but were held to none by the Rattlers. Quarterback Lorenzo Brown of Sioux Falls did most of the damage through the air as he tossed six touchdown passes. Treyvon Williams came out with the only sack of the day on either side, earning his first of the year. Devin Cockrell led the Rattlers in total tackles with 7.5.

The Storm started the night with a head of steam, as it maintained the lead for most of the first two quarters of the game. The Rattlers took their first lead of the game in the second quarter, when Powell delivered a strike to Harrington in the end zone for the first of his two passing touchdowns on the night. Nate Chavious of the Storm immediately responded by returning the ensuing kickoff for a touchdown to regain the lead. Rattlers Kicker Ernesto Lacayo hit his first field goal of the season as time expired in the first half, allowing Arizona to retake a one-point lead into halftime.

After extending the lead in the third with another Monroe touchdown, the Storm score 13 points that remained unanswered until late in the fourth quarter. Harrington went back to work with a phenomenal one-handed touchdown grab to put the Rattlers up by two in the fourth quarter, before the Storm put the nail in the coffin with two more touchdowns for a twelve-point lead. Powell finished the night by scoring his second rushing touchdown with 10 seconds remaining.

The Rattlers will take on the Green Bay Blizzard after their bye week on Friday, June 4. The Blizzard are coming off a victory against the Tucson Sugar Skulls and currently hold a 3-2 record on the season. The Rattlers are 3-3 in all-time matchups against the Blizzard.