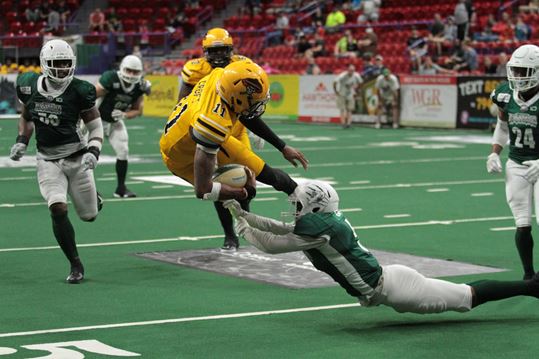 (Green Bay, WI)  The Tucson Sugar Skulls fell short in their season-opening game against the Green Bay Blizzard on Friday night by a score of 42-36.

The Tucson Sugar Skulls utilized a balanced offensive attack to lead most of the game vs. Green Bay. Quarterback Demry Croft scored four total touchdowns on the day, two on the ground and two through the air. Croft led the team in both passing and rushing yards with 160 passing yards and 52 rushing yards.

Kent Shelby II showed out in the season opener, catching five passes for 67 yards and a touchdown. Mike Jones left an impact on the game with his first rushing touchdown of the season to go along with 36 rushing yards and a successful two-point conversion.

Defensively, the Sugar Skulls forced four fumbles on the day, with two being recovered. Cory Butler-Byrd recovered one of those fumbles and forced another. Butler-Byrd added four total tackles to round out his night. Tucson native, Cam Gaddis led the Sugar Skulls in solo tackles with five. Gaddis also added a pass breakup to his total on the day. Altogether, Tucson’s defense held Green Bay to just 106 passing yards and 57 yards rushing on the day.

The Sugar Skulls came out hot, leading the entirety of the first half, before the Blizzard broke through in the third quarter. After Green Bay took it’s first lead of the game, Demry Croft scored his second rushing touchdown of the night and Mike Jones tied the game at 36 with a successful two-point conversion.

Penalties stymied the Sugar Skulls throughout the night. They committed a total of 12 penalties for 91 yards, including a costly fourth down penalty on the the penultimate play of their final drive.

Battle With the Gladiators

Next up, the Sugar Skulls will travel to Albuquerque in their second game of the season, to face the Duke City Gladiators. The game will kick off on Sunday, May 30 at 3:05 p.m. MT in what will be Tucson’s first ever meeting with Duke City.