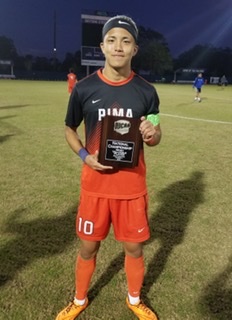 Kametani, a junior forward, is playing for the University of Nebraska Omaha, an NCAA Division I school. The Mavericks play in The Summit League.

Player’s Quote: “Omaha had given an enthusiastic offer to me. I visited Omaha and talked with the coaches, I knew the school had a great program, great staff and great players” Kametani said. “That is what I liked and why I chose to come here for the next step. I am so glad and excited to play for Omaha.”

Kametani had a decorated career with the Aztecs and capped it off by scoring the game-winning goal in double overtime in the 2018 NJCAA Division I National Championship contest. He helped lead the Aztecs to a 45-7-3 record in two years, scoring 39 career goals (program-record 30 goals in 2018) with 12 assists in 54 total games played. He scored seven game-winning goals in his sophomore year.

Player’s Quote: “I’m very thankful to Pima for giving me a great experience and to Omaha for giving me the opportunity to play at one of my goals; an NCAA Division I school. I want to make it the best season ever,” Kametani added.”

Here is a list of Kametani’s individual accomplishments in his Pima career:

ACCAC/Region I Player of the Year

Kametani gets back on the pitch for the Mavericks first game on Saturday, Feb. 13 vs. the University of Denver.