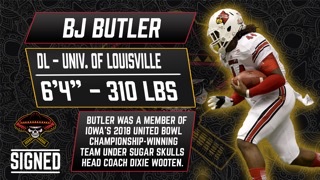 DL BJ Butler (6‘4″, 310, University of Louisville) joins the Sugar Skulls for his fifth season in the IFL. After beginning his career with Billings and Sioux Falls, Butler spent the past three IFL seasons with the Iowa Barnstormers, under current Sugar Skulls Head Coach Dixie Wooten. Butler will be reunited with Coach Wooten, after playing a key role in Iowa’s 2018 United Bowl Championship. Across his IFL career, Butler has totaled 119 tackles, 28.5 tackles-for-loss and 17 pass breakups.

Butler spent his college career at Louisville, where he became an immediate starter on the defensive line as a true freshman. Across a four-year college career, Butler established himself as a two-way player, regularly seeing time at tight end, fullback and all along the defensive line. During his preps career, the Kissimmee, Florida native also previously played quarterback for Osceola High School.