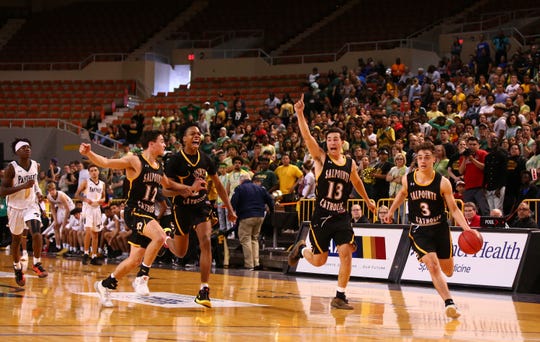 (Phoenix, AZ)  The dog-pile celebration rolled into the scorer’s table, three years worth of emotions spilling over inside Veterans Memorial Coliseum on Saturday afternoon.

They finally did it.

Tucson Salpointe Catholic’s Lancers could let loose after holding off top-seed Peoria 54-48 for the 4A boys basketball state championship, the school’s first in its history.

It capped an incredible three-year run for All-Arizona point guard Evan Nelson, who made up for his eight turnovers with 17 points, including two free throws with 23 seconds left that essentially iced it with a six-point lead.

Peoria (26-4) went 20-2 with Peoria alum Patrick Battillo serving as interim coach for Will Roberts since Dec. 15.

It started strong, forcing turnovers and getting its fast-break rolling, behind point guard Isaac Monroe and big guard Kevin Kogbara.

But after Monroe’s long 3 to close the half gave Peoria a 29-22 lead, Monroe did not score another point. Several of his shots were in-and-out, including his last 3 attempt in overtime.

Freshman guard Andrew Camacho helped bail out Peoria late in regulation, knocking down tough shots. He had 14 points. Kogbara, who had 12 points and seven rebounds, put the game into overtime with his follow shot with five seconds left in regulation.

But Kogbara fouled out with 1:43 to play during Peoria’s scoreless four-minute OT.

Grant Weitman scored on consecutive drives to give Salpointe a 52-48 lead in overtime.

“We were a little stagnant on the offensive end,” Battillo said. “Sometimes, we went away from our team ball. But give it up to Salpointe. They kept attacking. They kept making the right play. We gambled a little bit too much on the defensive end. It gave them good looks from the 3-point line, and they’re an amazing 3-point shooting team.”

Peoria didn’t get to the free-throw line, while Salpointe made 7 of 16 free throws, and outrebounded the Panthers 38-27.

“Late in the game and specifically in overtime, we just missed layups at the rim, looks that went in and out that could have changed the story,” Battillo said. “We got the looks we wanted. But obviously they didn’t fall in.”