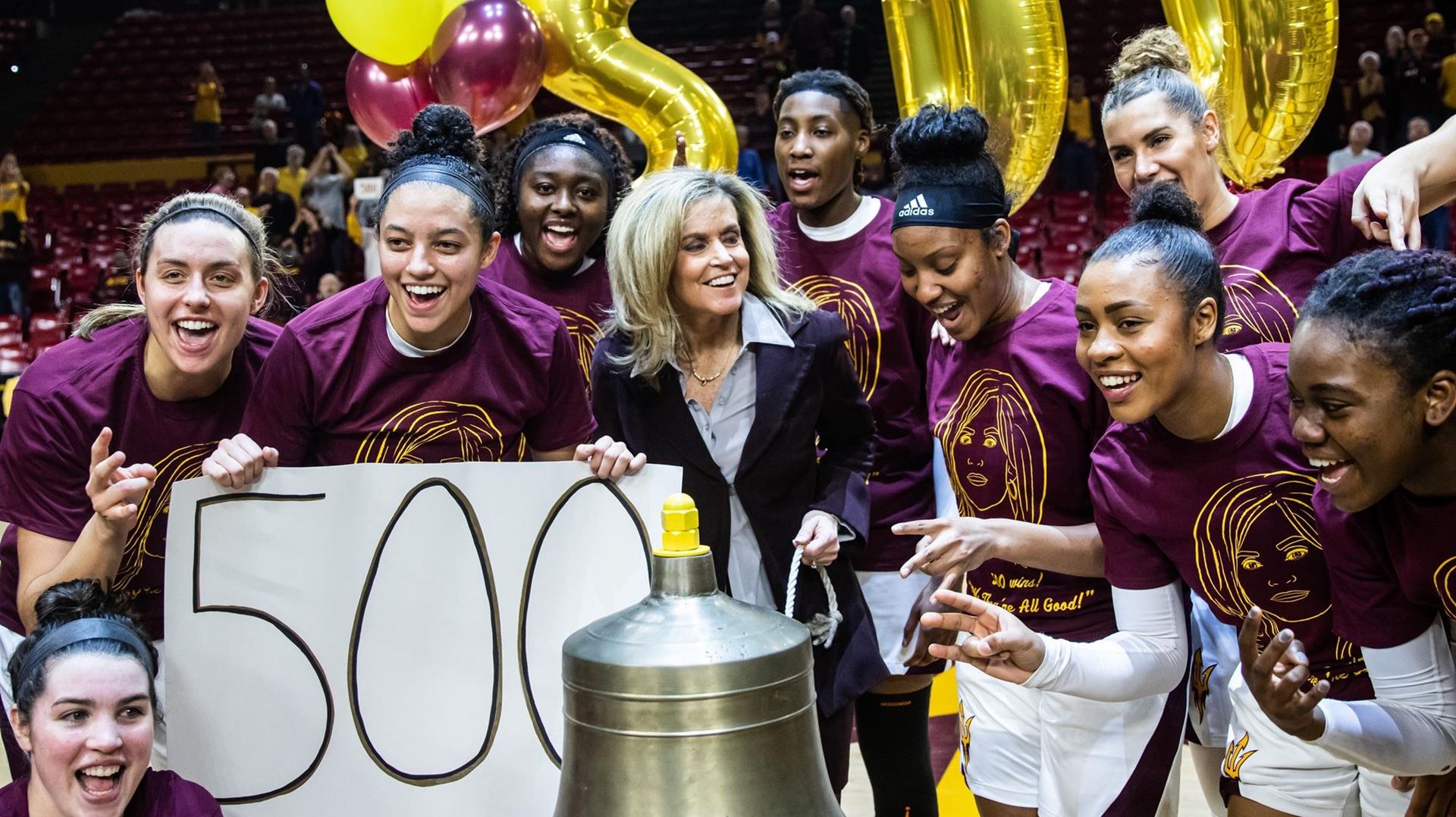 (Tempe, AZ)   Reili Richardson scored 19 of her career-high 24 points in the second half and overtime, including the game-winning 3-pointer, as the No. 19 Arizona State women’s basketball team gave head coach Charli Turner Thorne the 500th win of her career, 76-75 over USC in the first triple overtime game in program history.

The Trojans, who were led by Endyia Rogers’ 30 points, trailed by as many as 12 points in the first half and outscored the Sun Devils 31-23 in the second half to overcome an eight-point halftime deficit and send the game to overtime.

ASU had the largest lead of either team in the three overtime periods (four points) with the last of the three occasions coming after Richardson’s 3-point play gave the Sun Devils a 68-64 lead with 90 seconds left in the second overtime. Rogers followed with a 3-pointer and then – after Richardson hit 1-of-2 free throws – USC’s Kayla Overbeck tied the score at 69-69 in the final seconds of the second overtime.

The Sun Devils were tied or trailing for most of the third overtime. USC took a two-point lead three times in the final five-minute frame. Overbeck’s layup gave USC a 75-73 lead with 1:19 left. After an exchange of possessions the Sun Devils called timeout with 25 seconds remaining. Ryan drove to the basket in an attempt to tie the game but her contested shot would not fall. She was able to get her own rebound and – with seconds left on the clock – passed back out to Jamie Ruden who quickly spotted Richardson for the wide open triple which the senior guard knocked down to give the Sun Devils the win.

For Turner Thorne, who won 40 games in three seasons at Northern Arizona before coming to Tempe, the victory was her 460thas ASU’s head coach.

Both teams scored four points apiece over the first four minutes of the second quarter before an 11-3 scoring burst by the Sun Devils helped them take their largest lead of the game, 28-16, with just over two minutes left in the first half. Five different Sun Devils – Richardson (jumper), Bejedi (3-pointer), Ja’Tavia Tapley (layup), Russell (layup), Walker (layup) – teamed up to score the 11 points. The Trojans would score the last four points of the half to cut ASU’s lead to eight, 28-20 at the half.

The Sun Devils shot 48 percent in the first half while allowing USC to make only 36 percent of its attempts. Both teams combined for 29 turnovers (USC 16, ASU 13).

After outscoring the Sun Devils 16-12 in the third quarter, the Trojans cut their halftime deficit in half and trailed by only four points, 40-36 entering the final quarter.

After Richardson opened the fourth quarter with a layup to give the Sun Devils a six point lead, the Trojans responded by scoring seven straight points to take their first lead since the opening quarter, 43-42.

After Bejedi responded with a layup to return the lead back to ASU, both teams hit a wall offensively with neither team able to score for nearly four minutes. Tapley broke the drought with a layup to put ASU back up 46-43. The Trojans came back with the next six points of the game to take a 49-46 lead with just under two minutes left. Richardson would personally account for the next five points to help ASU go up 51-49 with 46 seconds left. Rogers came back with a jumper to tie the game at 51-51 and send the game to overtime.

The Sun Devils return to action on Sunday (noon MST) when they host No. 8 UCLA at Desert Financial Arena.