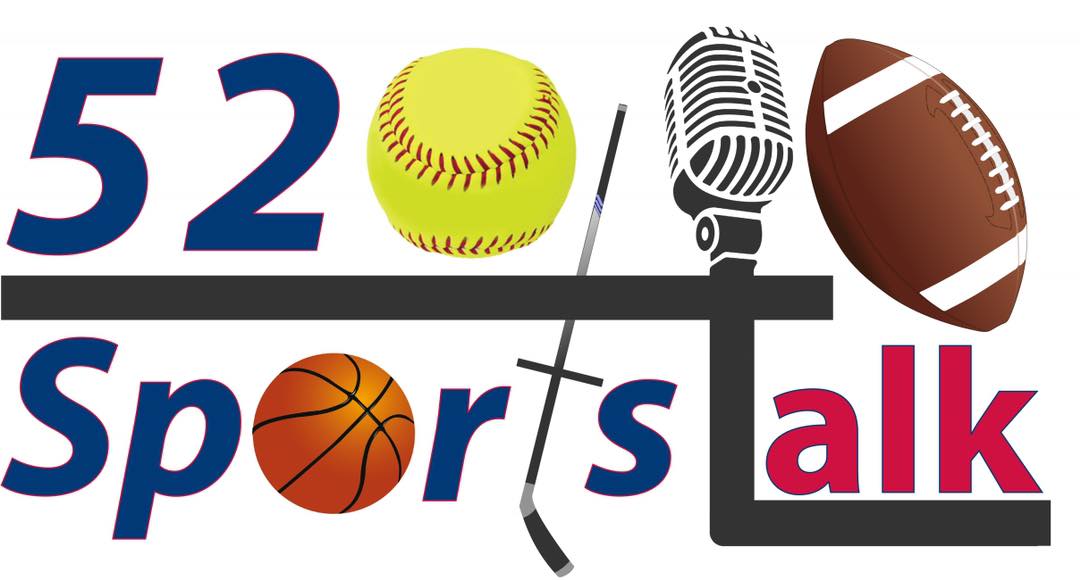 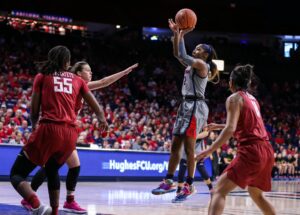 Coming off a road split with the Oregon schools, Arizona returned home to take on Washington and Washington State.

Friday night brought the Dogs to McKale where the Cats were waiting to rumble.  Washington, coming off of a solid win against Colorado, was looking to take down the #12 team in the country . Unfortunately for the Huskies, there was too much Arizona love in the air and the Wildcats were ready to play. Behind stiff defense, 4 players scoring in double figures and shooting 49% – 50% from three, the Wildcats took the win and increased their record to 20-4. Aari McDonald scored 19 points, Cate Reese had 13 points, and Amari Carter added 10 points. Freshman guard Helena Pueyo came off the bench, giving the Wildcats an offensive spark, adding 14 points hitting 4-6 beyond the arc. Sam Thomas came alive on defense and had 6 blocks (only the 7th player in program history to accomplish this) and 4 steals. Final score: Arizona 64 Washington 53.

Sunday the wildcats faced the Cougars of Washington State. Arizona led the whole game taking a 10 point lead early in the first quarter and never looked back. Sam Thomas and Aari McDonald combined for 39 of the Wildcat’s 72 points. McDonald had 21 points on 9-14 shooting. She also had 6 rebounds, 4 assists and 2 steals. Thomas scored 18 points on 6-10 shooting and had 6 assists along with 4 steals.

Next up for the Wildcats:

Tee Tee Starks was invited to participate in the 2020 So You Want To Be A Coach program. This program is put on by the WBCA and is held during the Final Four in New Orleans from April 2-4. Tee Tee is the third Arizona women’s basketball player in the last three years to be invited. The other two are Kat Wright and Destiny Graham.

Arizona swept the L.A. schools for the first time in 15 years

By beating Oregon State, Arizona beat a top 10 team for the first time in program history

Aari McDonald keeps getting national attention and it is well deserved.

Cate Reese is making her mark on the national scene as well. Cate was just named one of the 10 finalists for the Katrina McClain Award. 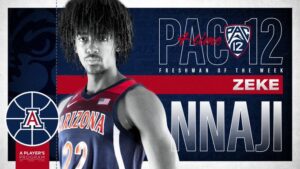 The Wildcats hit the road to take on the Bay area schools looking to get their second road sweep of the year after a huge loss at home to UCLA that took them out of the top 25.

Heading into the Cal game on Thursday night, the Wildcats were needing a win. Not just for tournament seeding purposes, but team moral. UCLA had just dominated them in McKale and that doesn’t happen often. The team responded. Arizona, despite getting out rebounded 37-32, and looking a bit out of sorts for most of the game (a possible roll over from the loss to UCLA) was able to leave Cal with the win. The game saw the return of the 3 for Dylan Smith, a solid 7 assist night for Nico Mannion and Zeke Nnaji contributed 21 points.

Arizona arrived at Stanford looking to get their second Pac-12 road sweep. While the Cardinal’s Oscar de Silva sat out Thursday’s game against the Sun Devils after suffering a scary head injury that required stitches in a game the week before against Colorado, he was suited up and ready to play on Saturday night. De Silva played limited minutes, but still had a productive night with 15 points. Zeke Nnaji had his second straight 21 point game and Josh Green broke out of a mini slump adding 15 point to help lead the Wildcat’s to a victory. Arizona is the only team in the conference to record two road sweeps this season.

Next up for Arizona:

Zeke Nnaji is named Pac-12 Freshman of the week for the fourth time.

Arizona makes it back into the top 25 landing at 24 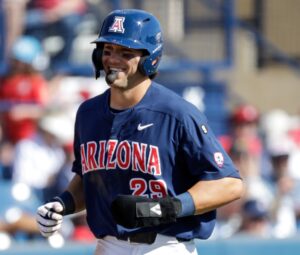 Behind strong pitching and hot bats, the Wildcats dominated all three games against the Great Danes sweeping the weekend series. Here is a quick look at each game:

While the players may have slept overnight, the Arizona bats did not. The Wildcats continued their offensive dominance over the Great Danes with 13 hits, seven for extra bases. Albany’s pitchers struggled giving up 11 walks. With Quinn Flanagan and right hand reliever Wesley Scott allowing just two hits and striking out thirteen batters, Arizona blanked Albany to improve to 2-0 on the season.

The Wildcats extended their nation leading winning streak to 13 with their win and series sweep over the Great Danes. Freshman Chandler Murphy threw 5 shut out innings striking out seven batters and only allowing three hits. Arizona’s bats, once again, were hot. Five batters had multiple hits. Kyson Donahue went 3 for 3 with four runs scored and two walks. Donta Williams and Austin Wells combined for 4 for 7 with seven RBI’s and three walks.

Next up for the Bat Cats:

The Hillenbrand Invitational was held at Rita Hillenbrand Memorial Stadium February 14-16. The Wildcats, ranked #4 in the country, faced off against Long Beach State, Northern Iowa, Bryant and #2 Oklahoma. Arizona went 4-1 on the weekend with their only loss coming in 10 innings against Oklahoma.

On Friday the Lady Bat Cats started the Invitational playing Long Beach State winning a tight pitching dual 2-1. Mariah Lopez allowed only one run on six hits with six strikeouts and no walks. The offense couldn’t get their bats warmed up, but managed to get just enough from Alyssa Palomino-Cardoza, Jessie Harper and Malia Martinez to get the W. The Wildcats stranded nine runners. In game number 2, Arizona took on Northern Iowa and the bats finally started to connect. The Cats came from behind to take Northern Iowa into extra innings and won in walk off fashion on a dropped fly ball hit by Isabella Dayton with bases loaded. Final score 7-6 Wildcats.

Arizona split Saturdays games beating Bryant 3-1 and dropping a hard fought extra inning nail biter to #2 Oklahoma 4-6. In Arizona’s win over Bryant, Mariah Lopez struck out 13 batters which tied her season high. Lopez did not allow one walk and only gave us one run on three hits. With eight different Wildcats getting hits including multiple hits from Sharlize Palacios and Jenna Kean, Arizona plated just enough to grab the win. Game number 2, was exactly what you would expect from two top 5 teams. Great pitching, some good hits and a few early season jitters. Arizona lead 4-3 going into the 7th inning. After Oklahoma hit a single and double off of pitcher Alyssa Denham putting runners on 2nd and 3rd with no one out, Denham was pulled in favor of Oklahoma transfer Mariah Lopez. Facing her former team, Lopez was able to get out of the inning with just one run crossing the plate. The Wildcats couldn’t put it away in the bottom of the 7th, so the teams headed into extra innings. In the 10th inning Oklahoma had bases loaded when Grace Green hit a fly ball to left field which was dropped bringing 2 runs in. Arizona couldn’t respond and the Sooners took the win.

Next up for the Lady Bat Cats: 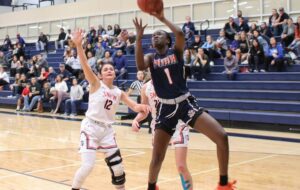 The Lady Aztecs beat South Mountain Community College in blow out fashion. Haile Gleason scored 21 points off the bench, adding 6 rebounds and 3 assists. Pima, trying to catch Mesa Community College for the number 1 seed in the ACCAC Division ll standings, are on a 4 game winning streak.

Next up for the Aztecs: 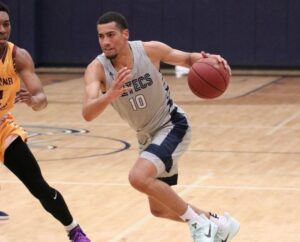 Make that 6 in a row! The Pima Men’s Basketball team in turning it on at the right time defeating South Mountain Community College 102-85 on Saturday. The Aztecs were lead by Jake Lieppert, Rashad Smith and Cole Gerken who combined for 82 points. The Aztecs are still in the hunt for the 2 seed in the ACCAC Division ll standings.

Next up for Pima: 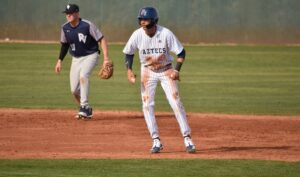 It was a matchup of 12 vs 13 as the #12 Pima Aztecs faced #13 Arizona Western College in a double header on February 15th. Behind Ochoa’s 6 RBIs the Aztecs defeated the Arizona Western 7-6 in the first game and 15-12 in game two. Pima is now 13-0 on the season and will head to South Mountain Community College for a double header.

Next up for Pima Baseball: 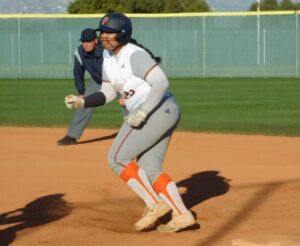 The Pima Ladies went on the road to face Mesa Community College on Saturday. Mesa swept a struggling Aztec team. While the Aztecs hit well enough to get on base, they stranded 13 runners between the two games.

Next up for Pima Softball: 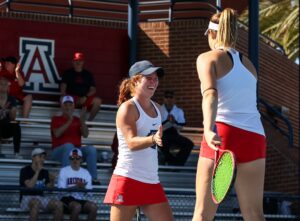 Arizona took care of business on Saturday defeating New Mexico State and Santa Clara 6-1 in both matches. Abby Amos and Gitte Heynemans won all four of their matches to lead the Wildcats to victory.

Next up for the women:

The Blue Gray Classic in Alabama 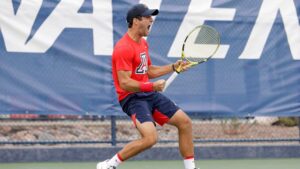 Next up for the men:

The Blue Gray Classic in Alabama 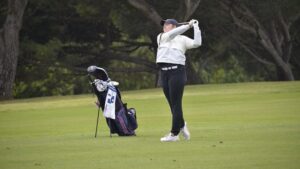 Next up for the Lady Cats: 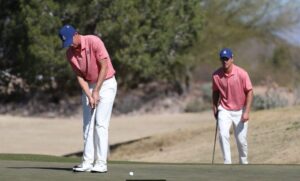 Arizona is currently ranked #3 in the country.

Next up for the Men 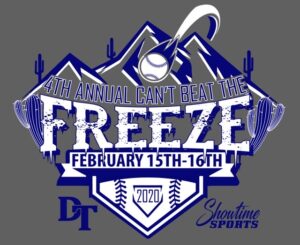 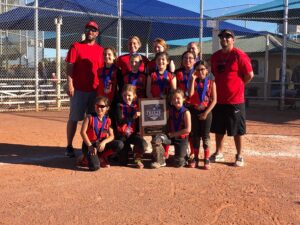 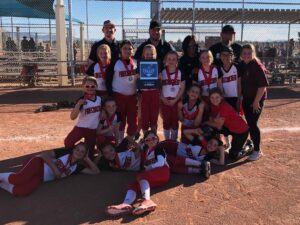 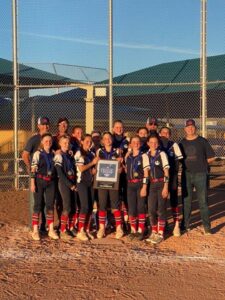 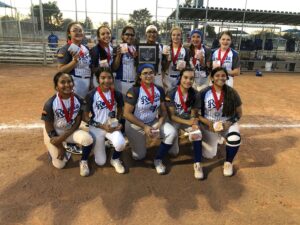 Please let us know of any other results from this tournament.

If you have sporting news that you would like to see featured in our Around The 520 Weekly Wrap Up, please send it to us at AroundThe520@gmail.com. We love to highlight our Southern Arizona teams and their successes.