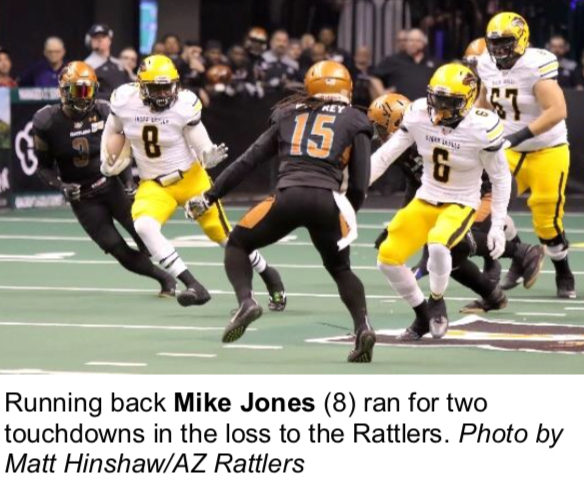 (Tucson, AZ)  Coming off their first franchise loss to its in-state rival the Arizona Rattlers, the Tucson Sugar Skulls will look to get back in the win column in a rematch with the San Diego Strike Force. The two teams met in what was the Sugar Skulls’ franchise opener, a 65-44 victory in San Diego on March 3.

The Sugar Skulls are coming of a bye. Turnovers and special teams doomed them in a March 16 loss to the Rattlers in Phoenix.

The Sugar Skulls were held to 28 points after topping the 60-point mark in their first two games. They lost two fumbles and had a field goal blocked in the end zone for a touchdown by the Rattlers.

Running back Mike Jones (8) ran for two touchdowns in the loss to the Rattlers.

“The one thing that we can’t do against a team like that is make mental mistakes, which we did. And you can’t turn the ball over, which we did,” said Head Coach Marcus Coleman.

This week, the Sugar Skulls will be up against the IFL leader in passing yards per game in Strike Force QB Derrick Bernard, who is averaging 200 yards through four games. However, the Strike Force defense is allowing a league-high 62 points a game, and they are winless in four games.

The Sugar Skulls enter the game with the league’s second-ranked offense with a rushing attack that is also second in the league behind the running back duo of Mike Jones and Shad Thornton, who have combined for 197 yards in the three games, and Matt Behrendt who has rushed for a team-leading 149 yards.

Defensively, the Sugar Skulls rank third in the league in total defense behind the league’s leading tackler, Zach Allan, who is averaging 10.7 tackles per game.

With four rushing touchdowns and a TD receiving, running back Mike Jones is tied with Curenton for the team lead in touchdowns scored.

The quarterbacks, Behrendt and Jake Medlock, have yet to throw an interception in 71 pass attempts. Behrendt has started all three games, while Medlock has played the entire second half of two games.

Six different receivers have caught passes, and three, Curenton, Brandon Sampson and Donovan Rasberry, are over the 100- yard mark in receiving yards.