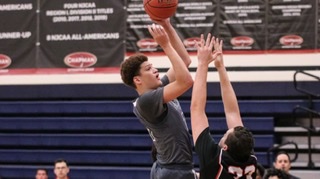 Jackson, a freshman forward from Anchorage, AK, was named NJCAA Division II National Player of the Week on Tuesday for Dec. 13-Jan. 3. This is the first time a Pima men’s basketball player has earned this honor since Deion James (Empire HS) during the 2016-17 season.

The Aztecs return to the West Campus Aztec Gymnasium on Wednesday, January 12 when they host Cochise College. Tipoff is set for 7:30 p.m.