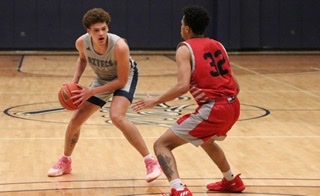 The No. 9 ranked Aztecs fell 84-83 to the Gila Monsters in Thatcher.

The Aztecs led 69-62 with about seven and half minutes left but the Gila Monsters went on a 12-4 run in three minutes to put Pima down 74-73 with 4:20 left. The Aztecs bounced back with two baskets from freshman Traivar Jackson and sophomore Chrishon Dixon as Pima reclaimed the lead at 77-74.

With the score tied at 79-79, Jackson scored on back-to-back possessions to keep the Aztecs ahead by two points at 83-81. The Gila Monsters were called for an offense foul with 53.5 seconds left but the Aztecs turned the ball over on the next possession.

The Gila Monsters hit a three-pointer with 17.2 seconds remaining. Coming out of a timeout with 7.3 second left, Jackson threw the ball out of bounds. Eastern Arizona was fouled but couldn’t convert on the free throw with 4.0 second left. Jackson got the defensive rebound and passed the ball to freshman Quincey Trammell but he was called for traveling.

The Aztecs took a 26-15 lead mid-way through the first half but they trailed 39-37 at halftime. Pima fell behind 46-41 in the opening minutes of the second half but retook the lead after a 21-8 run in six minutes to make it 62-54. The game featured five ties and six lead changes.

Jackson finished with a game-high 32 points on 13 for 18 shooting. He also had 12 rebounds and three assists. He scored 20 points in the second half.

Sophomore Daniel Moody (Walden Grove HS) also had a double-double as he finished with 13 points and 11 rebounds. Trammell scored all 13 of his points in the second half. He went 6 for 7 from the field.

Dixon went 5 for 9 from the field with 11 points to go along with five rebounds and six assists. Freshman Itury Kitt (Eastpointe HS) also added 11 points.

The Aztecs will hit the road once again on Wednesday when they play at Arizona Western College. Game time is set for 7:30 p.m.