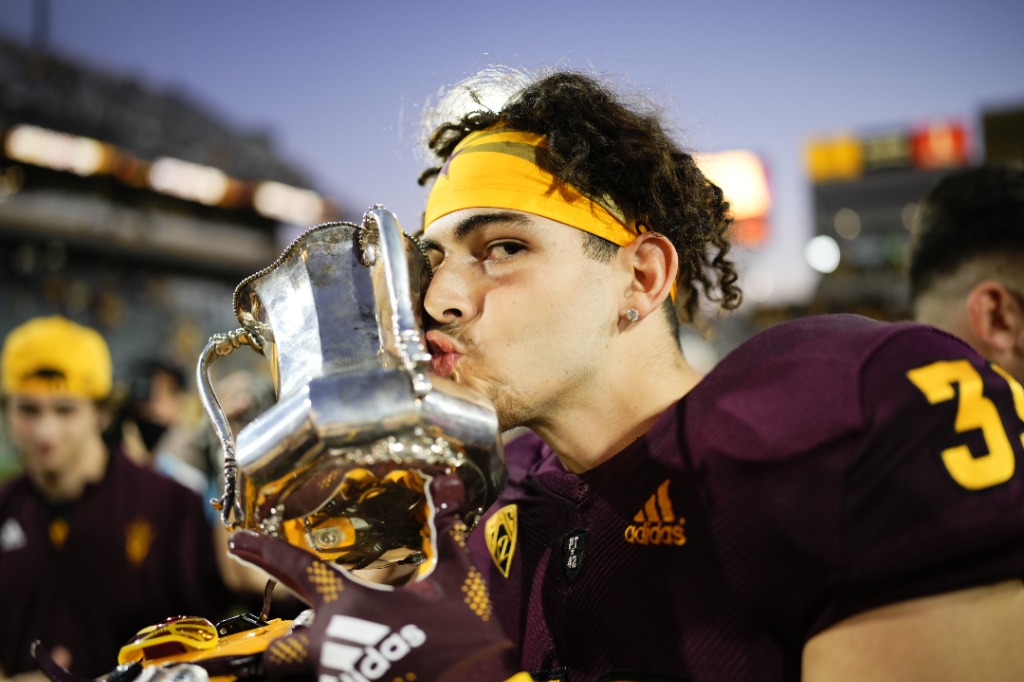 (Tempe, AZ)  Today, both teams came in on different paths. For the University of Arizona, this is their Bowl Game having a 1-10 record playing their final game of the season.

The Sun Devils came in 7-4 with the possibly of upgrading their Bowl status. Many media types have the ASU going to Petco Park in San Diego for the Holiday Bowl. With a win, that may be changed to the Las Vegas Bowl in the NFL Raiders Allegiant Stadium.

ASU had a four game wining streak over the U of A and a 70-7 shellacking down in Tucson last year.

There is no love loss for either team, so the intensity far exceeds other regular season games.

The game is played for the oldest trophy between two universities, the Territorial Cup which began in 1899.

Arizona Head Coach Jed Fisch got his first taste of the rivalry and speculation that Devils Coach Hern Edwards may have coached his last.

The Wildcats got poor field position at their own four yard line after a crazy bounce on the opening kickoff.

Right off the rip, they lined up in an unorthodox set and completed a forty four yard pass to Dorian Singer and Arizona was in business at the Devils’ twenty four yard line.

ASU’s defense stiffened and the Cats’ Tyler Loop kicked a thirty two yard field goal and Arizona did what it set out to do scoring first. Arizona 3-0 at the 10:37 mark of the opening quarter. 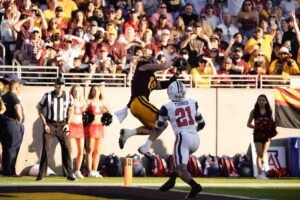 Arizona State’s first possession moved the ball efficiently down the field and scored on a Jayden Daniels pass to “Tricky” Ricky Pearsall from fourteen yards out to put the Sun Devils on top 7-3 at the 6:41 mark.

Wildcat’s quarterback Will Plummer came right back with some more razzle-dazzle to Singer again and got his team back in the red zone.

A motion penalty on Arizona took the ball front the Sun Devil’s one yard line back to the six and once again ASU held. The first play of the second quarter, Loop hit his second field goal from twenty six yards to bring the score 7-6.

Arizona moved the ball well in the opening  quarter, but both drives stalled inside the five yard line when they were forced to play straight up football. Their trickery got them down the field once again, but you can’t rely on those types of plays to win a football game. 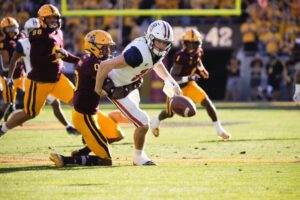 Disaster struck the U of A when under pressure, Plummer fumbled the ball and the Devils Tyler Johnson recovered on the Wildcats one yard line.

A play later Rachaad White banged into the end zone. Arizona State up 14-6 at the 12:12 mark of the second quarter.

ASU finished their drives for touchdowns compared to settling  for field goals for Arizona.

Once again, the Cats moved the ball well in the middle of the field, but the drive stalled again on an incomplete pass.

Loop once again hit the field goal from thirty two yards out. Devils still led 14-9 with 2:19 left till halftime.

ASU went into the locker room fortunate to have the turnover on Plummer or this game would have been 9-7 Wildcats.

The vaunted Sun Devil defense held the U of A to 1 yard rushing but Plummer threw for 215 yards. Pass only teams have difficulty wining games.

ASU was run heavy at 80 yards on the ground and only 48 yards passing.

The Wildcats had an unsportsmanlike conduct penalty after time expired in the first half. The penalty was assessed on the kickoff.

Arizona State made quick work of the Wildcat miscue. On the fourth play of the third quarter, Daniels ran around the left end and up the sidelines for a forty eight yard touchdown to widen the lead 21-9 and 13:07 left in the third quarter.

Arizona finished their first second half drive in the end zone at the 9:35 mark when Plummer hit Michael Wiley from the five as he stretched the ball over the pylon. ASU 21-15 as the Wildcats’ attempt for a two point conversion failed. 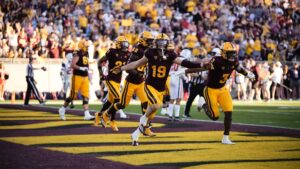 ASU continued to run the ball to keep the clock rolling and to tire the Cat’s defense. Then Daniels threw a corner fade route in the end zone to Pearsall and the lead was back in double digits 29- 15 with the Devils successful on their two point conversion. Ten plays 78 yards in 4;38 but more importantly ASU showed it could control the ball offensively.

Arizona shot itself in the foot with a holding call in the end zone on a punt, which resulted in a safety and the Devils got the ball back with a 31-15 lead at the end of the third quarter.

The U of A continued to have success on the Plummer to Berryhill pass-catch combination, but then Plummer made a huge mistake and Jack Jones got an eighty seven yard pick six to put the nail in the coffin of the Wildcats. 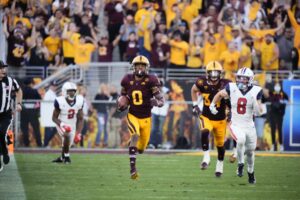 A big reason their record was 1-10 is the fundamental errors in judgement that have plagued this team all year. ASU 38-15 with 9:49 left in the game.

The Wildcats in hurry up mode had to convert a fourth down on a drive that fizzled moments later as Arizona State took over on downs at their own twelve yard line.

ASU just ran out the clock and got their fifth consecutive win over the U of A and the Territorial Cup will stay in Tempe for yet another year.

The main takeaway from the game was although the Wildcats won almost every statistical battle, they only scored one touchdown.

With their big play trickery they moved the ball at will between the twenty yard lines. When presented with a short field they were forced to play normal football and they failed miserably. They had virtually no run game, only gaining 50 yards on 34 carries.

ASU’s game plan was to ground and pound. This was evident with their 228 yards rushing to only 86 yards through the air. You can be one  dimensional when you have a established ground game. 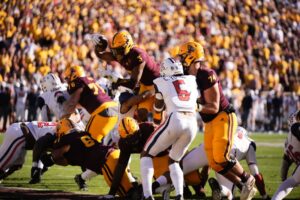 The Devils’ defense forced Arizona into a pass only team. It’s like the difference of shooting layups (rushing) to shooting three pointers (passing).

Daniels and White combined rushed for 193 yards on 31 carries for a 6.2 yard average. Ricky Pearsall’s 52 yards on 6 catches doesn’t stand out on paper, but the timing of his receptions and a key touchdown softened up the Wildcat defense kept Arizona on its heels all game.

Coach Jed Fisch felt the sting of losing to his in-state rival for the first time. With the game in Tucson next season, the Wildcats have over 360 days to think that three coaches ago was their last victory over the Sun Devils.

Up next, the Bowl Selection Show will determine where the Devils (8-4) will play, San Diego’s Holiday Bowl or up the road in Allegiant Stadium in the Las Vegas Bowl. 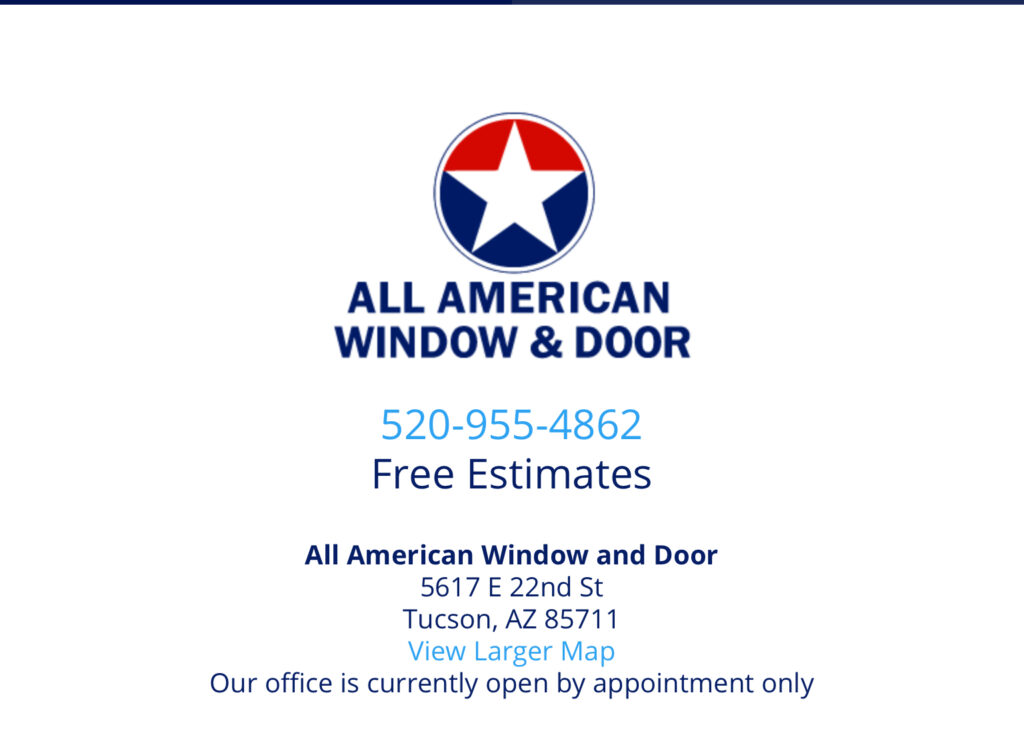