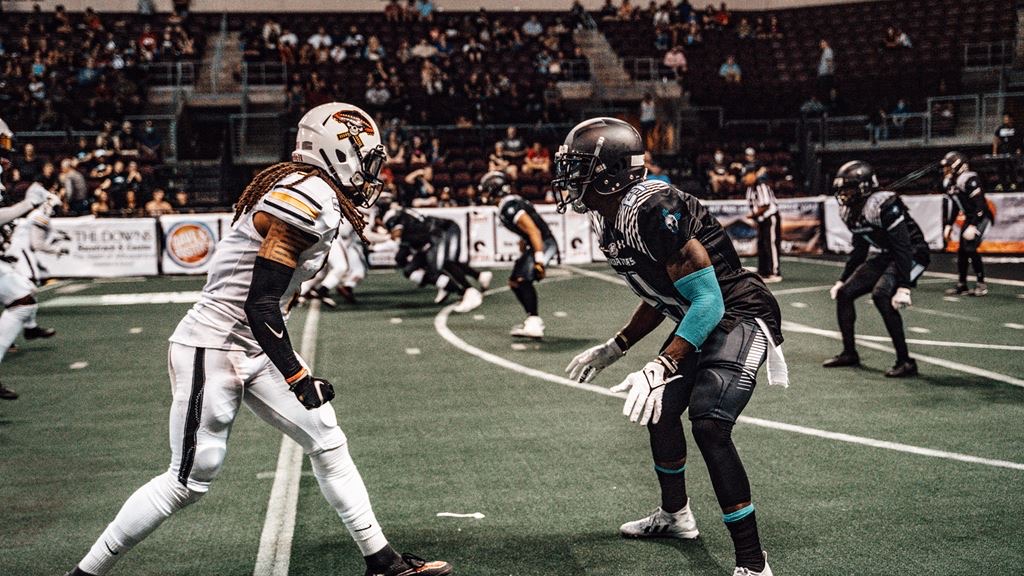 (Albuquerque, NM)  The Tucson Sugar Skulls spoiled the Duke City Gladiators’ home opener with a 55-35 win in their first ever meeting against each other, carried by a dominant performance from quarterback Demry Croft.

Quarterback Demry Croft showed out in his second start for the Tucson Sugar Skulls with six total touchdowns on the day, five through the air and one on the ground. The rookie quarterback scored at will throughout the game, but was particularly efficient in the first half, when rescored four of his six touchdowns.

Mike Jones shook off a sluggish start to the season with a standout performance against Duke City, where he ran for two touchdowns and caught another. Wide Receivers Ryan Balentine and Kent Shelby II each left their mark on the game as well, catching a pair of touchdowns. Shelby II leads the team with three touchdown receptions in the first two games.

The Gladiators looked lost in the first half against an airtight Sugar Skulls defense, which came up with three interceptions in the game. Mike Minter grabbed the first, followed by Delondo Boyd and Cory Butler-Byrd, allotting for three total takeaways in the first half. Butler-Byrd now has two fumble recoveries, an interception and a forced fumble in his first two games of the season.

The front line of the Sugar Skulls did not earn any sacks, but the pressure on defending IFL Offensive Player of the Week, Nate Davis, was evident. The pressure forced several turnovers and threw the opposing offense into disarray on several occasions throughout the game.

The Sugar Skulls got out to a hot start with Croft and the offense scoring five times in the first half. The defense forced all of their turnovers in the first half as well, to build a 35-6 lead at halftime. The teams traded punches in the second half with a flurry of scoring from both sides. Duke City attempted two onside kick attempts and Tucson recovered both to put an exclamation point on an all-around dominant win, moving to 1-1 on the season.

The Sugar Skulls will return to Tucson to play their first home game of the season against head coach Dixie Wooten’s former team, the Iowa Barnstormers. Wooten helped bring the Barnstormers their first ever IFL Championship win in 2018, coaching the likes of five current Sugar Skulls players on that team. In their only meeting to this point, the Sugar Skulls defeated the Barnstormers in their inaugural 2019 season. Kickoff for Tucson’s home opener against Iowa will take place at Tucson Arena on Saturday, June 5 at 6:05 p.m. MT.