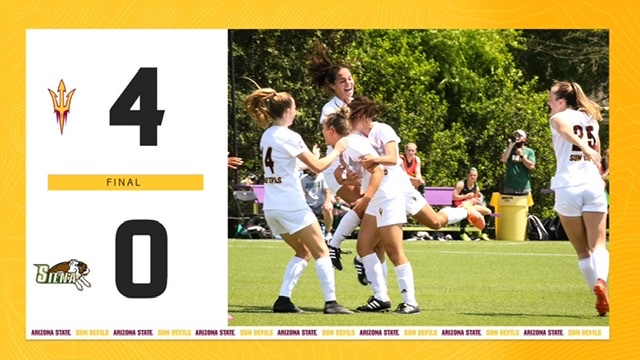 Share
Tweet
Share
Share
Email
Comments
(Greenville, NC)  Moving on! Sun Devil Soccer (9-5-2) unleashed a scoring machine on Siena in the first round of the NCAA Tournament, dominating 90 minutes in a 4-0 shutout win on Wednesday morning. Arizona State faces No. 9 overall seed Duke on Saturday, May 1 at 9 a.m. MST.

The Sun Devils put on a masterclass in all-around match control, taking 24 shots and ten on goal while holding the Saints to seven shots and only one on target.

Junior forward Nicole Douglas collected the game-winning goal in the first ten minutes of play, capitalizing on a deflected shot by Eva van Deursen that she sent to the back of the net with a quick one touch. It is her ninth goal of the season and the 29th of her career.

ASU continued to pressure through the first frame and went all-in on its offensive power in the second half. Eleven minutes after halftime, defender Lucy Johnson found herself with her first goal of the season, extending the ASU lead to 2-0. The scoring train didn’t stop there. Eight minutes later, Lieske Carleer scored off a set piece with assists from Johnson and Olive Jones.

Enter Cori Sullivan for good measure. The Arizona native wanted in on the action, going for five shots in the final three minutes of regulation. Her determination finally paid off as she collected the fourth and final goal of the match in the 89th minute.

“Only seven ASU teams have made it to the NCAA Tournament.. and there’ve been some incredible players coming through as our alumni since 1996 when it began… So it’s exciting for me to see these young ladies who have now etched their names in the same history level as that group and are now one opportunity away from the Sweet Sixteen which is something that we’ve talked about since we arrived here,” said head coach Graham Winkworth

ASU’s four goals are the most the Saints have conceded in a game all season. Before the NCAA Tournament, Seina conceded only three goals all season.

Thanks to an impenetrable back line, Giulia Cascapera was forced to make only one save through 85 minutes of play. She collected her sixth shutout of the season which ties her for fifth in ASU’s single season records.

UP NEXT: ASU faces No. 9 overall seed Duke on Saturday, May 1 at 9 a.m. MST. Duke (10-5-3, 4-2-2) played its regular season in Fall 2020 and added on several non-conference matches in March and April before earning a first round bye in the NCAA Tournament.

“We’re grateful just to play – but to play against teams with such prestigious histories like Duke, what a cool opportunity,” said Winkworth. “We’re going to be excited, we’ll rest and recover tonight and then we’ll look to do a lot of work over the next few days in preparation for one of the national powers.”

The Sun Devils looked to pressure early, and Douglas had the answer. Siena’s backline wasn’t enough to stop Eva van Deursen’s shot in the box was deflected by a defender and sent directly to Douglas on the right side of the goal. With one touch, Douglas tallied her ninth goal of the season in the 10th minute of play.

ASU attacked accurately, nailing three shots on goal in the first 30 minutes of regulation. Alexia Delgado saw a great opportunity in the 30th minute from the top of the box but was blocked by a Saints defender. On the other end of the pitch, the ASU defense stifled the Saints, holding them to zero shots on goal.

With 10 minutes left, Cori Sullivan played into another scoring chance for the Sun Devils with a big shot that forced a save by the Saints goalkeeper.

ASU finished the first half with five shots on goal and held Siena to only three shots, zero on target.

Like the first half, ASU entered the second half firing. Olivia Nguyen kicked her third shot of the match that Siena’s netminder eventually saved. Nguyen would go for another one and then set up Douglas for a shot from the left that couldn’t find the back of the net.

After a stream of Sun Devil opportunities, Lucy Johnson made her mark – scoring her first collegiate career goal with a long cross from the right corner on top of the box. The Sun Devils extended their lead to 2-0 at the 62nd minute.

Relentless offensive pressure sealed the deal for ASU as Lieske Carleer scored the third goal of the match off of a set-piece.

Kiki Stewart unleashed a dangerous chance, bringing Siena’s keeper to the top of the box and directing a shot just past the left post.

In the final minutes, it was clear Cori Sullivan was hungry for a goal. She tried and tried, kicking five shots in the last three minutes of play. She beat out a one-on-one challenge with a Siena defender to tally the fourth and final goal of the match.