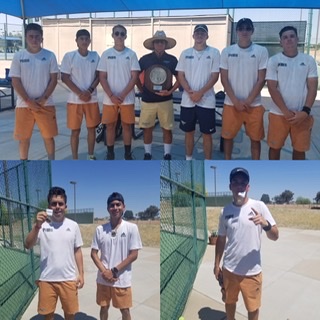 (Tucson, AZ)  The Pima Community College men’s tennis team closed out play in the NJCAA Region I Championships on Wednesday at the Paseo Racquet Center in Glendale.

Freshman Mitchell Wilkinson (Catalina Foothills HS) won a thriller at No. 4 singles as he beat Emilio Alvarado in three sets 6-4, 3-6, 6-3 to win the NJCAA Region I title.

Wilkinson and No. 2 doubles partner Anton Nazaroff (Catalina Foothills HS) lost in their finals match to Leandro Prado and Max Beasley 6-1, 6-3. Nazaroff almost forced a third set in his No. 2 singles match but fell to Prado 6-1, 6-4.

The No. 1 doubles duo of sophomore Corey Pabst and freshman Mason Lee (Catalina Foothills HS) dropped their No. 1 singles championship match 6-1, 6-1 to Beto Carlon and Cameron Khan. Pabst lost at No. 1 singles to Carlon 6-1, 6-1 and Lee could not overcome Khan at No. 3 singles as he lost 6-2, 6-1.

The Aztecs qualified for the NJCAA Division I National Championships on May 17-21 at Collin College in Plano, TX.