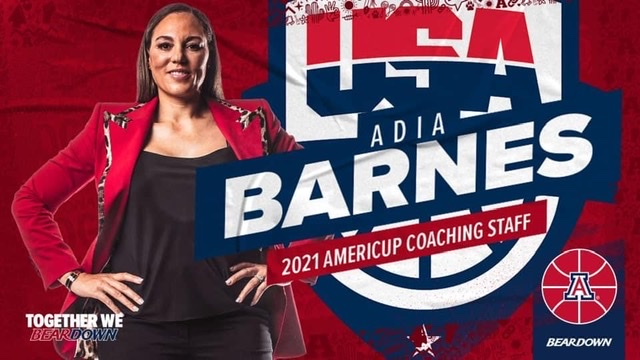 (Colorado Springs, CO)   Adia Barnes, who is coming off Arizona’s first trip to the National Championship game, will be an assistant coach to Dawn Staley on the 2021 USA AmeriCup Team.

“I am incredibly honored to represent the United States and assist coach Dawn Staley and USA Basketball for the 2021 AmeriCup,” said Barnes. “This has been a basketball dream of mine and I can’t wait to represent my country. The opportunity to work alongside coach Staley and coach Rizzotti and the most talented basketball players in the world is an honor. I cannot wait to get in the gym with these athletes and represent USA Basketball with pride.”

The USA team that will compete in the AmeriCup will be comprised of current collegiate athletes, and invitees to attend the April 18-21 team trials, held at the University of South Carolina, will be announced at a later date.

Ten nations from North, South and Central America and the Caribbean will take part in the 2021 AmeriCup, held June 11-19 in Puerto Rico. The top four finishing teams will advance to compete in one of four 2022 FIBA World Cup Qualifying Tournaments in hopes of earning one of the 12 spots in the 2022 FIBA World Cup field. Australia, host of the 2022 World Cup, and the 2020 Olympic champion, earn automatic berths to the World Cup, but will be required to participate in the qualifying process.

“Adia Barnes has quickly proven herself to be one of the top coaches in our country, and Jen brings a wealth of international experience to the staff. I’m also excited to be able to work with a younger group of athletes this summer,” said Staley.

Barnes is less than a week off of coaching in the National Championship game, which was the bookend to the most successful season in school history.

The Wildcats won 13 Pac-12 games and finished in second place while winning 20+ games for the third season in a row. Arizona’s run in the NCAA Tournament made Barnes the fourth coach to lead her alma mater to the National Championship game.

A WBCA Coach of the Year Finalist, Barnes helped Arizona become the first ever team to reach the National Championship after missing the previous 10+ tournaments. Prior to this season, Arizona hadn’t advanced past the Sweet 16.