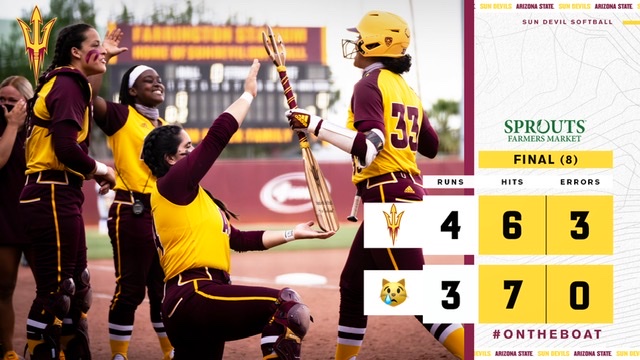 The No. 13 Sun Devil Softball team (28-11, 9-6) took care of some Sunday cleaning at Farrington Stadium, completing the conference sweep of No. 8 Arizona (27-8, 6-5) with a 4-3 walk-off win in the series finale behind Denae Chatman’s two-homer effort and Maddi Hackbarth’s game-winning hit.

The Sun Devils’ sweep of their in-state rival is their first since 2012, and the first series win versus the Wildcats in the Trisha Ford era. It’s also the team’s first sweep of a Pac-12 opponent this season.

And who else could it have been but Maddi Hackbarth to send the Wildcats packing? Hackbarth ripped a one-out double that trickled into the corner in left field, allowing Jazmine Hill to motor home from first base to score the game-winning run in the eighth.

The Sun Devils took three of four from the Wildcats this weekend, with the finale serving as the cherry on top of a phenomenal series. The second game of Saturday’s double-header, which the Sun Devils lost, was a non-conference game.

ASU jumped out to an early 2-0 advantage in the second inning, when Denae Chatman blasted a two-run shot that cleared the center field wall with ease. The Wildcats knotted the game at two in the fourth, when they added a two-run shot of their own.

Chatman struck again in the the fourth with her second homer of the day, and her seventh on the year, this time a solo jack to straight-away center field to push the Sun Devils back out front, 3-2.

Pitching for a third consecutive day,  Allison Royalty tossed 3.1 innings, with the two-run shot in the fourth serving as her only blemish this afternoon. She finished allowing just three hits and two earned runs while striking out three and walking one. Royalty’s three punchouts nudged her to just two shy of 100 in her career.

Lefty Lindsay Lopez relieved Royalty, and she was rock-solid before a seventh inning stumble. But Lopez settled down tremendously, throwing a pivotal scoreless eighth that gave the Sun Devils momentum.

The Sun Devils tagged Arizona starter Hanah Bowen for three earned runs, the most she’s allowed since February 28, 2020. Bowen’s two home runs allowed today were the most she’s ever surrendered in a start.

Denae Chatman got the Sun Devils on the board in the second, when she launched a monstrous two-run shot to center field that clanged off a palm tree well beyond the fence.

Royalty ran into trouble in the fourth, when the Wildcats punched a two-run homer of their own and knotted things at two apiece. Royalty was lifted for Lindsay Lopez, who quelled the Wildcats from further damage. With two runners on and just one out, Lopez buckled down for a strikeout and a sharp groundout to keep the tie intact.

Chatman’s big bat struck again in the fourth, as she ripped her second home run of the afternoon that landed in nearly the exact same spot to give the Sun Devils a 3-2 edge. Arizona righty Hanah Bowen had set down six consecutive Sun Devils before Chatman’s solo shot broke the spell.

Lopez had stress-free fifth and sixth innings, as she allowed just a single hit and struck out two to keep the Wildcats from scoring.

The Wildcats deadlocked the game at 3-3 with a two-out RBI double in the seventh. The Sun Devils couldn’t counter in the seventh, and the series finale headed to extras.

Lopez danced around a two-out threat from the Wildcats in the eighth to keep the game tied.

QUOTES
DENAE CHATMAN
On completing first sweep versus Arizona since 2012:
“It’s amazing. This is something we’ve really been working for. We really made sure we put all of our energy into all of our teammates and we all came together to get this win.”

ALLISON ROYALTY
On pitching three consecutive days against in-state rival:
“Being my freshman year and the first rivalry series this weekend, it meant a lot. I knew it meant a lot to the whole team and honestly, the whole Sun Devil community, so I was there to compete and I knew my team had my back and they were ready to win.

MADDI HACKBARTH
On walk-off win, series sweep versus No. 8 Arizona:
“This was huge for us, huge for the program, huge for the returners that have been here, huge for the girls who have come in, and definitely huge for Coach Ford. She works her butt off for us and that’s what she deserves. She deserves that win, that win yesterday, the win on Friday, too. It’s huge.”

COACH TRISHA FORD
On what this weekend meant to senior class
“I hope they really enjoy this tonight. It’s a great feeling. We came back, obviously we weren’t playing last year and now we’re playing, and to end on a high note, especially against your rivals, I think it doesn’t really get better than that. You forget all of the other ones and just remember the last one.”