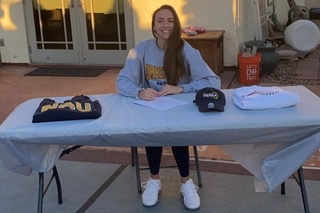 Mich’l, a forward, signed to play at Northern Arizona University in Flagstaff starting in the 2021-22 season. She will play her second year at Pima this spring.

“NAU has been on my list of dream schools ever since I attended my first elite camp with them my sophomore year of high school,” Mich’l said. “I thought the campus was breathtaking. Coach (Loree) Payne and her coaching staff were always welcoming, and every time I left their camp I felt my game had improved, I knew at that point that I wanted to play for them.
“Since I am from Las Vegas, and NAU is only a four hour drive from home, my family is able to visit and watch me play.”

“Pima has been nothing but a blessing for me. Coach Todd (Holthaus) and his coaching staff have done an amazing job in making sure that I am prepared as a player on the court and as a student in the classroom,” Mich’l said. “Pima has also helped my transition from high school to college and I’ve been able to play the best basketball I’ve ever played here at Pima.

“I know that when we get the opportunity to play again, Coach Todd and his coaching staff will lead us to victory within our season, along with having me prepared mentally and physically for my next transition to the Division I level at NAU.”