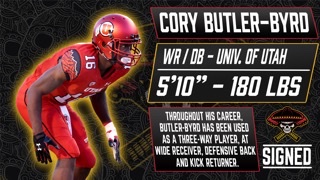 Playing both wide receiver and defensive back, he spent the majority of his junior season at cornerback, totaling 30 tackles, seven passes defended and three interceptions. His senior season, Butler-Byrd primarily played receiver, making 29 receptions for 372 yards, while also adding 20 rushes for 163 yards and one touchdown. On the special teams unit, he also returned 20 kicks for 549 yards (27.5 yards per return) and two touchdowns. Prior to attending Utah, the Compton, California native spent two years at L.A. Harbor College, nearby his hometown.