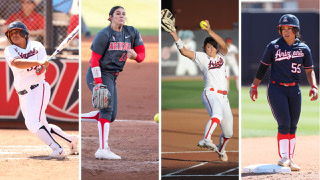 (Tucson, AZ)  Four Wildcat alumnae — Katiyana Mauga, Taylor McQuillin, Danielle O’Toole and Mandie Perez — are set to participate in the inaugural season of Athletes Unlimited, a startup professional league that will take place from Aug. 29 to Sept. 28 in Rosemont, Illinois.

Arizona’s four participants in the league are tied for the second most of any school. The four Wildcats will continue their professional careers with Athletes Unlimited after the National Professional Fastpitch season was canceled due to the coronavirus.

Athletes Unlimited will feature an alternate scoring system that will assign points to individuals based on player performances in the games. Teams will be re-drafted each week to produce greater team parity and highlight individual parity. A full description of the league’s scoring system, rules and unique format can be found HERE.

The league secured national television partners and every game will be either televised or streamed by the ESPN Family of Networks or on CBS Sports Network. A full schedule complete with TV info can be found HERE.

Mauga (2014-17) is the Arizona and Pac-12 career home run record holder (92) and second in NCAA history. The two-time All-American was named the 2017 Pac-12 co-Player of the Year as well as the 2014 Pac-12 Freshman of the Year. Mauga returns to professional ball after winning the NPF title with the Scrap Yard Dawgs in her lone season in the NPF (2017).

McQuillin (2016-19) was a first-team All-American in 2019, when she led the Wildcats back to the Women’s College World Series. McQuillin was named all-conference all four seasons in Tucson, the first UA pitcher to accomplish that since Alicia Hollowell (2003-06). McQuillin is a member of the Cleveland Comets in the NPF and of the Mexican Olympic Team as well.

O’Toole (2016-17), a first-team All-American and the 2017 Pac-12 Pitcher of the Year, went 56-17 with a 1.69 ERA in her UA career, the eighth lowest career ERA in school history during the Yellow Ball Era (1994-present). O’Toole was a first-team all-Pac-12 pitcher in both of her seasons in the league. O’Toole is a current member of the Chicago Bandits in the NPF and will pitch for Team Mexico in the Tokyo Olympics next summer.

Perez (2013-17) was first-team all-Pac-12 performer as a junior and a senior with the Wildcats. A career .344 hitter and Arizona’s leadoff hitter, Perez finished first or second in the Pac-12 in runs scored as a junior and as a senior. Perez returns to professional ball for the first time since 2017, when she competed for the USSSA Pride in the NPF; she was signed to compete for the California Commotion this season prior to its cancelation.