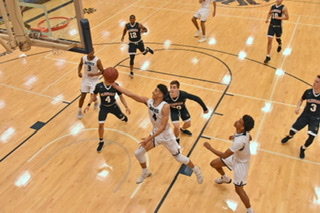 Murphy, a guard, will play professionally in the Japanese B-League for the Hiroshima Dragonflies he announced on twitter on Sunday.

“I am excited to be returning to my home country of Japan to start my career as a pro basketball player with the Hiroshima Dragonflies,” Murphy said. “I look forward to meeting my new teammates very soon and working hard to help the team make a great impact in their first season in the B1 League.”

He graduated from Eastern New Mexico University where he has played the last two years. He averaged 8.1 points in 23.8 minutes in his career with the Greyhounds.

In his time at Pima, Murphy helped lead the Aztecs to a runner-up finish at the 2018 NJCAA Division II National Tournament. He played in all 36 games his sophomore season and averaged 15.9 points and 4.1 rebounds. He was selected first team All-ACCAC and first team All-Region I, Division II.

He was selected to the U19 Japan National Team and played in the FIBA U19 Basketball World Cup last July.