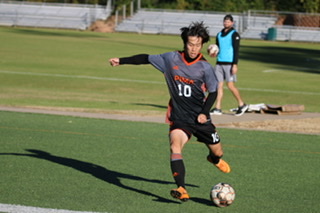 (Tucson, AZ)  Pima Community College men’s soccer player Itsuki Ishihara has found a new home where he will continue his educational and athletic endeavors for the next two years.

Ishihara, a midfielder from Hyogo, Japan, signed to play at Mount Mercy University, an NAIA school in Cedar Rapids, Iowa. The Mustangs play in the Heart of America Athletic Conference.

“I chose Mount Mercy University because their conditions were in place and they gave me the (tools) I want to continue my career in a good environment,” Ishihara said.

Ishihara helped the Aztecs get back to the national tournament this season and scored a goal and had an assist.

“The two years I experienced at Pima were very fruitful,” Ishihara said. “I had never experienced the joy of becoming a national champion. Arguably the best thing in my life.”

The Aztecs went 41-6-2 in Ishihara’s two years with the Aztecs.