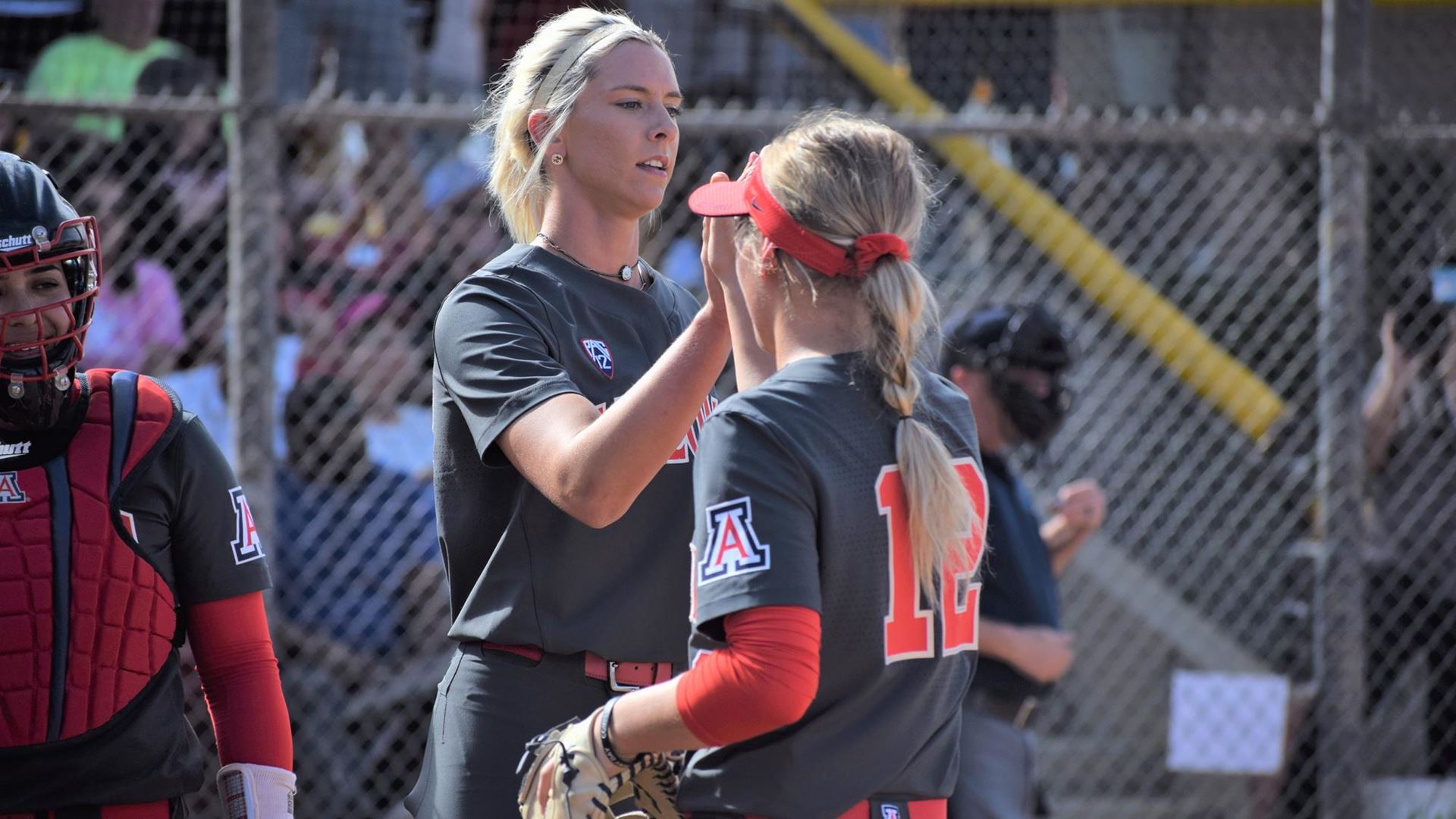 The Wildcats (11-3) have split both days 1 and 2 of the Mary Nutter Collegiate Classic and will wrap up the event vs. Auburn on Saturday at 10:30 a.m. MST.

Alyssa Denham threw a one-hit shutout with a season-high 10 strikeouts and the offense supported her with 10 runs, eight of which came on three home runs, as the Wildcats defeated San Diego State, 10-0, in Friday’s first game.

Denham (4-0) allowed just one hit, a second-inning single, in her third shutout of the season. She fanned a season-most 10 while walking just two Aztecs in the game.

Arizona hit three home runs, three-run shots from Jessie Harper and Marissa Schuld, and a two-run homer by Ivy Davis. For Harper, it was the second consecutive game with a home run and gave her a Pac-12-lead-tying five in 2020 and 71 for her career. For Davis and Schuld, it was their second homer of the season each.

After a quiet first two innings, the Wildcats struck first in the third. After a pair of walks opened the inning, Reyna Carranco singled in Janelle Meono to give the Cats the lead. Arizona would then load the bases with nobody out, but could only get one more on a Sharlize Palacios sacrifice fly.

In the fifth, Arizona put up five runs, all coming a pair of home runs from Jessie Harper, a three-run shot, and later Ivy Davis, a two-run homer.

Arizona added three more in the seventh on a Marissa Schuld home run.

In a heavyweight battle between No. 5 Arizona and No. 7 Florida, it was the Gators who landed the final punch, a sixth-inning RBI single to break a 2-2 tie and help Florida prevail, 3-2.

The Wildcats twice came from behind to tie the game, erasing a 1-0 Florida lead with a Sharlize Palacios in the fifth and then erasing a 2-1 deficit with an Alyssa Palomino-Cardoza RBI groundout in the sixth, but both times, the Gators punched right back.

Arizona had its opportunities early in the game, putting its leadoff runner on in each of the first five innings, but could not bring it around to score until the fifth. The Wildcats had two-on with fewer than two outs in each of the first three innings, including a second-and-third, no-out situation in the second that the Wildcats were unable to capitalize on. In all, Arizona stranded 10 runners in the game. The Wildcats outhit the Gators, 8-6 on the afternoon.

Alyssa Denham took the loss for Arizona, allowing one run on three hits in two innings of relief. She struck out three Gators in her brief relief stint. It was Denham’s first loss of the season; she fell to 4-1 on the year. Denham relieved Mariah Lopez, who allowed just three hits over 4.0 innings, but two of them were solo homers. The two Wildcat pitchers combined to walk six batters in the game.

Florida got on the scoreboard first in the bottom of the third. Charla Echols hit a solo home run with one out in the frame, her sixth of the season.

The Cats finally broke through to tie the game in the fifth. After a leadoff single by Alyssa Palomino-Cardoza and an intentional walk to Jessie Harper, Sharlize Palacios singled with two out to tie the game.

Florida got the run right back with a solo homer to lead off the bottom of the inning.

In the sixth, the Cats capitalized on a pair of errors to tie the game. Freshmen Isabella Dayton and Janelle Meono hit back-to-back singles before an error moved them both into scoring position. Another error plated a run to tie the game and put runners at the corners with one out, but the Gators turned two on a sharp line drive to end the inning.