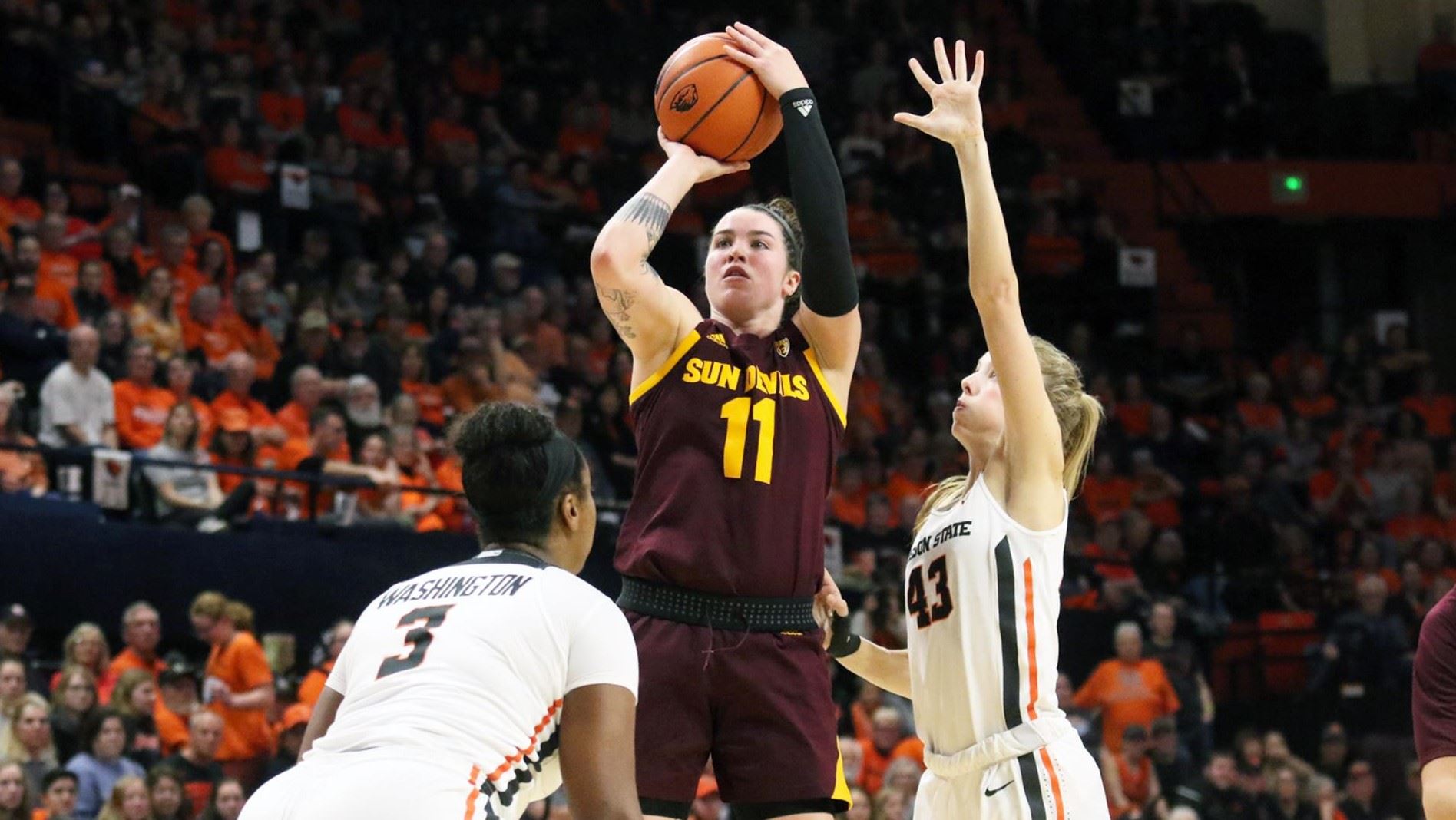 Share
Tweet
Share
Share
Email
Comments
(CORVALLIS, OR)  In another classic, down-to-the-wire matchup between the two schools, the No. 19 Arizona State women’s basketball team and No. 9 Oregon State went toe-to-toe in a contest in which both teams battled until literally the very last second. In the end, the Beavers used a four-point flurry in the final 3.1 seconds to come out on top 64-62 and end a four-game losing streak to the Sun Devils.

ASU seniors Robbi Ryan (20 points, tied for game high), Reili Richardson (11 points), Ja’Tavia Tapley (10 points) and Jamie Ruden(eight points) combined to score 49 points for the Sun Devils, who led for more than 34 minutes of game time. The Sun Devils played Friday’s game without starting senior point guard Kiara Russell, who was injured in preparations leading up to the game and is being evaluated on a day-to-day basis.

Ryan’s 20-point effort was her fifth straight game scoring in double figures and her ninth in 12 games. It was the third time in five contests she scored 20 or more points after accounting for 20 at Washington State (Jan. 19) and a career-high 25 in a losing effort at Arizona (Jan. 24).

Like the final score, the teams were relatively even in several key statistics. Both teams shot 42 percent, made the same number of 3-pointers (7) and free throws (7) and matched each other in bench points (16). The Sun Devils were plus two on the boards (35-33), but had four more turnovers than the Beavers (12-8). The Beavers took better advantage of their opportunities, outscoring ASU in both points off turnovers (17-10) and second chance points (7-3).

Friday’s game was the fifth time in the last seven meetings in which the Sun Devils (16-7, 6-5 Pac-12) and Beavers (19-4, 7-4) were separated by two or fewer points at some juncture in the final minute of regulation or overtime.

The Beavers answered with 10 straight points which started a sequence that included five ties and four lead changes in the final 3:40. Richardson (two free throws to tie the game at 56-56), Tapley (layup to tie the game at 58-58), Ryan (jumper to put ASU up 60-58) and Tapley again (jumper to put ASU up 62-60 with 3.1 seconds left) all stepped up and delivered in critical situations down the stretch.

With the Sun Devils 3.1 seconds away from their fifth-straight win over a Top-10 Oregon State squad, the  script flipped in a matter of moments as the Beavers first tied the game on a layup by Kat Tudor with 0.4 seconds remaining. An ASU miscue on the inbounds pass gave the Beavers another opportunity and they would win the game on Mikayla Pivec’s catch-and-shoot attempt at the buzzer.

For the Sun Devils, it was a disappointing end that – until the final seconds – was one of their finest performances of the season.

ASU came out firing as five different Sun Devils –Ryan (jumper), Tapley (jumper), Taya Hanson (3-pointer), Richardson (3-pointer) and Ruden (jumper) – scored in the first 4:04 to help ASU jump out to an early 12-2 lead. The Sun Devils would take their largest lead of the quarter less than a minute later after Sara Bejedi, the sixth different Sun Devil to score, knocked down a 3-pointer to give the Sun Devils a 15-4 lead. The Beavers would get within four later in the quarter but Ryan (3-pointer) and Tapley (jumper) both hit baskets to help ASU take a 20-13 lead to the second quarter.

The Sun Devils once again went up by 11 after Ruden, who made all four of her shots in the contest and scored six points in the second quarter, hit a jumper to put ASU up 28-17. The Beavers scored 13 of the next 18 points to cut ASU’s lead to three with under a minute left in the period, but Ruden’s jumper with 29 seconds left allowed the Sun Devils to take a 35-30 lead into the locker room.

The Beavers scored the first five points of the second half to knot the score a35-35. Five lead changes would ensue as neither team led by more than two until Ryan’s triple gave ASU a 44-40 lead. After an exchange of free throws, the Sun Devils went to the final quarter with a 46-42 lead.

Last month, the Sun Devils handed then-No. 3 Oregon State its first loss of the season, 55-47 in Tempe. The win capped a historic weekend as the Sun Devils became the first unranked team ever to record consecutive wins against Top 5 teams after knocking off then-No. 2 Oregon 72-66 on Jan. 10.

For ASU, Friday’s contest was its third in four games against a Top 25 foe. The Sun Devils lost at current No. 12 Arizona 59-53 on Jan. 24, bounced back to beat USC 76-75 in triple overtime, then dropped consecutive games for only the third time in two seasons with last Sunday’s 70-61 setback to No. 8 UCLA and Friday’s buzzer-beater defeat to Oregon State.

Up next for the Sun Devils is a matchup with third-ranked Oregon on Sunday (2 p.m. PT/3 p.m. MT) in Eugene