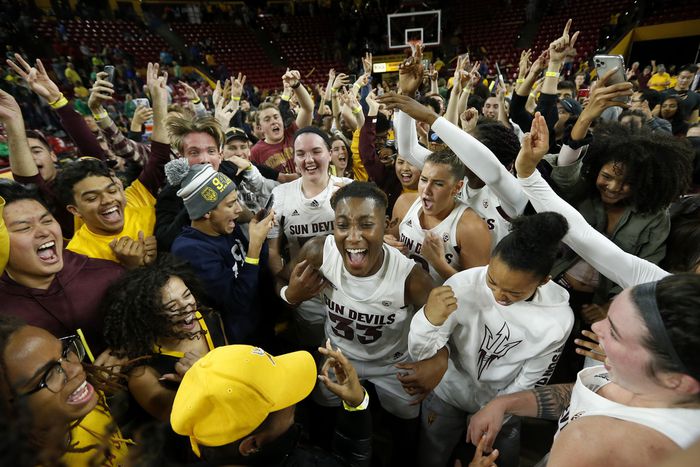 (Tempe, AZ)  Robbi Ryan scored 13 of her 17 points in the second half, Jamie Ruden hit two big baskets late and Arizona State stormed back to upset No. 2 Oregon 72-66 on Friday night.

Ryan hit six 3-pointers in the second half after starting 0 for 2 and Ruden scored twice inside in the final 1:13. 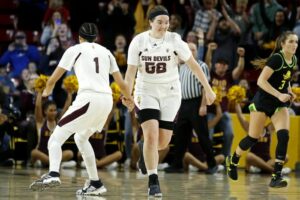 Ruden also grabbed a late offensive rebound and Reili Richardson hit four free throws in the final 15 seconds. Arizona State’s students stormed the court after the Sun Devils beat their highest-ranked opponent since knocking off No. 2 Stanford in the 2002 Pac-10 tournament title game.

The Ducks (12-2, 2-1) dominated through three quarters before falling apart in the fourth, spoiling their chance to move to No. 1 next week following top-ranked Connecticut’s loss to Baylor on Wednesday night. 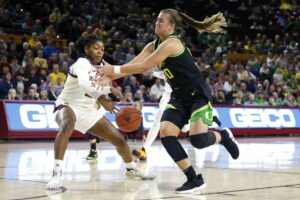 Sabrina Ionescu kept Oregon in it by scoring eight of her 24 points after Arizona State made its run, and Ruthy Hebard added 13 points. The Ducks had 17 turnovers, leading to 17 points for Arizona State, and had no answer when the Sun Devils made their push.

Courtesy of the Associated Press