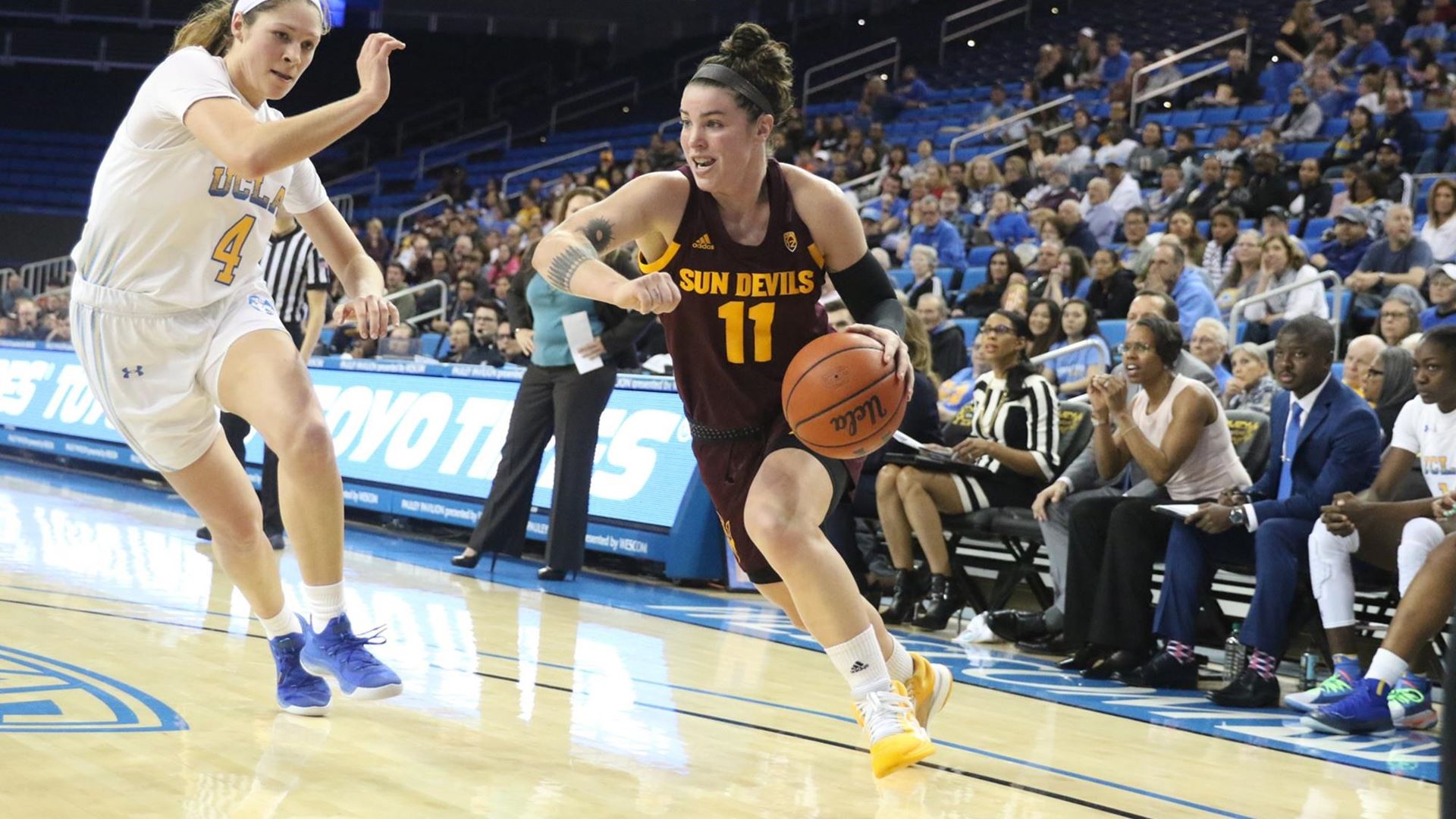 (Los Angeles, CA)   For the second time in as many games, the Arizona State women’s basketball team fell just short in its bid to upset a ranked opponent as the Sun Devils fell to No. 10 UCLA 68-66 on Friday night.

Senior guard Robbi Ryan scored a season-high 17 points and tied her career high with a trio of 3-pointers for the Sun Devils (10-4, 0-2 Pac-12), who fought their way back from an early 11-point deficit to eventually take the lead by shooting 63 percent in the second and third quarters. Ryan led the team despite missing part of the game after an injury forced her off the floor in the second quarter (she would later return to the game).

After being outrebounded by 10 (27-17) in the first half, ASU came back with a dominant performance on the glass in the last 20 minutes and ended up winning the battle of the boards 44-36. Five players had five or more rebounds, led by Tapley who had seven. Russell had six rebounds while Reili Richardson, Iris Mbulito and Walker had five boards each.

Despite the Sun Devils having a 20-16 edge in offensive rebounds, it was the Bruins who made the most of the opportunities as they ended the game with a 16-8 advantage in second chance points.

UCLA’s success shooting from long range ended up being one of the deciding factors as the Bruins were able to knock down 11 triples. Just as significant was UCLA’s efficiency from behind the 3-point line as it was able to hit 52 percent of its attempts. On the flip side, the Bruins hit only 33 percent of their shots from inside the arc.

After starting the fourth quarter tied at 56-56, the Bruins were eventually able to open up a five-point lead near the middle of the frame. The Sun Devils would erase that deficit after a 3-pointer by Ryan and a layup by Richardson on consecutive possessions tied the game at 61-61.

After an exchange of baskets, the Bruins took a 3-point lead after Dean’s fifth triple of the evening with 1:59 remaining. The Sun Devils grabbed a pair of offensive rebounds to extend their ensuing possession and Russell was eventually fouled and made 1-of-2 free throws to get ASU within two, 68-66 with 1:20 remaining. 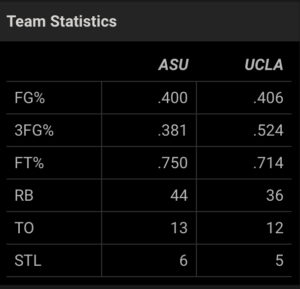 After getting a defensive stop, the Sun Devils would end up possessing the ball for the final 50 seconds of the game. Russell and Jayde Van Hyfte both missed attempts in the paint. An offensive rebound allowed the Sun Devils to restart their possession with the shot clock off. Unfortunately for the Sun Devils, three more attempts to either tie or win the game missed the mark, and, despite a pair of those attempts being heavily contested in the paint, no whistles were blown and the game ended with the Sun Devils falling two points short.

For ASU, Friday’s loss was its second straight by five points or less against a ranked opponent. On Sunday, the Sun Devils opened Pac-12 play with a 58-53 loss at home to No. 18 Arizona.

The Bruins started the game fast, taking a 13-2 lead less than five minutes into the contest.

Ryan was a perfect 3-of-3 in the first quarter and helped ASU close to within five by the end of the quarter, 18-13.