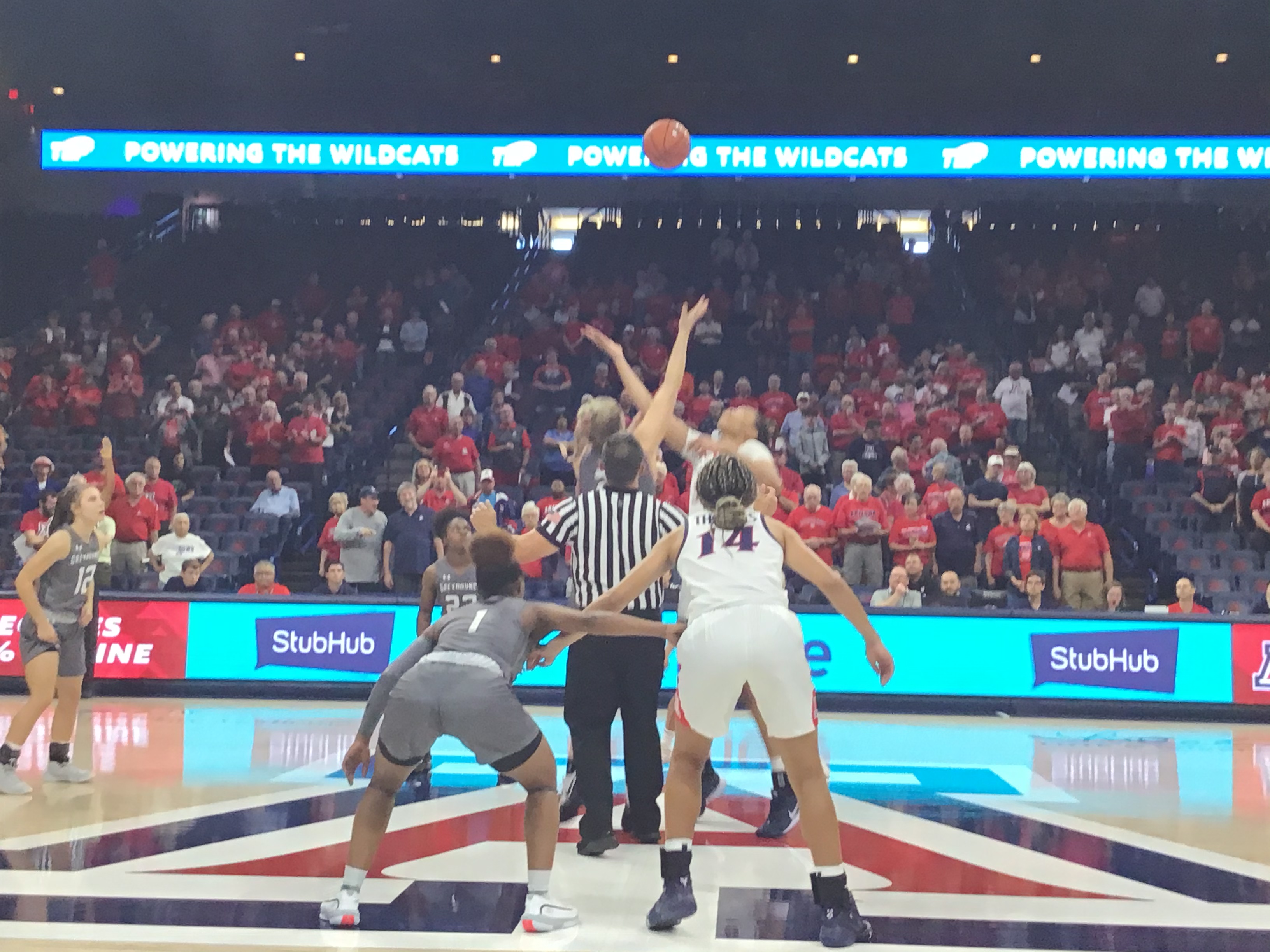 (Tucson, AZ) The 2019-20 version of the Women’s Basketball team will be a contrast to last year and years past under head coach Adía Barnes.

The Cats are full of talent and deep coming off their WNIT Championship last season, with a mix of foreign players that complement the entire returning starting lineup from 2018-19.

A nice crowd came to see this first game, the attendance was announced at. 1,933  . This  is the only exhibition game of the season against the Eastern New  Mexico University.

Barnes held out Cate Reese and  Tee Tee Starks with minor injuries. No need to take a chance on an exhibition game.

As the game began, the Cats got off to a fast start with senior Dominique McBryde hitting two jumpers and a 12-4 lead.

For the first  time in the Barnes era, Arizona will have size down in the paint. 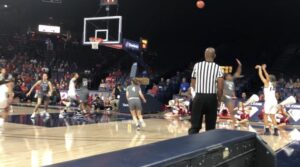 Bryce Nixon hit a baseline three pointer to put the Cats up 21-6. The Greyhounds got a basket with a couple of seconds left to make it 21-8 to end the quarter.

McDonald looked in mid season form as she sank a three ball from the left wing to open the second quarter. At the midway point of the second stanza, Arizona led 31-15.

The Wildcats started to show their size as sophomore Samaj Smith hot three baskets down low in the post and the blowout continued 44-15.

The Greyhounds had no answers in the first half as Arizona came out and smacked them in the mouth. The Cats led at the half 52-17.

What we  took  away from the first half is this year’s squad will not rely on Aari McDonald to do the bulk of the scoring. The Cats spread the ball around, nine Wildcats scored  in the first half, led by McDonald’s eleven points and McBryde’s seven.

Alivia Lewis led ENMU with six points of the seventeen their team had. 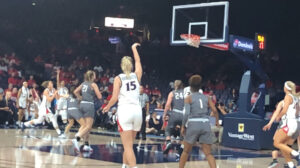 This was a good game to get your feet wet, but things will drastically change come the start of the regular season, especially in conference play with almost every PAC-12 teams better than last season.

At the start of the second half, both teams began slow until Amari Carter hit a three pointer at the 8:25 mark. McDonald followed with her second three with Carter bookending the shot with another trey.

The Cats were up by forty 61-21 and in complete control. The crowd was all smiles and this was the type of game to just to sit back and enjoy.

Nixon’s three pointer at the 3:15 mark of the third quarter demonstrated the improved outside shooting this team will need this season.

The outmatched Greyhounds continued to play hard but the disparity in size and talent was too much to overcome. At the end of three quarters, Arizona had an insurmountable lead 74-27.

Barnes substituted freely in the fourth quarter which she hadn’t been able to do in her previous three seasons with a short bench.

The six minute mark in the final period, Arizona had a 77-33 lead content to run their offense and work on the system the coaching staff had put in place. 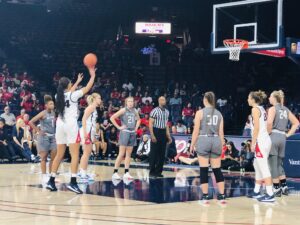 Eastern New Mexico shot just 24.1% from the floor and were out rebounded 42-24. Games like this will help them into their season as you only get better when you play tougher teams.

The big stats in spite of it being an exhibition game was that twelve players saw action and all twelve scored.

Twenty eight points in the paint was a stark contrast to years past where Arizona was the team to give up size down low.

According to Barnes, the freshman players all from outside the United States played well. She added that those players are accustomed to playing away from home from fourteen years old and up. This lessens the initial adjustment to college life as most American players have to adjust.

So a new year, a new team with seven newcomers to mesh with  all  five starters from last season will make this year’s Wildcat team fun to watch and see how they progress with a goal of making  the NCAA Tournament come March of 2020.