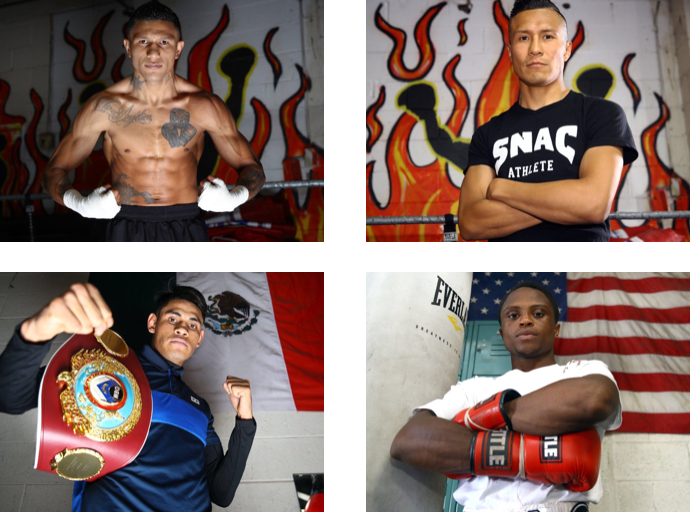 (Tucson, AZ)  Top Ranked Boxing came to. Tucson along with ESPN for a nationally televised fight card. Local Promoter Michelle Rosado from Raging Babe Promotions was instrumental on bringing these bouts to the Old Pueblo.

To start out the boxing card, Super Lightweights Migue Parra took on David Morales in a scheduled six round fight. 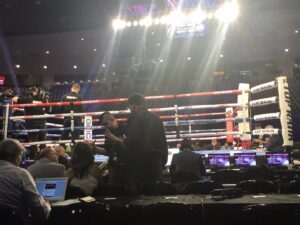 Morales looked nervous and didn’t throw many punches as the round was easily won by Parra. At the conclusion of the first round, Morales told his corner he was retiring from the bout. Parra won by a TKO. 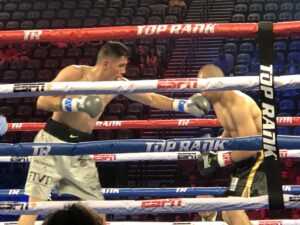 The fight was very even as both fighters went back and forth with punches. At the conclusion, Guajardo won by a majority decision.

The third bout scheduled for eight rounds was between two Columbian boxers; Miguel Marriaga and Rueben Cervera in a Lightweight bout. 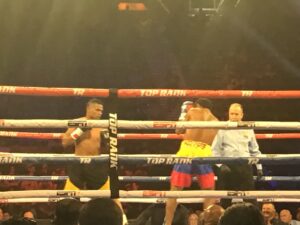 Marriage went to the body several times and knocked down Cervera in the first round.Marriaga continued to be the aggressor in the second round as he continually got off his punches and forced Cervera to be on the defensive. Once again, there was a shortened bout by way of Cervera retiring after the third round. Miguel Marriaga won by a TKO.

In the WBC Continental Americas Title Super Bantam Weight bout, Mario Diaz went up against Carlos Castro which was scheduled for ten rounds.

Castro went right at Diaz knocking him down in the early stages of the first round. Diaz picked up his game in the second round coming out more aggressive, but the round was very even. 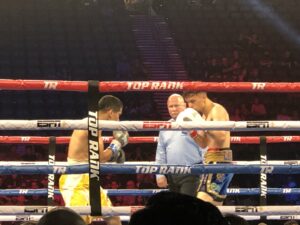 In the fourth round, Castro started  going to the body in an attempt to lower the gloves of Diaz. This was the first  bout of the ticket that both boxers went toe to toe.

Going into the last two rounds, Diaz had evened up the bout,bu the first round knockdown was still the edge that Castro carried. The tenth and final round, Diaz gave it all he had but Castro won every round by the judge’s score cards and retained his title.

The Super Lightweight featured the 2016 Olympic Gold Medalist Fazlidden Gaibnazarov from Uzbekistan, After turning pro, he’s had seven fights winning all of them with four Ko’s. On the other side of the ring, Mykal Fox from Upper Marlboro, MD had a decisive edge being 6’ 4” to Gaibnarov’s 5’ 6 “. 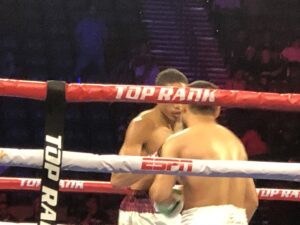 The fight was relatively uneventful as both fighters didn’t show much aggressiveness. A point was deducted in the seventh round from Gaibnazarov for using his elbow, he had been warned earlier in the fight. A repeat of the last round as once again another point was taken away from the Olympic Champion for the same infraction.

The judges unanimously gave it to Fox due to the two points that were deducted and although not an aggressive bout from either corner, nonetheless the victory for Fox.

In the sixth bout, ESPN joined to party to televise the matchup between Isaac Dogboe and Emanuel Navarrete for the Super Bantamweight WBO World Belt. 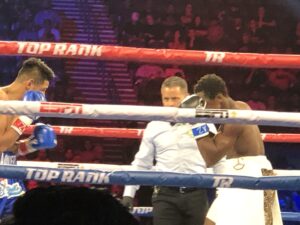 Dogboe from Ghana and Navarrete hailed from Mexico. Both National Anthems were performed prior to the fight. This is a rematch of their last fight where Navarrete took the belt from Dogboe,

both boxers came out swinging but you could see early on that Navarrete was quicker to the punch and had Dogboe in trouble almost knocking him down in the third and fourth rounds.

Dogboe knowing he was behind, landed some body shots in the fifth round slowing down Navarrete.

Navarrete came back in the sixth round to regain his dominance as the crowd came alive chanting “Vaquero, Vaquero.” The Tucson crowd was squarely behind Navarrete.

With his right eye swollen, Dogboe at times was hanging on ro Navarrete, but going pinto the seventh round “El Vaquero” wasn’t able to put him away. 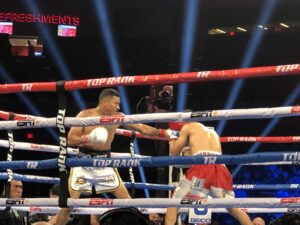 The ninth round was toe to toe punching from both competitors although Dogboe nearly went down twice late in the round, only the ropes saved him from a knockdown. He said later that he had injured his thumb.

Navarrete continued to go pound away on Dogboe’s head worsening his swollen eye. Midway through the final round at the 2:12 mark an overhead right from Navarrete knocked down Dogboe and seconds later, his corner threw in the towel ending the fight.

The Main Event pitted Francisco Vargas from Mexico City against  Miguel Berchelt from Merida Mexico for the 130 pound Super Featherweight WBC Belt. This was scheduled for twelve rounds.

Vargas held the belt before he lost it to Berchelt. It his fifth bout in defense of his  title. The last fight between these two Vargas was cut and when it got worse, the referee stopped the fight. 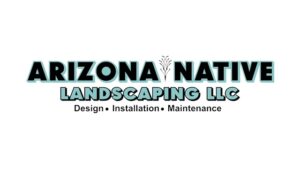 The opening round saw both boxers throwing shots, but also trying to discover a weakness in the other.

The second round saw some serious boxing as well. This indeed was a championship caliber fight. Berchelt landed a few head shots that swelled up the face of Vargas.

Berchelt’s strategy to continue to work on the head of Vargas. With each passing round, Vargas’s face looked worse from the barrage of punches thrown by Berchelt. Vargas however continued to fight back seemingly unfazed.

The sixth round was more of the same with Vargas taking a lot of punishment to the head. He still fought back, but at the end of the round his corner didn’t permit him to come back out for the seventh round. Berchelt won by a TKO and retained his WBC belt.

Three of the seven bouts saw fighters quit before the end of the match. The announced crowd was 4,400 inside the Tucson Convention Center. 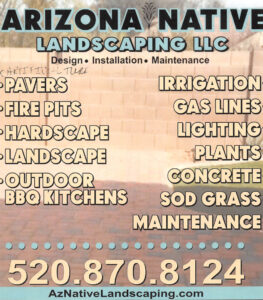