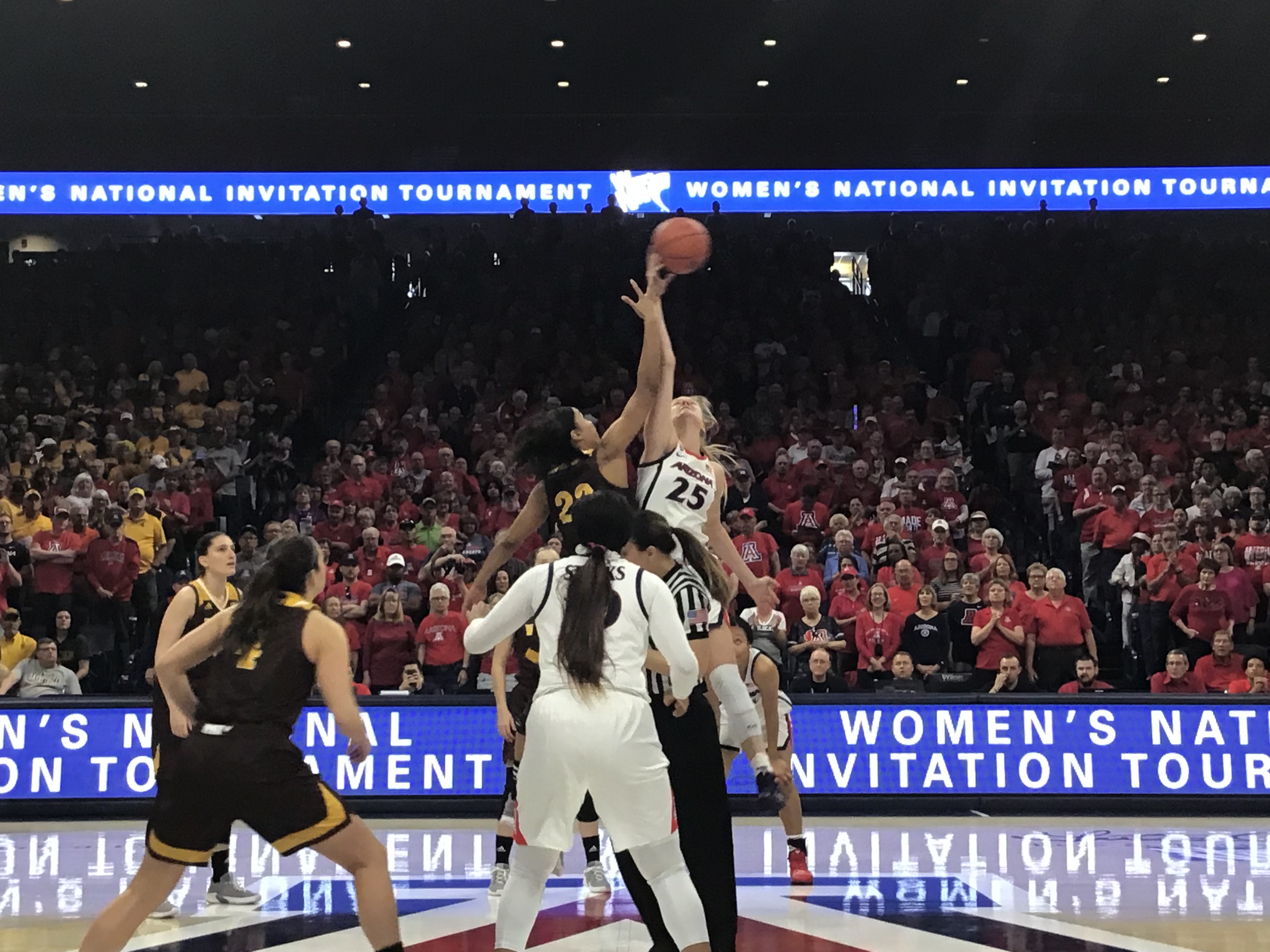 (Tucson, AZ)  It took fifty eight seconds but the Cats sank their first three by sophomore guard Aari McDonald and thirty two seconds later she scored a layup. Senior forward Tee Tee Starks scored in transition, Starks scored again off a missed shot and the Cats were up 11-0. 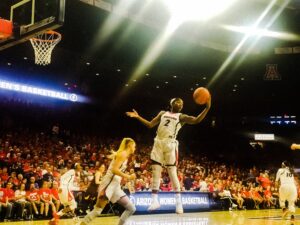 Wyoming scored its first basket at the 5:54 mark of the first quarter by Karla Erjavec, but the Cate Reese came right back and scored off the block.

The Cowgirls didn’t know what hit them as they hadn’t played a team with this kind of speed in the Mountain West Conference.

Arizona pushed the ball on every possession and the Wyoming players were breathing hard even though they play at 7200 feet above sea level.

Things settled down a bit after the opening few minutes and  the Wildcats led 19-10 after the first period.

Wyoming scored first in the second quarter on a layup by Sladjana Rakovic. Once again the Wildcats answered with a McDonald layup.

Arizona’s defense was in “in your face” man to man often extending out farther on the perimeter.

McDonald came into this game with a purpose as she hit another three and was 2-2 from beyond the arc early. 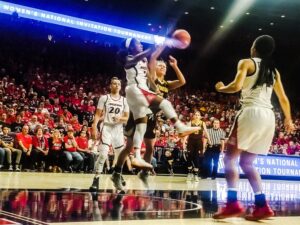 The enthusiasm was a bit tempered after the second period when both teams combined to score only twelve points the entire quarter a 7-5 Arizona advantage.

Wyoming had problems scoring only hitting 6-27 (22.2%) from the field in the first half.

The Wildcats had issues themselves going 3-13 (23.1%) in the second quarter. Arizona still maintained 23-16 edge on the glass.

Junior Dominique McBryde opened up the scoring for the Wildcats on an interior pass inside.

McDonald picked up her third personal foul with 7:14 in the third quarter forcing head coach Adia Barnes to take her out. Reese picked up the slack hitting a sixteen footer straight on.

The lead grew to twenty when Reese was fouled on a made basket and converted the free throw 37-17.

The Cowgirls made some noise going on a 10-0 run late in the quarter to cut the lead in half 37-27. Arizona took a timeout to stop the bleeding.

McDonald was inserted back in the lineup and due to her foul issues hadn’t scored in the third quarter. The Cats coverted on a nice swing pass from Starks to McBryde. Back came Wyoming as Reese was caught napping on defense. 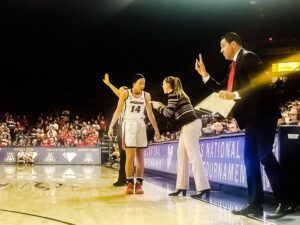 With just a few seconds left in the third quarter, Starks stepped in front of a Cowgirl interior bounce pass to steal and off to the races they went as McDonald scored her first basket of the quarter on a layup as time expired. Cats up 42-29.

Starks continued her stellar performance hitting a three ball from the left wing to open up the final period.

The shots kept coming from downtown as Sam Thomas hit another three from the top of the key and on the next possession, McDonald hit a sixteen foot jumper to make the score 51-31.

A well rested McDonald started to take over as the Wyoming defense as all the PAC-12 already knew couldn’t cover her one on one.

A combination of missing easy open shots, and the lock down defense deployed by Barnes caused the the Cowgirls to expend a lot of energy and had nothing left in the tank in the final period. Wyoming hit their first three pointer of the game at the 4:15 mark of the fourth quarter and they came into the game as the nation’s second best three point shooting team. 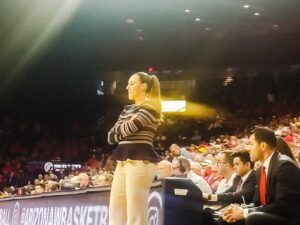 Off a missed shot by Wyoming with 2:59 left in the game, the Cats went into their offense to run clock. This game was well in hand as Barnes emptied the bench.

This was a beatdown not usually seen in a Elite Eight game. The final was 67-45 Arizona.

This was a team effort in spite of McDonald getting  her usual twenty five points. Thomas has three huge blocks, Starks hit shots at crucial times and McBryd played exceptional defense all game long.

Zona shot 47.% from the field and held the Cowgirls to 16-51 shooting. The key was the Cats extending their perimeter defense beyond the three point line.

Another huge benefit is the fact that this young team is getting a taste of postseason and the “one and done” pressure that comes with it. Freshman Reese, Nixon and Smith are gaining invaluable experience that will pay dividends next year and beyond. 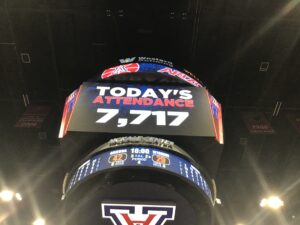 The announced attendance was 7,717 and McKale was loud and proud all game long.

Arizona won the bid to host the Final Four in McKale Center. The Horned Frogs of Texas Christian University will be the National Semi-Final game at 6:30 pm on Wednesday April 3rd.