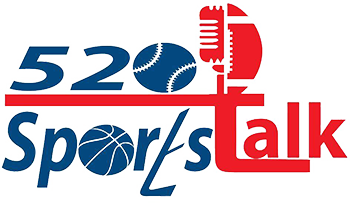 The idea of 520 Sports Talk began in May of 2016. Good friend Al Young and I tossed around an idea of doing a live video sports talk show featuring local athletes from around Southern Arizona. Earlier in the month, the  Arizona Daily Star has made the decision to forgo covering non revenue and high school sports for the most part.

The 520 Sports Talk Show debuted on September 6th, 2106 with Sean Scott and I as hosts and without a guest for the first show. We explained and laid the groundwork for the idea of the show.

Former Arizona Football standout Julius Holt stopped by to help us out and encouraged viewers about our mission to get local sports back on the radar and not just five second highlight clips of a few players.

With the support and endorsement of Julius and other star athletes from around Tucson, we began our journey into the mainstream media.

At the end of 2016, 520 Sports Talk was invited to cover the second annual Arizona Bowl with South Alabama and Air Force competing.

In the press box, I was feeling a little overwhelmed as I was among the “big wigs” of Tucson sports media. To my surprise, I received a very warm welcome from our work to that point.

Long time journalists such as Greg Hansen of the Daily Star, David Kelly of KOLD-TV, Paul Cicala of KVOA-TV and three writers from All Sports Tucson; Steve Rivera, Javier Morales and Andy Morales who were seated below me in the press box encouraged me to continue on the show’s present path.

As the months rolled on we evolved from having just one or two guests on the show with KHIT’s Andy Taylor’s state of the art studio productions in Marana, to live remote shows from local Tucson businesses.

With our success, Tucson businesses started noticing and hopped on board to sponsor us and allowed us to advertise their services and products.

At the onset, I would call to schedule teams and athletes to be guests on the show and explain the nature of the show. Now, coaches and administrators contact us on a weekly basis to come live stream their games or ask to have their teams on 520 Sports Talk.

A couple weeks ago, the All Sports Tucson crew, with their top notch writers approched me to toss around the idea of a merger of forces. I half heartedly had mentioned the same basic idea to great friend Steve Rivera many months earlier. I wasn’t sure how serious I was taken, but the seed had been planted.

Steve and Anthny Gimino laid out a plan to bring the best of both worlds together. Their journalistic coverage of Tucson area sports, and 520 Sports Talk’s “get to know the athletes” approach.

We also encourage the academic side as well as the athletic side of being a student-athlete.

In this merger, both side will benefit from the other’s strengths and offer a fresh new angle to local athletics using social media as our platform.

520 Sports Talk will maintain its brand name as will All Sports Tucson. We both will continue to have the latest in sports news and feature stories on our respective websites.

Thank you to Steve Rivera, Anthony Gimino, Javier Morales, Andy Morales and the rest of their staff. We will work together to be the best sports media outlet in Southern Arizona.